Award-winning author, Erika Kelly, is revealing the cover to THE HEARTLESS BOYFRIEND, the second book in her adult contemporary romance series, Bad Boyfriend, releasing October 16, 2018. See below for the cover, information on the book and series, and preorder links. You can currently pick up THE WORLD’S WORST BOYFRIEND, book 1 in the series, for free for a limited time. 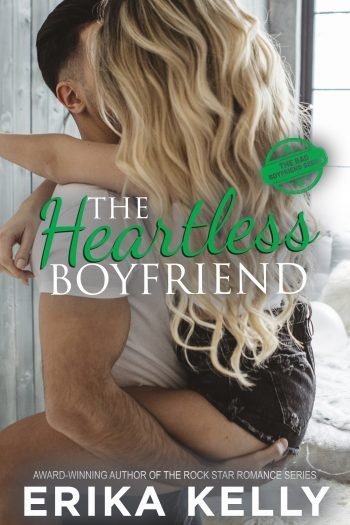 Synopsis
Will Bowie is supposed to be training for the Olympics, but the toddler unexpectedly dropped into his life isn’t interested in his schedules. Still, he’ll make it work. He has to. There’s no way he’ll bail on the little girl—not after his own mom ditched him twenty years ago. He’s pretty sure he’s got things under control…

…until a sexy chef lands on his doorstep and offers a temptation he can’t resist.

Hours after losing her restaurant, chef Delilah Lua flies across the country to participate in a renowned cooking competition in the breathtaking Tetons. Winning would resurrect the dream that’s been stolen from her. If—no, when—she wins, she’ll go home with the capital to open her own place and enough fame to do it with flair. Her roommate, though, is a delicious surprise she hadn’t anticipated…

…but she’s not sure how to have her cake and eat it, too.

Despite the undeniable sparks in the kitchen, Will’s not about to give his heart to another woman who’s leaving, and Delilah must decide if the delectable future she could cook up with Will is worth more than her lifelong dream.

Get Caught Up on the Series – FREE for a limited time!

About the Author
Award-winning author Erika Kelly has been spinning romantic tales all her life–she just didn’t know it. Raised on the classics, she didn’t discover romantic fiction until later in life. From that moment on, she’s been devouring the genre and has found her true voice as an author.

Over three decades she’s written poems, screenplays, plays, short stories, and all kinds of women’s fiction novels. Married to the love of her life and raising four children, she’s lived in two countries and seven states, but give her pen and paper, a stack of good books, and a steaming mug of vanilla chai latte and she can make her home anywhere.