Welcome to the blog tour for AND THEN ONE DAY, the fourth book in her adult contemporary romance series, Magnolia Sound, by New York Times and USA Today bestselling author, Samantha Chase. See below for information on the book and series, buy links, and an exclusive excerpt. 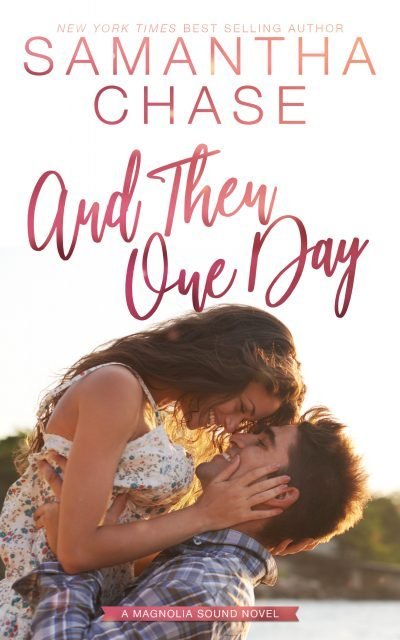 AND THEN ONE DAY (Magnolia Sound Series #4) by Samantha Chase

Synopsis
Courtney Baker is ready to put small town life—and the man she can’t have—behind her. Years of secretly crushing on her best friend’s older brother have led nowhere and she’s finally ready to move on. It would have been a great plan had she not drunkenly blurted out all her feelings and kissed him. At least she’ll be able to forget all about it when she leaves town in less than 48 hours.

It takes a lot to surprise Dean Jones, but a kiss from the girl he’s been secretly attracted to for years does just that. All it takes it one kiss for him to realize he doesn’t want to let her go. But she’s his sister’s best friend and that’s a line he knows he should never cross. Never mind that she seems determined to leave their small town—and him—behind.

When a storm and a broken car stop Courtney from leaving town, Dean sees perfect opportunity to get her out of his system. But can one night ever be enough? 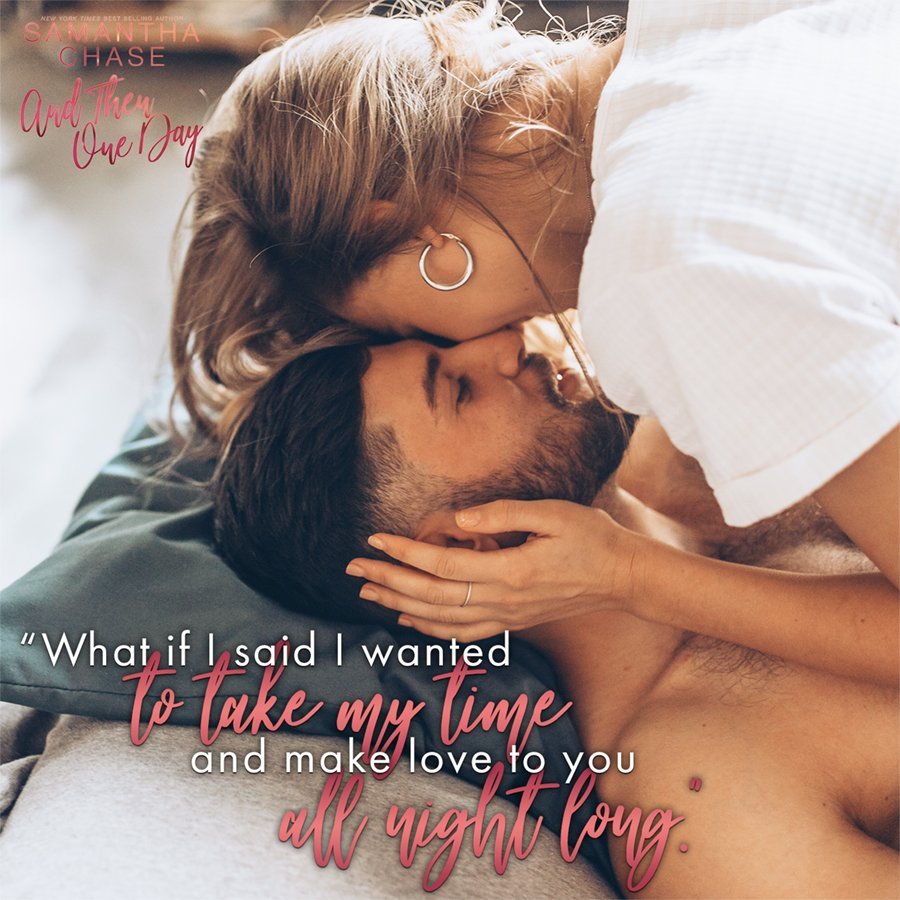 Excerpt
“You sure this is what you want to do? Moving?” he asked, his voice low and deep and…concerned.

“Now that it’s really happening, I’m…I mean…I wish…” Damn. This was all too depressing to talk about and totally not what she wanted to be doing either. Shaking her head, she said, “Can we change the subject? Please?”

“Sure,” he said with a nod, reaching up to caress her cheek and man-oh-man did it feel good.

Swallowing hard, she studied his face. God, he was so handsome. Why was he still single? Why weren’t there women banging down his door?

Although, that would make things pretty awkward if that were to happen right now.

So many thoughts raced through her head and she finally asked, “What are we doing, Dean?”

For just a second, he seemed as if he was going to move away–like he was doubting what was happening–but luckily it didn’t take long for him to get over it.

“Whatever it is that you want, Court,” he said and she swore she could have orgasmed right there on the spot.

Whatever she wanted? For real? Like…anything? She wondered.

If I only have tonight, then I’m going to go for it all…

Before she could lose her nerve, she moved away from him and instantly missed the feel of his hand on her skin. Standing, she moved in front of him and did her best to hold his gaze as she reached behind herself and unzipped her gown. The sound of the zipper going down seemed overly loud in the room, but Courtney didn’t stay focused on that. It was the look on Dean’s face that mesmerized her.

She swore she saw his hand twitch–as if he couldn’t wait to touch her–but she needed to finish what she was doing. This was her first attempt at a striptease, and dammit, she was going to do it without turning into a trembling mess!

Once the zipper was down, she wrapped an arm around her waist to hold the strapless gown in place–all the while not breaking eye contact. Licking her bottom lip, she dropped her arm, and thankfully, the gown floated down over her breasts, over her hips, and to the floor–leaving her standing in a deep purple thong that matched the gown and her stilettos.

Dean’s hand reached out and landed on her hip as he looked up at her to make sure it was okay. Nodding, she silently willed him to stand and touch her everywhere he could at once, but he was a man who clearly enjoyed taking his time.

And hopefully he would.

Right now, she wanted the wild and frantic man who kissed her near the boardwalk earlier.

He stood, his hand still on her hip as he took in the sight of her. She’d been naked with men before, but for some reason, standing here in front of Dean in a thong and heels left her feeling way more exposed than ever before.

“Damn, Court,” he finally said, slowly licking his bottom lip. He met her gaze and his expression was heated and intense and she braced herself for what was to come.

As soon as the words were out of her mouth, it was madness. His arms banded around her as his lips claimed hers in a kiss she could only describe as carnal. With his hands on her ass, he lifted her out of the puddle of her dress and she wrapped her legs around his waist. They were a tangle of lips and limbs and it wasn’t elegant or pretty, but it felt so damn good that she was ready to go up in flames.

She figured he was going to lay her down on the sofa and was surprised when he started walking. His lips left hers to kiss along her jaw and neck and her head fell back to give him better access. Her eyes closed and didn’t open until he stopped moving.

His bedroom was dark. That was the only thing she noticed. As Dean slowly lowered her to the bed, she only had eyes for him. Standing back, he stripped off his tuxedo jacket and then the tie.

Part of her wanted to sit up and help him, but it was hypnotic watching his hands work–slowly unbuttoning his shirt, taking off his cuff links, his belt…

Clothes hit the floor and when he was finally down to black boxer briefs, her eyes went a little wide.

She knew Dean had tattoos, but she’d never seen how many. The ones on his arms were visible whenever he wore a t-shirt, but the ones on his chest were completely new to her. Reaching out her hand to him, he joined her on the bed, lying beside her.

Without a word, she rolled toward him and placed her hand on his chest with a whispered, “Wow.”

He smiled but she could feel the rapid beat of his heart under her palm. “You like?”

“Um…yeah,” she said, laughing softly. “I had no idea you had these.” His right arm had a cluster of red roses and a cross with his mother’s name on it, and his left had a very intricate tribal design. On his chest, however, he had a massive lion’s head and the artwork–even in the dim lighting–was spectacular. She was tempted to ask him to turn on a light but figured there was time for that later. Right now, she was simply enjoying having the freedom to touch him.

After several moments, she looked up at him and gave him what she hoped was a sexy smile right before she pulled him in for another kiss. This one was slower, sweeter, but as soon as Dean rolled her onto her back and covered her body with his, it changed–grew more urgent–and pretty soon all Courtney could think of was how much she wanted him.

She began to move beneath him, rubbing against him, and just as she had thought earlier, she was all for him taking things slow later. Right now, however, she couldn’t wait. Hell, she’d been waiting for more than ten years to be like this with him and she was beyond impatient.

Her hands began to score down his back until she reached the waistband of his briefs and began pushing them away. His deep chuckle against her lips told her he got the message. But when he still made no move to help her, she broke the kiss.

“Lose the boxers,” she said breathlessly.

“Yes, ma’am.” And as soon as he was done, he surprised her by ridding her of her thong and of her breath when his mouth trailed a hot path from her breasts and downward. As soon as he settled in to please her, Courtney forgot about everything else and enjoyed the ride. 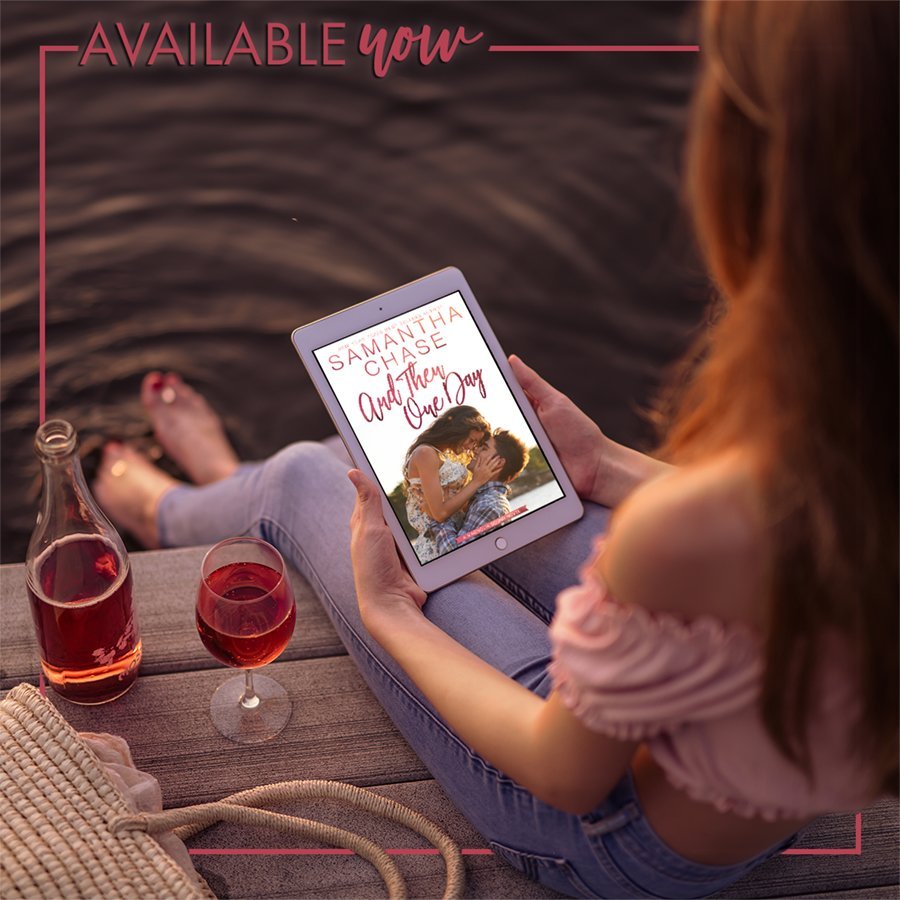 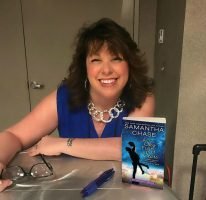 About the Author
Samantha Chase is a New York Times and USA Today bestseller of contemporary romance. She released her debut novel in 2011 and currently has more than forty titles under her belt! When she’s not working on a new story, she spends her time reading romances, playing way too many games of Scrabble or Solitaire on Facebook, wearing a tiara while playing with her sassy pug Maylene…oh, and spending time with her husband of 25 years and their two sons in North Carolina.