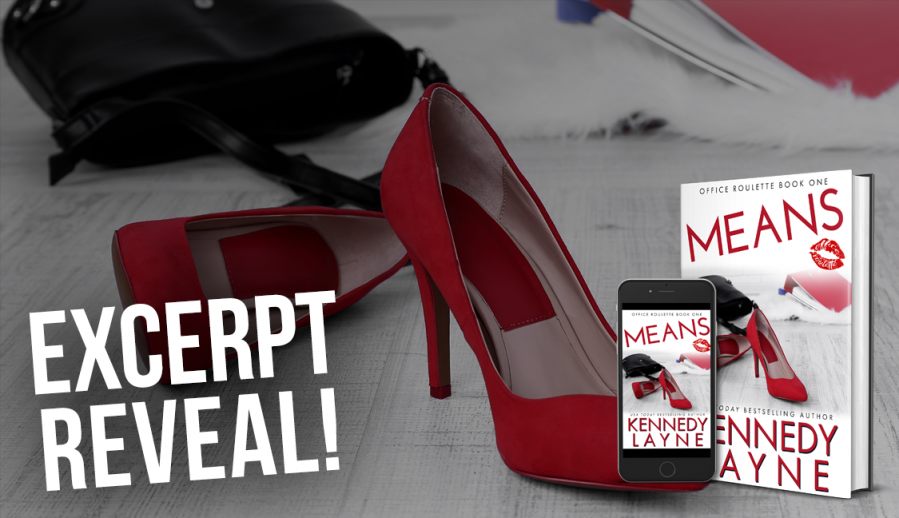 USA Today bestselling author, Kennedy Layne, is unveiling the first chapter from MEANS, the first book in her latest adult mystery/romantic suspense series, Office Roulette, releasing June 19, 2018. See below for information on the book and series, pre-order links, and the exclusive excerpt. 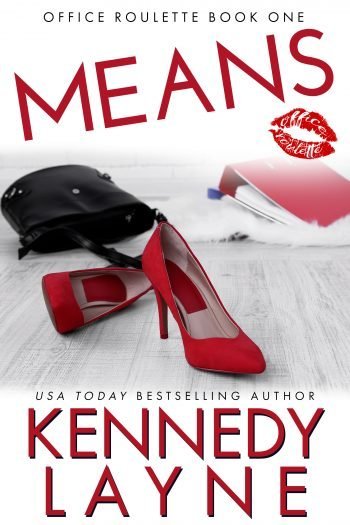 Synopsis
From USA Today Bestselling Author Kennedy Layne comes a sexy trilogy that involves greed, power, and the desire to do it all over again…

Smith Gallo has everything a man could ever want at the tip of his fingertips, except of course the woman he loves.  To what lengths will he be willing to go to make his ambitions come true?

Laurel Calanthe is one successful stock pick away from making partner when she finds herself in desperate need of an alibi.  There’s only one problem. The man who can save her from being arrested is her only competitor and the one who now holds her fate in his hands.

Greed is a powerful motivator in the game of making money, but desire can overcome even the strongest motive.

Chapter 1
“I couldn’t bring myself to end it.” Laurel Calanthe pulled open the pristine glass door that led to the offices of Manon Investments. The well-established hedge fund catered only to high net worth individuals and select business partnerships. The expensive décor was designed with those clients in mind.

In all honesty, even the air smelled of the same linen used in the manufacturing of U.S. currency. The heavy fragrance hanging in the air never failed to bring a smile to Laurel’s lips.

The fact that the door was unlocked meant someone was still burning the midnight oil, but that wasn’t unusual in their line of business. Brad Manon was fanatically selective in who he chose to add to the employment at his firm, most often ensuring the analysts understood loyalty and the importance of total commitment. Such marked dedication went the whole nine yards when it came to bonus time.

It was going on one o’clock in the morning on a Friday night, but that didn’t matter in the financial world. One of the world’s markets was always open, trading, and willing to take money from the fund’s capital holdings.

“You’ve worked too hard to give up your success for Smith Gallo,” Grace reprimanded, her voice of reason coming through loud and clear over the cell phone. Unfortunately, no advice she offered now could take back the fact that Laurel had just spent the last three glorious hours in Smith’s bed. “I’m not saying that you shouldn’t have a personal life, but does it have to be Smith? You’re both up for partnership. How’s it going to look if word gets out that the two of you are sleeping together?”

“That I’ve got tremendous taste?” Laurel asked halfheartedly, recognizing that she’d only put off the inevitable. It wasn’t good for her career to get involved with her competition nor was it wise to dip one’s quill in company ink. Oh, Smith had definitely dipped his quill in company ink. She’d even questioned if the partnership wasn’t why Smith had propositioned her to begin with, though their attraction had started long before either of them were up for promotion. Did he believe he could ruin her chances if Brad discovered their indiscretions? “I know, I know. I’ll tell him tomorrow that we should take things down a notch or two.”

Soft backlighting accentuated the empty reception area, though she didn’t pause on her way across the tiled entrance. She had one last destination in mind for the workday, and that was her private office where she’d left some files she’d planned to take home with her this weekend. Her black high heels clicked on the marble tile with each step she took until she reached the plush carpet of the private hallway.

“A notch or two?” Grace wasn’t being fooled in the least. “I was at today’s morning meeting, Laurel. The papers in your hand almost combusted from the way Smith was staring at you. Taking it down a notch isn’t going to cut it, not even close.”

“You only noticed that because you already know about the two of us.”

Laurel continued to walk down the hallway, noticing that a dim light was coming from Brad’s office. His private domain was located at the end of the corridor. The spacious corner office overlooked the beautiful city of Minneapolis, but he wasn’t the type to have an open-door policy. Quite the opposite. It hadn’t always been that way, but his demeanor had changed in the past few years… and not for the better.

It seemed it was in her favor to have stopped by for the files she needed, even at this time of the night when her boss was still here. Her presence in the office so late on a Friday would look good come next week when a final decision was to be made regarding the partnership slot.

Her chance at turning the fates was in the making.

“Look, Smith has a reputation for business and with women.” Grace muffled a yawn, reminding Laurel of the time. “Mixing the two together is just a recipe for disaster. I don’t want to see you get hurt.”

Laurel rested her tongue against the back of her teeth in an effort to counter that sentiment. Smith only allowed the world to see what he wanted them to see, and nothing more. He’d been born into one of the most prestigious families in the city, but he’d worked hard to make a name for himself based on I contribution to society. He was an enigma to most of the people he interacted with on a daily basis. He was nothing like his spoiled siblings who lived off their trust funds while traipsing around the world with the jet set crowd.

“I’m not going to get hurt,” Laurel argued, not truly believing her own contradiction. She had no idea where she stood with Smith, other than the sex was scorching hot. “Listen, I can’t talk about this now.”

She reached around the wall of her office and flipped on the overhead light. She hung the strap of her purse on the door handle before continuing down the corridor. Her heels sunk into the plush carpet as she got closer to Brad’s office door. It would ultimately benefit her if she dropped by and checked in, letting him see that she took her work seriously.

“Brad’s working late,” Laurel said, lowering her voice so that it didn’t carry through the empty hall. “I should say hello so that he knows I’ve been by.”

Laurel waited for Grace to acknowledge her bid at goodbye, not bothering to stop outside the doorway. She took a step into Brad’s office. The upcoming moment was mapped out in her head like a gambit in a game of chess.

She’d finish her phone conversation, not letting on that it was a personal call. He didn’t need to know that she wasn’t speaking with the London office. Such an appearance could only assist her in the meeting by the board in regard to the partnership, in which Brad’s opinion weighed heavily with the other partners.

Unfortunately, her night just went from bad to worse.

“… got an early breakfast with my mom,” Grace explained with disdain, not having the best relationship with her mother. Grace had no idea of the gravity of horror Laurel had just discovered. “Give me a call when—”

Laurel closed her eyes in disbelief, ignoring the hot sensation that practically singed her lashes. She hadn’t been sleeping well lately, and with the amount of overtime she’d been putting in at the office and additional hours she shouldn’t have spared in Smith’s bed, it was obvious she was having an acute panic attack.

The grisly sight before her didn’t change when she blinked her eyes multiple times. She tried to curtail her rapid breathing, afraid she would hyperventilate on one of the gasps in the back of her throat. She leaned back against the doorframe of her boss’ office and did her best to stop retching. She attempted to recover, seeking the support of her best friend, along with a dose of realism.

“Grace, I think he’s dead,” Laurel managed to say once again, her voice no louder than a whisper as she struggled to maintain what little composure she could muster. 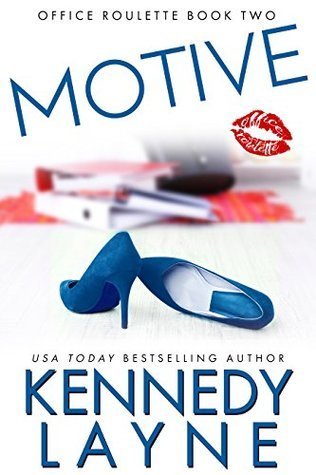 Rye Marshall had it all—wealth, prominence, and the love of his life.  But nothing lasts forever, and his perfect world came crashing down around him.  When the dust settled, he found himself alone and starting from a clean slate.

Grace Dorrance had made many mistakes in her life, but one stood out above the rest—an epic ending to a complex and passionate relationship.  She left her former lover’s life in complete ruins and tried her best never to look back at the wreckage.

Seconds chances are hard to come by, but even more difficult when Grace is arrested for a murder she didn’t commit.  This gives Rye the perfect motive to forgive and forget, allowing for new beginnings. Unfortunately, someone’s playing a game of office roulette with everyone’s lives. 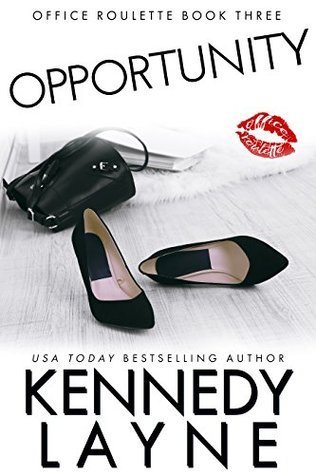 Gareth Nicollet had been born into wealth, but he’d learned at an early age that money wasn’t everything it was cracked up to be.  Regrettably, he’d made a meaningful choice early on in his life that now threatened his future with the woman he loved.

Cynthia Ellsworth valued many things, but trust and loyalty were at the top of her list.  She’d always known the man who shared her bed had secrets, but she never thought in a million years that he had the ability to destroy her career and her heart with a single blow.

Someone once said that greed was balanced by fear, but that wasn’t entirely true when there was nothing left to lose.  Unfortunately, Gareth’s secret is the very reason the roulette wheel is spinning and Cynthia’s life hangs in the balance. 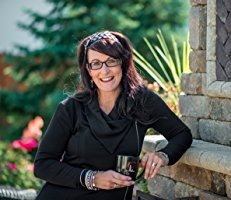