Welcome to the blog tour for THE CURSED KEY, the first book in the new adult urban fantasy romance series, The Cursed Key Trilogy, by Miranda Brock and Rebecca Hamilton. See below for information on the book, buy links, an exclusive excerpt, and details on their giveaway. 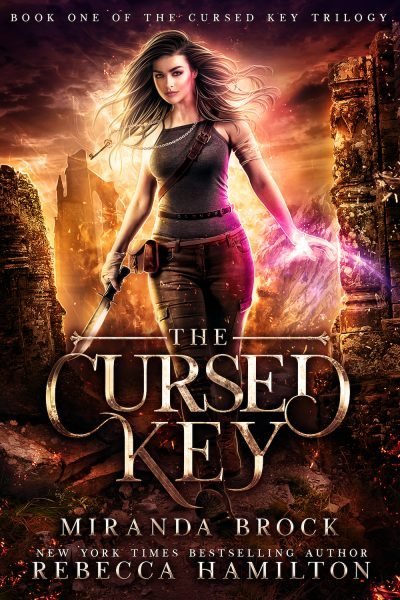 Synopsis
A forgotten past, a dark mage, and an unyielding curse.

Another team beat free-spirited archaeologist Olivia Perez to the dig of a lifetime, and now she’s left with the choice to wait for scraps or brave a dangerous, dusty tomb in hopes of finding other priceless artifacts. Her reward? A mysterious key she has no idea is cursed. Soon, Olivia realizes she’s brought home more than just an ancient rarity.

Malevolent visions begin to plague her. Unnerved by what they reveal, she casts away the key…unknowingly placing it into the waiting hands of a dark mage bent on destruction. Only when a shifter agent from the Paranormal Intelligence and Tracking Organization arrives searching for the key does Olivia realize what a huge mistake she’s made.

Forced to team up with the ill-tempered shifter, her journey to reclaim the cursed key leads down a twisting path of dark histories, dangerous magic, and deadly obstacles. But Olivia’s efforts to take back the ancient relic before the dark mage can destroy the lives of humans, shifters, witches, and fae alike are thwarted by her own dark past…and a price steeper than what she’s willing to pay.

Excerpt #3
Through the trees, the angles of my house came into view. If I could just get to my car…

A gasp filled my lungs as an arm reached out. The man’s hand gripped me, strong and relentless, and jerked me around. He shoved me against a wide tree, the bark digging into my back. His hand pressed against my collarbone, holding me firm against the trunk. His dark brows were low. Slowly, his face tilted down, and when he glanced back up, his eyes were wider.

Held fast in my right hand was my knife, and I had the point threatening slice a hole right through his dark blue T-shirt and up under his sternum.

“Get your hand off me.” I spat the words through clenched teeth. The man froze for a second before still stepping closer to me. I opened my mouth to protest, and he held a finger to his lips.

“Shhh.” It was then I heard the voices. The rhythm of a pair of feet hitting the trail reached me. A couple of people were jogging not too far away. “Don’t scream.”

I lifted my gaze. His face was so close, I saw the few days’ worth of stubble peppering his jaw. He smelled like sweat with an peculiar undercurrent of citrus and petrichor. His body was practically flush with mine. It irritated me. I put pressure on the knife and scowled. “You don’t scream,” I muttered.

His cheek jumped, though whether it was an angry tick or a barely contained smile, I couldn’t tell.

The couple paused, and the two of us froze behind the tree as they remarked on the marred trail. I pulled in deep breaths as me and the man who refused to give up waited in silence. Finally, the footsteps continued and faded through the forest.

I pushed against the man’s firm hand. “Back off.” I punctuated my demand with another slight upward jab of my knife.

“You’ll want to be careful with that knife,” the man said.

“I think you are the one who needs to be careful.” I didn’t break my hard gaze from his peculiar golden eyes. As I stared at him, I couldn’t help but have a strange sense that I’d seen him before. I worked to try to place him, but was coming up blank.

Slowly, he eased up on me. Just slightly. “Give me the key.” 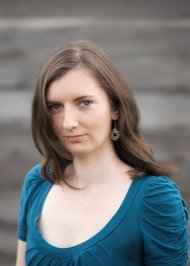 About the Author
From an early age Miranda Brock has always loved fantasy and adventure everything. Since she doesn’t live in a world of enchanting powers, mythical beasts, and things unbelievable she has decided to write about them. (Although, if you happen to see a dragon flying around, do tell her.) Born in southern Illinois, where she still resides with her husband and two children, she grew up running through the woods, playing in creeks, and riding horses. What started out as writing poetry grew into short stories and eventually led to her first novel, Souls Discovered. Miranda lives in the country where she finds inspiration in the simplicity and beauty around her. With the help of a ridiculous amount of coffee and some good music she writes whenever she gets a chance. 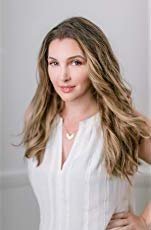 Represented by Rossano Trentin of TZLA, Rebecca has been published internationally, in three languages: English, German, and Hungarian.