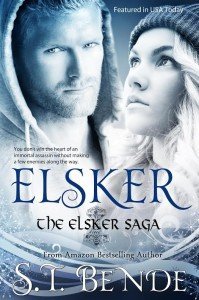 Synopsis
You don’t win the heart of an immortal assassin without making a few enemies along the way. Kristia Tostenson prefers Earl Grey to Grey Goose and book clubs to nightclubs, but when she transfers from her one-stoplight town to Cardiff University in Wales she falls in love with Ull Myhr. Her new boyfriend isn’t exactly what she was expecting. He’s an honest to goodness Norse God – an immortal assassin fated to die at Ragnarok, the battle destined to destroy Asgard and Earth. Kristia’s crazy visions are the only thing that can save their realms.

My Review
As an avid fan of the Marvel movies, including both Thors and the Avengers, I love that this story is includes a great deal about Norse mythology. It’s a fresh take on the paranormal genre. When Kristia decides to spend her sophomore year of college abroad, she settles on Cardiff University in Wales where she falls for the hottest guy in school, and quite possibly the planet. He has an unusual name, Ull Myhr. And as it turns out, he is Thor’s stepson and his destiny is not pretty. But, you can’t help who you fall in love with and Kristia has some tough decisions to make.

Plot
Considering the whole God/Asgard/Ragnarok thing, the story has surprisingly little action. It’s more a love story than an action/adventure, but the love story is sweet. There’s a generous helping of heat, particularly for a story that is completely devoid of sex, which just further proves that new adult fiction doesn’t need sex to be steamy. But even without adventure or sex, the plot moves at a good pace.

There are a couple of plot points that felt rushed. For instance, Kristia seems to accept Ull’s true identity pretty easily. She says she doesn’t, but not enough attention is paid to her coming to terms with the reality and fate of the guy she loves. The other is how quickly she seems to fall in love with him. I’m not opposed to stories of love at first sight, but this doesn’t feel like that either. Rather she falls in instant attraction with him, but she seems to go from being intoxicated with him, to making her entire world about him without any additional development. It doesn’t make the story implausible, but I think it would have been more enjoyable to watch it unfold at a slower pace.

Characters
The characters are interesting enough. Ull especially seems well fleshed out. I love the way he talks without using any contractions. He sounds exactly like you would expect the stepson of Thor to speak. The two flatmates Kristia meets in Wales are delightfully British and Ull’s Asgardian friends are equally fun. Kristia is the only character I’m unsure of at this point. She doesn’t come across as especially deep or developed. Since the story is from her point of view, I wanted more from her. I wanted to see the deep wound she must overcome. Sure, her parents checked out a long time ago and she was raised by her grandmother, but it doesn’t seem to really impact her that much. She doesn’t seem damaged as a result. But it does play in nicely with the bigger plot point of the impending implosion of the universe.

Bottom Line
Elsker tells an interesting tale, but feels almost like it’s a prequel to whatever happens in the Elsker Saga #2. The romance is well done and important to the overarching plot. But I do feel like it’s lack action. That said, I will definitely be reading the next book in the saga. I believe that’s when this story is really going to take off. 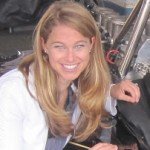 Before finding domestic bliss in suburbia, ST Bende lived in Manhattan Beach (became overly fond of Peet’s Coffee) and Europe… where she became overly fond of the musical Cats. Her love of Scandinavian culture and a very patient Norwegian teacher inspired the ELSKER series. She hopes her characters make you smile and that one day pastries will be considered a health food.You can follow ST Bende on Twitter @stbende, or send an e-mail to stbende@gmail.com.

The Giveaway
a Rafflecopter giveaway