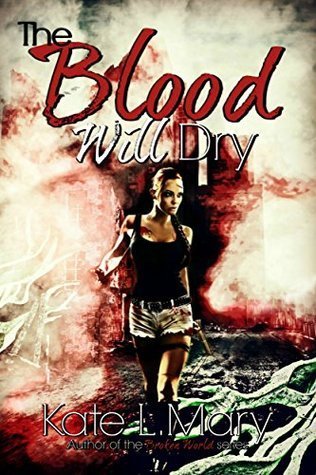 THE BLOOD WILL DRY by Kate L. Mary

Synopsis
Five years after an alien invasion, the earth is unrecognizable. The human race has been decimated and the sun completely blotted out by dark clouds that bring constant rain. All indigenous plant life has been killed off and replaced by vegetation that has proven to be as deadly as it is invasive, and the aliens that have taken over the planet are seemingly invincible.

Living in a crowded building with other survivors, Diana Foster wants nothing more than to forget what she lost the day the aliens arrived. But an incoming platoon brings a familiar face, one that not only opens old wounds, but also forces her to deal with the painful memories she’s worked hard to forget. Bryan may not be the same cocky kid he was before the invasion, but his sudden appearance still turns Diana’s world upside down in ways she never expected. When he showed up she knew it would mean finally facing her past, but she never thought she’d find a future that was actually worth living.

After years of struggling to find a weakness in the aliens’ defenses, Diana stumbles upon a solution just as a new and more deadly threat surfaces. Faced with an attraction she never expected and a battle that most believe can’t be won, Diana must work through her painful past as the survivors mount a battle that may determine the fate of mankind. If her plan fails it very well could be the end of humanity, but if works it will mean having a real future, and a chance to allow the blood to dry once and for all.

My Review
I’m a huge fan of Kate L. Mary’s Moonchild series, but this one didn’t quite live up to my expectations. THE BLOOD WILL DRY is set in a near-future dystopian America after an alien invasion. Think the TNT series Falling Skies. The premise is fantastic with the survivors attempting to live beside the aliens they refer to as bugs. At least until something changes after nearly five years of peaceful co-existence. A ragtag group sets out on a suicide mission to reclaim their planet. At the heart of the story is Diana, who lost everything she loved on the day of the attack. Along with her friends, they discover the bugs’ weaknesses and attempt to use those against them.

Plot
The plot is primarily the story of Diana and taking down the aliens, but there is a strong romantic subplot involving the younger brother of her dead husband. The romance didn’t work for me, since it was nearly a love at first sight kind of thing. There was no build-up, no “will they or won’t they”, the kind of romance I’ve come to expect from Kate L. Mary. The alien plot, on the other hand, is a gripping, intense, rollercoaster ride of action and suspense. While there are no jaw-dropping twists or unexpected turns, the story is well plotted and entertaining.

Characters
The characters are where the book falls short for me. I loved the depth and development of all of her characters in the Moonchild series, so maybe I expected too much here. I found Diana to be exceedingly annoying, to the point that I had a hard time caring what happened to her. The romance between Diana and David was too fast and almost forced. Diana experienced very little growth, unless going from annoying to super annoying is considered growth. However, Diana’s best friend, Daisy, was a breath of fresh air and I think this story could have been a solid 4 stars for me if she’d been the protagonist.

World Building
The world building is where the author shines in everything I’ve ever read of hers and THE BLOOD WILL DRY is no exception. The dark, post-apocalyptic world she creates is both depressingly awful and realistically hopeful. Her alien antagonists are well constructed and suitably evil.

What I Enjoyed About THE BLOOD WILL DRY
1. The setting. Having been born in Dayton, Ohio, I absolutely loved reading about so many of the local landmarks and neighborhoods of my childhood. I haven’t been back in more years than I care to think about, but even covered in all those vines, I can still vividly picture many of the locations mentioned.

2. Daisy. Her bubbling optimism was a contrast to Diana’s eternal pessimism. More than that, she’s vulnerable, honest, and has a great arc.

3. The plot. The author does a great job of creating a well-plotted scifi adventure.

4. Aliens. Okay, I didn’t LIKE the aliens, but I enjoyed the horrors the author showed us of their world, bringing an even darker element to an already bleak tale.

5. The strategy. Without giving anything away, I love the strategy the team comes up with to fight back against the aliens and the fact that it’s been right there in front of them the whole time.

Bottom Line
A good scifi/dystopian/post-apocalyptic tale, but with a protagonist I had trouble connecting with or rooting for.

About the Author
Award-winning author of WHEN WE WERE HUMAN and the Amazon best-selling BROKEN WORLD series, Kate L. Mary writes everything from post-apocalyptic tales of the undead to new adult contemporary romance. A mother of four and an Air Force wife, her days are divided between keeping her household in order and creating new worlds for readers to get lost in.