Today is release day for ALL THAT’S BEEN SAID, the second book in the young adult contemporary, The Carlington Twins Duet, by Emma Doherty. See below for information on the book, buy links, an exclusive excerpt, and details on her giveaway. 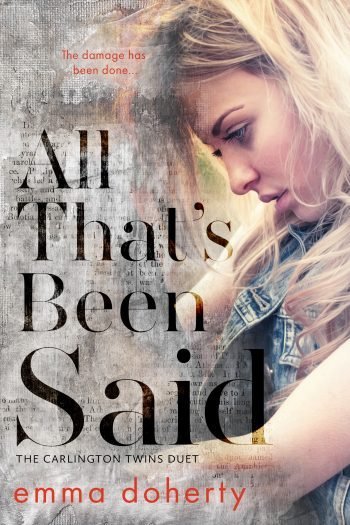 Synopsis
Izzy Kavanagh’s life falls apart when her mother dies. She is forced to move to the US and live with her absent father, who thinks money is the answer to every problem, and her twin brother Ethan, who she has barely spoken to in years.

She hates everything about the move. She hates that she’s forced to finish high school even though she’s already completed it in the UK. She hates that her father is controlling her and threatening to take away her inheritance if she doesn’t do as he says, even though he’s barely there and couldn’t care less about her. She hates that everybody already has an opinion on her based on her family name.

But what she hates above all else is having to see her brother every day in his perfect life where everybody worships him, because he chose this life over her and her mum.

And for that, she’ll never forgive him.

I look up from my locker and see Benson Montgomery there.

“Hi?” I reply, looking at the guy who randomly asked me out on a date when I’d just moved here. I don’t really have an opinion on Benson either way. He just sort of swans around the school with his preppy crew, looking down on anyone who doesn’t drive a car that costs over twenty thousand dollars and looking around to see who notices him. On principal, I should despise him, but I don’t care enough to do that. If you ask me, he cares too much about how other people perceive him and this image he’s trying to portray in order for me to dislike him too much. Anyone who cares so deeply about what others think about them is seriously lacking in self-confidence.

“I was wondering if you’re planning on attending the Rosemary Gala this weekend?”

Rosemary Gala? Why does this ring a bell?

He must read my blank expression. “Your grandmother organised it? It’s to raise money for the children’s hospital.”

He looks surprised. “No you’re not going?”

“But my mother assured me you were. She spoke to your grandmother last week.”

That would explain all the emails and messages I’ve been getting from her. I haven’t even bothered to read them. “Well my grandmother is delusional if she thinks I’m going to voluntarily spend time with her.”

His jaw falls open. Clearly he wasn’t expecting that. “Well that’s a shame…I was going to offer to escort you as your date…” He lets the sentence linger as though his offer might change my mind.

He looks insulted. “You know, Izzy, I’m actually willing to overlook your recent transgressions and take you on a date.”

What the hell? “My recent transgressions?”

“Yes,” he says irritably. “That business with Craig McGarretty—I don’t know how someone like you would even consider going there. And honestly? It sounds like you’re rather lacking in friendships of any kind at the moment, so I would seriously reconsider my offer if I were you.”

What an absolute dick.

“You know what, Benson?” He straightens up and steps slightly closer to me. I think the stupid idiot actually thinks I’m going to agree with him. “Even if every single person on the face of this earth stopped talking to me, I still wouldn’t be caught dead on a date with you. Now leave. Me. Alone.”

He blinks in total astonishment, but I don’t wait to see if he has anything else to say to me because I see Paul in the distance. I slam my locker and hurry to catch up with him.

“Hey,” he says as I fall into step at his side.

“Do you know Benson Montgomery?” I ask.

He grins back at me, and we exit through the main hallway and walk down the stairs before heading to the junior parking lot.

“How was your day?” Paul asks.

“Eventful,” I tell him, and he smiles broadly back at me. Something tells me he already knows what went down between me and Evie, and I’m guessing he’ll be pretty pleased about it. He’s incredibly loyal, and Rachel is one of his friends. He won’t like what Evie did.

I open the passenger door to Paul’s car and swing my bag in.

I look over at Paul, and he’s looking at something in the distance. I turn my head to see what it is and immediately want to scream.

What the hell? Apparently today is about to get even more eventful.

“What are they doing here?”

Craig McGarretty is parked up across the street from the student parking lots, not on school property (he’s made sure of that) but wearing his letterman jacket, as are all the buddies he brought along with him.

My head turns back towards the school just as Ethan, Finn, and several of their teammates stroll out of the main entrance. They’re laughing at something and standing around chatting. They haven’t noticed them yet. 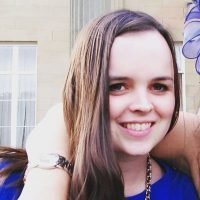 About the Author
Emma Doherty was born in Yorkshire, England. She attended university in Newcastle before moving to London. She loves to travel, write, spend time with friends and family and hear from her readers.