Release Day + Giveaway – ABOUT LAST SUMMER by Patricia B. Tighe

Today is release day for ABOUT LAST SUMMER, a stand-alone young adult contemporary romance, by Patricia B. tighe. See below for information on the book, buy links, an exclusive excerpt, and details on her giveaway. 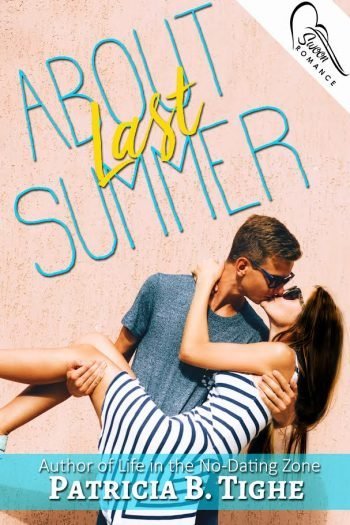 ABOUT LAST SUMMER by Patricia B. Tighe

Synopsis
Pretend to be from Spain? Act like she can barely speak English? Sure, why not? It wouldn’t be the first time Gabby Vega had agreed to a challenge from her best friend, Kenzie. Besides, it’s only for a week of vacation with Kenzie’s cousins. Gabby will prove to Kenzie she can keep up the fake identity for the whole trip—that she’s not a quitter.

There’s just one major surprise. Noah Jernigan is also staying with Kenzie’s cousins. Noah, the boy she fell in love with at drama camp last summer and the boy she had to dump when it was over. The boy who knows who she really is.

Noah can’t believe it when Gabby appears at the Bryson’s vacation home in the New Mexico mountains. He hasn’t seen her in a year. It practically took that long just to get over her. And now she’s Gabriela from Spain? All he wants is to get as far away as he can. Or maybe the exact opposite. Stick as close to her as possible and find out what the heck happened last summer. And definitely get some payback.

Now Gabby has to keep Noah at arm’s length as she pretends to be Gabriela. She doesn’t want to answer his questions or rehash last summer. Because one thing is clear—the more time she spends with Noah, the more she’s in danger of falling for him all over again...

Excerpt 1 – Gabby
We entered a bright corner room with windows on two sides and twin beds. It was pretty, but I couldn’t really take it all in.

“Sit down,” Kenzie said, taking the backpack from my shoulder. “What’s the matter? You look like you’ve lost your best friend, and I’m still right here, so talk.”

I sat on one of the beds and slid my hands under my thighs. “Remember last fall when I was getting over the guy from drama camp?”

“But, how could—? I mean, I thought he lived far away from Austin, like San Diego or something.”

Kenzie was shaking her head. “And he goes to Geoff’s school. What are the odds?”

“No, you have to stay. That would be quitting. You wanted a challenge, didn’t you?”

“This is more than a challenge. I have no idea what he’s going to do. He knows me, Kenz. He can tell everyone who I am.”

She plopped onto the opposite bed. “But you don’t know that for sure. I mean, he went along with it outside, didn’t he?”

“Yeah, but it was so sudden. After he thinks about it, he’ll probably want to stand on the table and announce it to everybody.”

Kenzie laughed. “Still. He didn’t give you away, and he could’ve.” She got up and walked to the window. After staring out for a second, she turned back. “I say wait it out. See what he’s going to do. He might be really cool about it.”

I rubbed my forehead. “Would you? If someone dumped you and a year later you saw them pretending to be somebody else … would you be nice about it?”

About the Author
The mother of two grown sons, Patricia B. Tighe lives in West Texas with her husband and two dogs. Her love of the written word caused her to get a journalism degree from Texas A&M University in 1980 and an MA in Writing Popular Fiction from Seton Hill University in 2008. When not writing or reading, she can be found walking the dogs or yelling at the TV during an NFL game. She’s also a fan of British TV shows. Downton Abbey, anyone?
.