Today is release day for IT’S A GHOST’S LIFE, the fifth book in the adult cozy mystery series, Murder by Design, by New York Times and USA Today bestselling author, Erin McCarthy. See below for information on the book, buy links, and an exclusive excerpt. 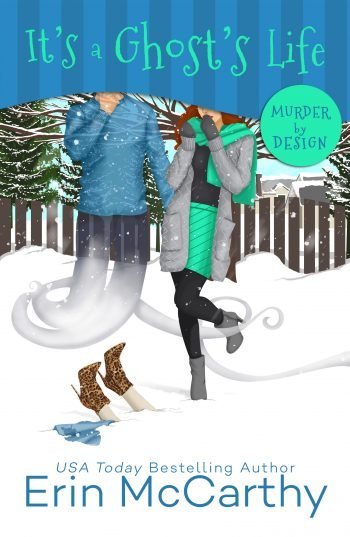 Synopsis
When the bitterly cold days of January descend on Cleveland, Bailey Burke finds her “Put It Where?” home staging business is as frozen as her toes. The only bright spot is the return of her friend Ryan after his, ahem, eviction from heaven. Especially since no other dead people seem to be harassing her in recent weeks.

Yet when her grandmother’s bingo buddy turns up frozen solid in a stranger’s back yard, Bailey is the only one who finds the death suspicious. Bailey knows fashion and she knows Vera, a one-time film star, would not be caught dead, literally, in a stained nightgown and cheetah-print boots. Determined it prove it is homicide and not dementia, she enlists Ryan’s help to investigate, despite his ghostly limitations.

This time Bailey is ready to play it smart, solve the crime, have the bad guy do the time… only all is fair game when it comes to eccentric backstabbing biddies at bingo.

A full-length novel in the hilarious Murder By Design series… 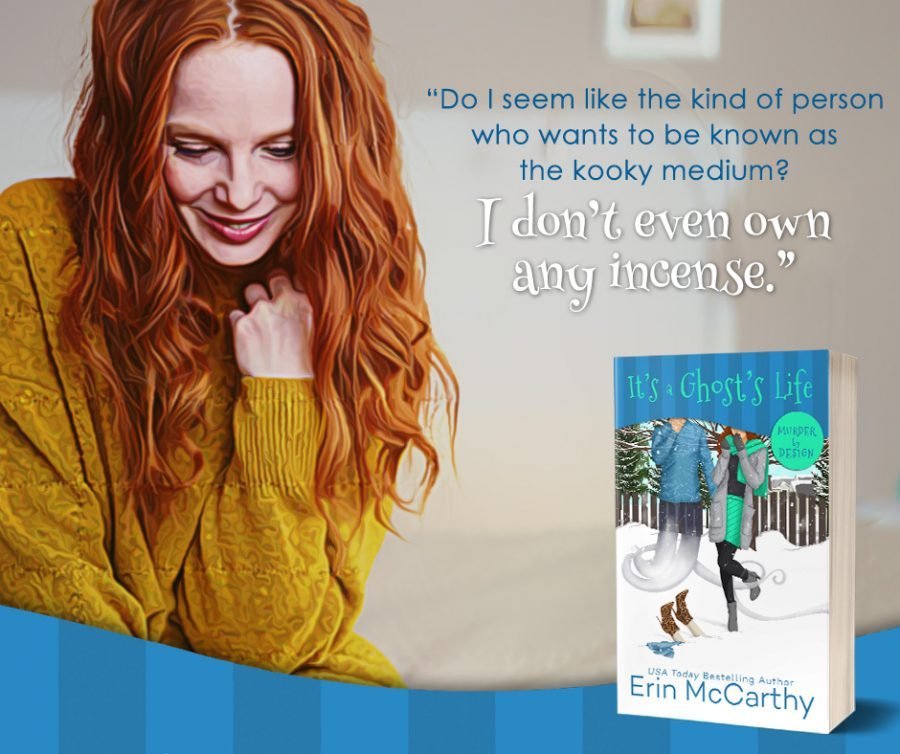 Excerpt
Vera used her phone way more than Grandma Burke. She had social media accounts where she followed fashion and Old Hollywood accounts. She had TMZ. Rent the Runway. Images of sexy men reading books. She had a reading app with hundreds of books on it, from classics to romance novels to modern literature like The Kite Runner.

Her texts were from her friends and her niece, Eva. A man I assumed was her nephew. A couple of guys who were clearly flirting with her. I scrolled through the thread with the man named “Colin” and let out a startled yelp. Right there in their conversation going back and forth, was a dick pic. “Dang, Vera.” I quickly scrolled past it, then out of pure curiosity went back because it didn’t look like a selfie from a ninety-year-old man.

They say that men don’t age there the way they do elsewhere but even so… the thighs appeared to be a man in his prime. I suddenly felt like a naughty schoolgirl. Vera might be a cougar, and that was all well and good, but I had a boyfriend.

“Moving on, Bailey.” I closed that thread a heartbeat after I should have, and felt guilty as all get-out for that.

Then I found a thread with a man named Stanley.

It appeared he had come into town and had made plans to see her Friday night.

So lovely to see you again, she’d written at midnight on Friday.

Interesting. I wonder if he had any clue she had passed away?

I needed to call him and ask some questions but I needed to work up the courage to do that.

Dashing back downstairs I snagged a crystal flute from her dining room hutch, and using a towel from the kitchen, opened the champagne. I took the bottle and the glass upstairs and poured in Vera’s bedroom.

“To you, Vera,” I said, glancing around her inner sanctuary. “You were a cool chick who lived life to the fullest. May you rest in peace, dahlin’.”

I half-expected her to answer me. Maybe I was hoping she would. But the room remained silent. Vera had a record player on an etagere in the corner and I opened it to see what record was on it. Glenn Miller. I turned it on, not wanting to snoop in silence.

Sipping champagne, I went through Vera’s closet, drooling over the vintage pieces nestled up against the modern designers. Nothing was cheap. There were classic, timeless pieces, then funky and fun accessories. She had mastered the art of dressing in well-made basics, then adding shoes, jewelry, a turban, or a funky shawl to change up her look.

Her shoes were to die for.

I gave a laugh of horror in the closet at that thought. To die for. Yikes.

There were drawers lined with felt that had a drool-worthy collection of brooches, bracelets, rings, and necklaces. She even had hairpins that I suspected were from the 1930s. I did notice what looked like some odd empty spots in a few drawers and I wondered how closely Pam had inspected the collection. Or if Pam had swiped a few items on her way out.

There were four stacks of hat boxes, which was glorious.

Beside them were photo boxes. Inside I found newspaper clippings from seventy-five years earlier.

Miss Vera Rosenbaum, 21, model with the House of Chanel, is engaged to legendary film star, Frank Torro, 37. Nuptials to be held at the private home of Humphrey Bogart in a simple ceremony, in accordance with wartime sacrifice.

There was an engagement photo where Vera looked way older than she actually was at the time. Dressed in a suit with shoulder pads, she looked glamourous as hell. Her lips were dark, eyebrows dramatic, hair perfectly curled. Her fiancé was what I would call dapper but not particularly handsome. He was glancing affectionately down at her. On the other hand, she was staring boldly into the camera, sensual and full of life.

“Age is a funny thing, Vera, isn’t it?” I said out loud in the closet, draining my glass.

The box was full of old photos. Wedding photos of Vera at different ages. Photo shoots. A three-legged race on the lawn of a mansion, palm trees in the background. Runners laughing as they held on to each other.

Man, I was having a melancholy day.

There were love letters in the box too. Passionate notes from Vera’s third husband, things like “Even on the darkest day, you are the sun that warms my soul.”

I would fall over if Marner wrote me a note.

There was also a nasty note from a woman that Vera had kept, which I found fascinating.

It was a woman named June calling Vera a homewrecking whore.

“Why would you save this?” I murmured.

And was June still alive? Had she gotten her final revenge on Vera? That seemed unlikely. She was probably ninety herself.

The record playing cut off suddenly.

I jumped, dropping the letter from angry June.

It didn’t sound like the record had ended on its own. It had cut off mid-song.

Could Vera do that?

Then I realized I heard footsteps.

Crawling on my belly, I reached the closet door and tried to ease it closed so as not to alert the intruder.

It was too late. I was on my stomach, staring at Italian loafers. 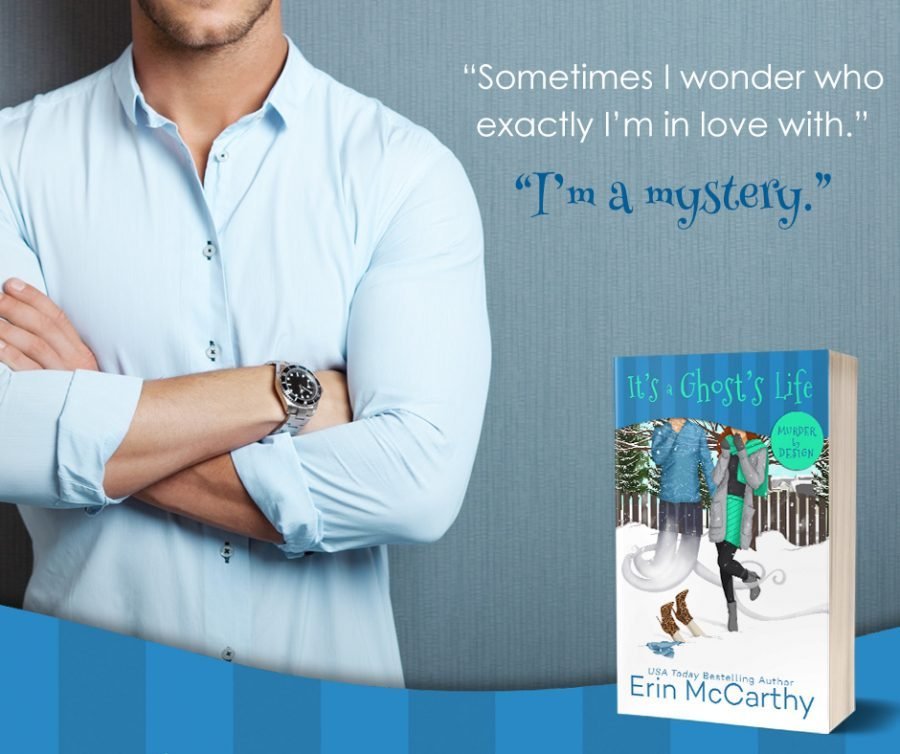 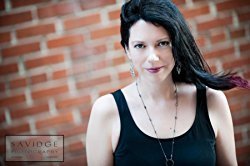 About the Author
USA Today and New York Times Bestselling author Erin McCarthy first published in 2002 and has since written over sixty novels and novellas in teen fiction, new adult romance, paranormal, and contemporary romance. Erin is a RITA finalist and an ALA Reluctant Young Reader award recipient, and is both traditionally and indie published.

When she’s not writing she can be found sipping martinis in high heels or eating ice cream in fleece pajamas depending on the day, and herding her animals, kids, and amazing renovation-addicted husband.