Release Day – THE INVASION (The Union Series) by T.H. Hernandez

Today is release day for THE INVASION, the fourth book in the young adult dystopian romance series, The Union. See below for information on the book, buy links for the series, an exclusive except, and a new teaser. You can currently pick up THE UNION, book 1 in the series, for just $0.99! 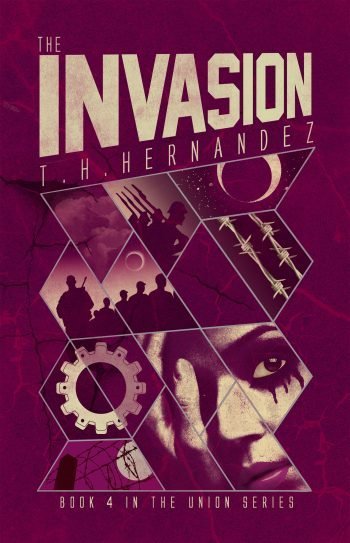 THE INVASION (The Union #4) by T.H. Hernandez

Synopsis
They failed. Evan and Cyrus risked everything to keep the Uprising from attacking the unarmed Union, but something went terribly wrong. Evan’s home has been invaded by soldiers who are killing government officials and occupying the homes of her fellow citizens.

Captured by the Uprising, Evan fights for her life and her sanity, desperate to escape so she can find Cyrus and her family.

Reeling from an unexpected discovery, Cyrus is adrift until he uses his Uprising training to find a way to fight back against the invading force the only way he knows how.

With the help of old friends and new, they will do whatever it takes to protect each other and those they love, even if it means sacrificing being together, their way of life, and even their very lives.

Liquid fills my nose and mouth and I claw in front of me, searching for the surface. I gasp, choking on a combination of air and water and shove my drenched hair out of my face. Hercules One holds an empty bucket at his side, water still dripping from the rim.

Dizziness takes hold when I sit up, my body tilting. H-1 grabs my biceps, yanking me to my feet mere moments before my head would have conked on the concrete. Guess he wants the honor of doing the head conking himself.

Something about my face doesn’t feel right. My fingers run over the planes of my face, hitting a tender spot on my cheek. Pain shoots through my jaw and into my head while stars dance across my vision until everything disappears.

Another blast of water hits my face and my eyes fly open to a pair of cold blue ones staring back at me. “Where did you train?” Draya asks.

My lips part to tell her off, but the words catch on their way out.

Hercules Two approaches me, and without warning his fist is in my stomach. A yell tears from my raw throat and I double over, screaming through my teeth.

“In the Northwest,” I gasp.

“Where in the Northwest? Which camp?”

The pain begins to ebb, allowing me to control my mouth. If I tell them what they want, they’ll have no reason to keep me alive. I’m just not sure how much I can tolerate before I verbally vomit the truth along with the threatening bile. H-2 strikes the left side of my face with the back of his hand, sending blinding pain racing from my head into my spine.

“Northwest Seven,” I scream. Shit, at this rate, I’ll tell them everything and be dead within an hour.

Draya’s eyes dim rather than brighten with the information. “Now we’re getting somewhere. Who was with you?”

“Other recruits. There was a whole truckload of us, plus all the kids already there.”

She narrows her gaze before turning on her heel and leaving the room, returning a few moments later with a tablet. “Several soldiers left that camp unauthorized, including the commander. Who was your commander, and where is he now?”

What the hell? First, I’m not telling her anything about Cyrus, even if she tortures me, but second… “Don’t you know who the commander was?”

Her only response is an unblinking stare.

The open-palmed slap doesn’t hurt any less as it rocks my head to the side. The stakes are too high now, and I manage to keep my mouth shut. “Answer the commander,” H-2 snarls.

I bite my lips together and prepare for the next blow, another backhand across my face. In an instant, the face of the first girl I shot to save Marcus’s life flashes before me. I close my eyes and do my best to stand a little straighter and take the next strike as penance for her. The fist in the gut is for the boy I killed, and I crumple to the floor. The boot to my ribs is for the kids blown up when the explosives went off. I hear the first crack, more than feel it. What they’re doing to me pales in comparison to what I did. I can take this, I deserve it. But I can’t prevent the small whimpers from escaping with each kick until the merciful darkness comes to take me again. 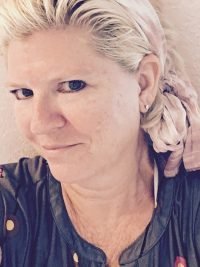 About the Author
T.H. Hernandez is the author of young adult books. The Union, a futuristic dystopian adventure, was a finalist in the 2015 San Diego book awards in the Young Adult Fiction category.

If she’s not writing, you can usually find her reading, finishing more than 200 books over the past two years. She loves pumpkin spice lattes, Comic-Con, Star Wars, Doctor Who marathons, Bad Lip Reading videos, and all things young adult, especially the three young adults who share her home.

When not visiting the imaginary worlds inside her head, T.H. Hernandez lives in usually sunny San Diego, California with her husband and three children, a couple of cats and a dog who thinks he’s a cat, often referred to as “the puppycat.”