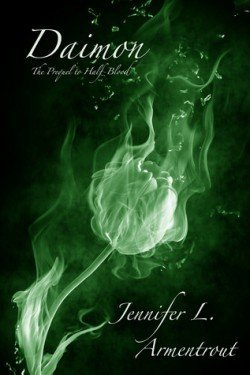 Synopsis
“Love in my world usually ended up with someone hearing ‘I smite thee!’ as she was cursed to be some lame flower for the rest of her life.”

For three years, Alexandria has lived among mortals–pretending to be like them and trying to forget the duty she’d been trained to fulfill as a child of a mortal and a demigod. At seventeen, she’s pretty much accepted that she’s a freak by mortal standards… and that she’ll never be prepared for that duty.

According to her mother, that’s a good thing.

But as every descendant of the gods knows, Fate has a way of rearing her ugly head. A horrifying attack forces Alex to flee Miami and try to find her way back to the very place her mother had warned her she should never return-the Covenant. Every step that brings her closer to safety is one more step toward death… because she’s being hunted by the very creatures she’d once trained to kill.

The daimons have found her.

My Review
This prequel to the Covenant series by Jennifer L. Armentrout, introduces us to headstrong Alex, swoony Aiden, Alex’s mom, and the world of Greek Mythology that these characters inhabit. In flashbacks, we see a young Alex stand up to her elders and her mom abandoning their world to protect her daughter. As a half blood (half demigod, half human) Alex is stronger than mere mortals, and that strength and her strong will, keep getting her into trouble in the mortal world.

They live a life on the run, never staying in one place too long. Until the daimons, evil creatures driven to drink the blood of demigods,  find them, then all bets are off.

This short prequel does a really good job of establishing the world and Alex’s character, but it fell short of really engaging me. If I wasn’t already a devoted JLA fan, I’m not sure I would have bothered reading the first book in the series. It isn’t necessary to read this prequel to enjoy the series, but after you’ve read the first book, it might be good to go back and read the prequel to help understand how things got to be the way they are. In fact, I think if you read in that order, Book 1, Prequel, Book 2, then Daimon is actually a pretty good story.

Plot
The plot is somewhat lacking since the purpose of the prequel is to set up the series, which is why this isn’t necessarily a compelling read. Even so, there were some surprises that set everything in motion for book 1, Half-Blood.

World Building
This is where Daimon really shines. Introducing us to modern-day Greek Gods, their hidden world, and the mortal world they sometimes interact with, sets the stage for the series really well.

Characters
We mostly get a look at Alex and her character, as well as the evil of the daimons. It’s obvious from the first chapter that Alex is complex, unconventional, and completely unpredictable. We also get to see how much Alex’s mom loves her and what she was willing to sacrifice for her daughter.

Bottom Line
As a prequel, it’s not really necessary and not all that compelling. But if you read Half-Blood first, it fills in some blanks.