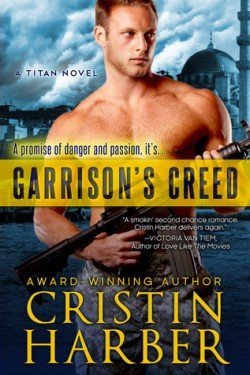 Synopsis
A SPY RUNNING FOR HER LIFE
Nicola is an injured CIA agent on the run from a failed undercover operation. Her escape plan shatters when she slams into the man who buried her a decade ago. Cash Garrison. Her first and only love. Now, sexier than her best memory and cradling a sniper’s rifle, he has questions she can’t answer. Why was she alive? And armed?

AND THE MAN SHE COULD NEVER SEE AGAIN
Cash is an elite member of a black ops organization, The Titan Group. He thought Nicola died his senior year of college and swore off love to focus on a decade of military missions. But when she shows up behind enemy lines, bleeding out and wielding a weapon, his heart and mind are unsure how to proceed.

BATTLE BETRAYAL TO SAVE THEMSELVES
Titan and the CIA join forces to uncover a mole hidden in a network of international terrorists and homegrown mobsters, teaming Cash and Nicola again. They fight old wounds and re-ignite sparks while closing in on a double agent. When disaster strikes, Nicola’s hidden past makes her the hunted target and Cash’s best kill shot may not be enough to save them.

My Review
The first Titan novel I read was Savage Secrets. It was good so when Sweet Girl came out, I quickly devoured it and couldn’t wait to see what happened next. I “ran” to the iBookstore and picked up the entire Titan boxed set and decided to read them in order, starting with Winter’s Heat. But the shiny stack of ARCs sitting on my virtual bookshelf kept calling to me and I set it aside until my Hart Attack ARC arrived. Suddenly, I needed to know the rest of Nicola and Cash’s story before I read about Roman.

I know the author wrote Garrison’s Creed first, then followed it up with the prequel, but if you haven’t read either of these books yet, start with Sweet Girl. I think it’s much more bittersweet seeing how they meet up again after knowing their story, watching how losing Nic affected Cash. With that disclaimer, Garrison’s Creed is every bit as good as Sweet Girl and Nic and Cash are my favorite Titans.

After believing Nicola Hart died a decade before in a fiery car crash, Cash and his best friend, Roman, who is also Nic’s older brother, threw themselves first into the military, then into special ops with Titan. The job always came first and any women on the side were just for fun. No one would own Cash’s heart again, at least until he discovers Nic is alive, working for the CIA.

There’s a lot for both of them to deal with. Cash understandably feels both unfathomable relief as well as heart-crushing betrayal. He’s bitterly angry but does try to understand. Nic is dealing with regret and overwhelming guilt. But these two belong together and it’s only a matter of time for them to realize what everyone else already knows.

Plot
The main plot is the romance between Cash and Nic. There’s a lot of conflict there to work with, and the sweeter moments are a nice contrast. The secondary plot involves a potential double agent with the CIA who may or may not want Nic and Cash dead. About the only thing that keeps this from being a full five-stars for me is the addition of a third point of view. Being inside the antagonist’s head gives us glimpses into things Cash and Nicola can’t know and removes some of the tension. I’m not sure that extra POV really adds anything to the story.

World Building
Cristin Harber excels at creating believable worlds of spies and special ops for hire. The added conflict and suspense that her setting brings to her stories makes that ultimate happily ever after much more satisfying. As a CIA operative, Nicola and Cash’s path to happiness is a minefield at best. And just when we get to the point where things seem to be heading in the right direction, the author raises the stakes again, unfolding believably in the world she’s created.

Characters
The Titan characters are always strong. What I love is the way Cristin Harber really differentiates character voice so that I never feel like it’s the same character over and over again. I also love that even though Cash and Nic are a decade older than in Sweet Girl, they are still very much themselves, just more mature. We get to see a bit more of Roman in this, too as he comes to terms with his sister’s reappearance and the fact that his best friend is sleeping with her. And I’m already rooting for Beth and Roman.

Top Five Things I Love About  Garrison’s Creed
1. Cash’s Cowboy Hat. I’m not normally into cowboys, but Cash makes a strong argument for reconsidering that.

2. Nicola’s Love of Fashion. It makes her more human and shows her girly side.

3. Their First Kiss. That kiss on the ground in front of the truck — hot!

4. The Cash-Roman-Nic Chemistry. It’s nice to see this chemistry first introduced in Sweet Girl is still intact, albeit somewhat strained.

5. Jared’s Begrudging Respect for Nic. Jared is gruff, no two ways about it, but seeing the way he respects Nic makes me like him just a little bit more than I already did.

Bottom Line
Garrison’s Creed continues Cash and Nicola’s story with plenty of the action and suspense we expect from Cristin Harber.

Fans voted her onto Amazon’s Top Picks for Debut Romance Authors in 2013, and her debut Titan series was #1 romantic suspense, #1 military romance, and a USA Today Top 100 bestseller.

She lives outside Washington, DC with her family and English Bulldog.