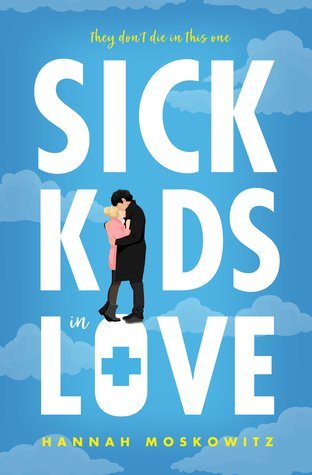 Synopsis
Isabel has one rule: no dating.
It’s easier–
It’s safer–
It’s better–
–for the other person.
She’s got issues. She’s got secrets. She’s got rheumatoid arthritis.
But then she meets another sick kid.
He’s got a chronic illness Isabel’s never heard of, something she can’t even pronounce. He understands what it means to be sick. He understands her more than her healthy friends. He understands her more than her own father who’s a doctor.
He’s gorgeous, fun, and foul-mouthed. And totally into her.
Isabel has one rule: no dating.
It’s complicated–
It’s dangerous–
It’s never felt better–
–to consider breaking that rule for him.

My Review
There are few young adult contemporary romances that really make me think in a new way, but SICK KIDS IN LOVE did just that. My own three children suffer from an autoimmune disease that is nowhere near as severe as what Ibby and Sasha have, but it does impact their lives, since it affects what they can eat, something they do three times a day. It was refreshing to read about teens who live a life in spite of, as well as under the constant influence of, a chronic illness. Add to that both main characters are Jewish, and this is a story unlike anything else I’ve read. I’ll admit that I was worried at first. I mean the title leaves a lot open-ended. How sick? Will one or both of them die? But I’m pleased to report, without spoiling anything since the author has freely admitted this publicly, NO ONE DIES!

Isabel has rheumatoid arthritis, requiring her to get regular fusions. At one of these visits, she meets Sasha, a charming boy with gaucher disease. The two flirt, but Ibby has a no-dating policy for reasons that become clear about mid-way through the book. Her father is chief physician in the same hospital, so she spends a lot of time there, not only visiting him, but volunteering one day a week. This creates a collision course between Sasha and Ibby, sooner rather than later, and an instant friendship develops. It’s clear Sasha wants more, but Ibby holds firmly to her no-dating rule. But the more time they spend together, the more obvious it is that she feels more than just friendship for this boy. Witty banter and obvious chemistry gets the reader rooting for these two to end up together. But Sasha and Ibby have deep issues they’ll both need to overcome if they can be more than friends.

Plot
The heart of the story is the relationship between Ibby and Sasha. Feelings develop slowly, though the attraction is immediate. The friendship flourishes because they have more in common than just their respective illnesses. But there are also huge differences that drive most of the conflict. Ibby is rigid and deeply wounded. Sasha is easy going and eager to please. This makes things between them seamless at first, but ultimately comes between them. There is a HUGE twist I never saw coming that turns Ibby’s world upside down. It could have become a cliche, but instead the author uses it as a catalyst for Ibby to see her flaws in a new light rather than turning it into a huge angsty situation creating drama for the sake of drama.

Characters
The characters are so deeply drawn and real in every sense. Ibby has deep wounds, the origins of which are revealed slowly. She’s forced to face the reasons she refuses to date as her feelings for Sasha grow, but her transformation isn’t complete for a long time. In fact, like all humans, she continues to be a work in progress through the end. We learn that Sasha is more than just a light-hearted guy who lets everything roll off him. One of the best ways the author lets us inside the minds of her characters in a story told from a single point of view is through Ibby’s high school newspaper column. She asks people around her a variety of questions and we get to learn who they are through their answers.

What I Loved About SICK KIDS IN LOVE
1. New York City. Both kids live in the city in small apartments and take the subway to get around. The setting is as much a part of the story as the characters.

2. Sasha. I love his outlook and positive attitude and the way he’s honest, open, and caring.

3. Ibby. She’s had so much to deal with in her short life, and while she lets it get to her at times, she’s determined to rise above it.

4. Reality. The author paints a portrait of the daily lives of those living with a chronic illness, neither romanticizing it in any way, nor making it more depressing than it needs to be. This is life for so many Americans, and it’s an honest portrayal of their normal.

5. Friends. Ibby’s friends, all healthy teens, play various roles in her journey. Their responses to her illness and her relationship with Sasha give readers an opportunity to see how our responses as healthy people impact those with chronic illness without coming across as preachy.

Bottom Line
An honest, heartfelt story of teens who are anything but average, doing their best to live average lives. 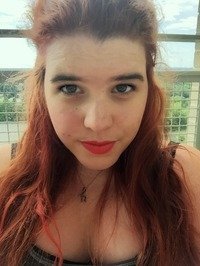 About the Author
Hannah Moskowitz wrote her first story, about a kitten named Lilly on the run from cat hunters, for a contest when she was seven years old. It was disqualified for violence. Her first book, BREAK, was on the ALA’s 2010 list of Popular Paperbacks for Young Adults, and in 2013, GONE, GONE, GONE received a Stonewall Honor. 2015’s NOT OTHERWISE SPECIFIED was named the YA Bisexual Book of the Year. She’s also the co-author of GENA/FINN with Kat Helgeson and has contributed to several anthologies. She lives in Maryland with several cats, none of whom are violent.