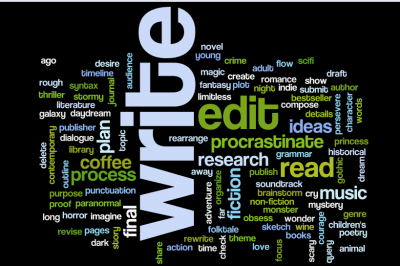 My beautiful blogger/gluten-free/writer friend, Debi Smith, invited me to participate in The Writing Process Blog Tour. The Tour began some time last year, with each participant answering four questions about their work in progress then inviting a few more writers to participate. You can trace it back it its roots if you’re really interested (or bored). You can read Debi’s post and see who invited her on her blog, Chocolate Wasteland.

What are you currently writing?
I’m working on final edits to The Union, the first book in a young adult adventure series. It’s set 100 years after global warming and a second civil war have reshaped the United States into the Union, a green-energy, utopian society that hugs the coastlines of the former U.S.

I’ve been working on it for more than three years, revising it based on feedback from beta readers and my fabulous critique group, and now it’s almost done. I’ve already drafted books 2-4 in the series and will work with my critique group on the second book next.

What makes your work different?
While some have tried to classify it as dystopian, it’s really not. I know there are some elements that fit into that category, but the book isn’t anywhere near as dark and hopeless as almost everything else in that genre. Instead, it’s an optimistic adventure that just happens to be set in the future. It compares and contrasts a semi-socialistic utopian society with a world devoid of law and order, but with complete autonomy.

My characters stretch the upper age limit of young adults, straddling the young adult/new adult line. And while there is a love triangle, it’s very different than almost every other one I’ve read. The two boys are as different as the two worlds they come from and it’s not so much about a choice between two boys as it is a choice between fate and desire, with each boy representing one of those elements.

Why do you write what you do?
I don’t like rules. Sure, there are rules we have to follow. I can’t write a story that wanders aimlessly, without world building or character arcs, but I didn’t want to be constrained to the conventions of the world we live in now. By setting it in the future, I get to make up my own rules, decide which of our technological wonder devices survive and which don’t. I get to create a society that functions the way I want it to and choose what happens when things fall apart.

Once I decided when I wanted my story to take place, I had to think about the logical flow of the world we live in now and what it might take to get us to my imaginary world 150 years from now. That was really fun. It was a chance to take the what-if scenario on climate change to one possible conclusion.

As to why I chose young adults as my characters, well, that’s a post all its own.

How does your writing process work?
It’s an evolving process, but I think after drafting four books, editing three, and running one through my critique group, I have something that works well for me.

I always start with a general idea of what I want to accomplish with the book. I visual the opening and the ending and then decide on at least three major plot points. Once I have that, I do a quick rough outline, draft my character arcs, and begin the detailed outline in Scrivener. Scrivener is easily the best $50 I’ve ever spent. 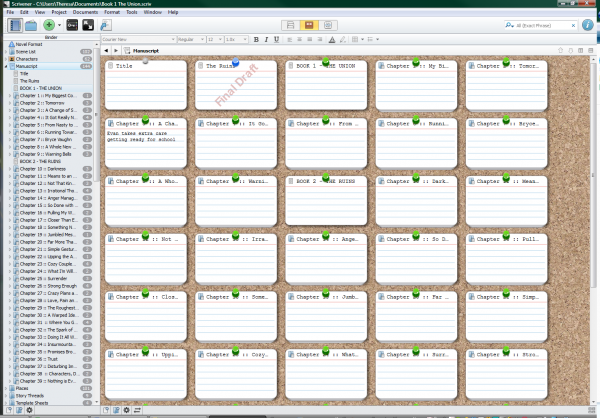 When my outline is done, I create my writing soundtrack. Every book has a theme song, the music that feeds my soul as I write, and the soundtrack builds on the theme song. I conduct any research I’ve identified during my outlining, scour the internet for photographic inspiration, if needed, and then pop in my ear buds, launch my soundtrack, and begin drafting each scene.

When I realize I need to make some changes in what I’ve already written, I jot down notes of things to fix on the next draft. I always run through the first draft without any revising at all. Then I go through three or four more drafts before seeking feedback through my critique group. After incorporating all of their feedback, I do several more editing rounds and send it off to my copy editor for final cleaning.

Who’s Next?
I’m tagging some of my favorite fellow YA writers, Jen Glenn, K.A. Cozzo, and Randi Cooley Wilson.