Why I Read and Write Young Adult Fiction 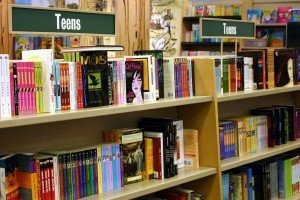 There has been an onslaught of posts lately responding to this article by Ruth Graham at Slate on why adults should be embarrassed to read books written for children. The article focuses exclusively on books written for young adults, those in the 12-18 age range. Glaringly missing is any mention of books written for younger ages. Harry Potter anyone? Something tells me Ms. Graham has probably read all seven books and seen all eight movies.

So I’m here to tell you why you shouldn’t be embarrassed to read any damn thing you want. Reading transports us to another place and time, full of vivid imagery, allowing our brains to take a magical vacation. Does it really matter if that trip is to 18th century England or to a small town in Oregon with a hidden enclave of vampires?

Sure, Twilight is not the best written series, nor does it have a stellar female protagonist to serve as a role model. But it might be responsible for launching the writing careers of countless authors who discovered you don’t need to be the best writer to tell an engaging story. And how many teen girls turned off the television to curl up on the couch and spend hours engrossed in a story where their imaginations conjured up the images instead of the pixels on a screen.

No one should feel belittled for what they choose to read. It only matters that they read. These are the words that have been drummed into the heads of all three of my children since kindergarten. It was a struggle to get them to read for many years. And with the boys, it can still be challenging to get them to disengage from Minecraft and pick up a book. But we stopped caring what they read last year when their fourth grade teachers explained graphic novels were in fact real books and counted toward their reading requirement.

I read the books my kids read so we can discuss them. As an adult, I’ve read Diary of a Wimpy Kid, all seven Harry Potter books, the Charlie Bone books by Jenny Nimmo, and yes, countless young adult novels, including almost every one listed in Ruth Graham’s piece. And it doesn’t embarrass me in the least. I’ve also read all of Jane Austen’s novels, War and Peace, Lolita, A Confederacy of Dunces, and dozens more on Amazon’s list of the Top 100 Books to Read in a Lifetime. I enjoy reading. Everything.

But when I chose to write my first novel, I spent a lot of time selecting the setting and my character’s ages. And I chose young adults. Yes, on purpose. Young adults are fantastic and every adult has one thing in common: we all used to be young adults. In fact, there are times I’m sure I’m perpetually 14 years old. And secretly a boy. Because I find bodily functions hilarious and I think Adam Sandler is a comedic genius. My 11 year old sons love that I’m the first to make inappropriate fart jokes. My 14-year old daughter is horrified by this same trait.

What I love about young adults is that everything is just so…SO. Huge. Every thought and feeling is amplified a thousand times and everything that happens to them is either the best or worst thing in their entire lives because their lives aren’t all that long yet. So yeah, your first kiss IS the most romantic thing, or the most awful thing, because it’s the first. The first love, first time driving, first beer, everything is just so…SO. Intense. And that’s fun to write about. It gives characters license to think and behave in ways that would be incredibly inappropriate for adults. It offers far more opportunities for growth, predicaments, and scenarios that would never fly with older characters.

And yes, there is the adult in me who realizes my inner teenager’s first thought would be inappropriate to verbalize, but that doesn’t mean my characters can’t.