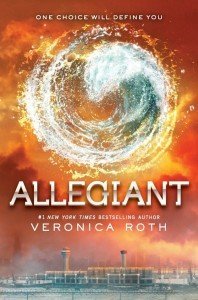 Synopsis
The faction-based society that Tris Prior once believed in is shattered—fractured by violence and power struggles and scarred by loss and betrayal. So when offered a chance to explore the world past the limits she’s known, Tris is ready. Perhaps beyond the fence, she and Tobias will find a simple new life together, free from complicated lies, tangled loyalties, and painful memories.

But Tris’s new reality is even more alarming than the one she left behind. Old discoveries are quickly rendered meaningless. Explosive new truths change the hearts of those she loves. And once again, Tris must battle to comprehend the complexities of human nature—and of herself—while facing impossible choices about courage, allegiance, sacrifice, and love.

Told from a riveting dual perspective, Allegiant, by #1 New York Times best-selling author Veronica Roth, brings the Divergent series to a powerful conclusion while revealing the secrets of the dystopian world that has captivated millions of readers in Divergent and Insurgent.

My Review
I read the book in record time, then sat on my review for almost a week. I really wanted to love this book. I wanted it so much. I waited for the release for nearly a year, pre-ordered the book and refreshed my Nook library repeatedly until it finally showed up. Sadly, I did not love this book. I’m struggling to decide if I even liked it.

I found the dual points of view a great concept, one I’ve seen executed brilliantly in a number of YA books. It didn’t work out for me with Allegiant. I felt the two voices were too similar and often and to refer back to remind myself which point of view I was reading. I thought the plot wandered, that too many things felt contrived.

I hated the ending. But not for the reasons you might assume.  It didn’t feel like a natural culmination of events, nor did it seem to serve the theme, character arc, or even the plot. I’m still scratching my head over it. The ending left me feeling flat, let down, unsatisfied. The trilogy is dystopia, my own genre, so I’m well aware that rainbows and unicorn endings are not part of the formula. But I do expect to feel satisfied.

Plot
The plot wandered and didn’t feel as concrete as the first two books in the series and I found a number of plot holes. Things that just didn’t make sense to me. This one lacked some of the interesting aspects and hope from the two previous books in the trilogy and some things just plain weren’t ever answered. And, some things were in direct conflict with the earlier books and the explanations felt forced.

Characters
I absolutely disliked Four/Tobias in this book. He came across as far less confident than in the previous books and he acted out of character far too often, to the point that I just didn’t believe he was the same character by the end. I always found him to be the most fascinating character in the series, but by the time I hit the epilogue, I found him to be pathetic and that just made me sad.

Bottom Line
I’m not sure I’d recommend this book. Ordinarily I’d flat out say no to anything rated 2.5 stars, but because Divergent and Insurgent are so amazing, I think you have to decide for yourself if you want to complete the series. I can’t give it a solid recommendation, or can I say don’t waste your time. This book is the ending of the author’s vision of the story she wanted to tell, so if you love the series, you’d be doing yourself a disservice not to complete it.

I read both Divergent and Insurgent three times. It is unlikely I will ever read Allegiant again. And that makes me sad because when you find a book you love enough to read over and over again, that’s what makes reading such a joy. And maybe saddest of all is that I doubt I will ever read Divergent or Insurgent again, because now that I know how it all ends, I’m.just.done.