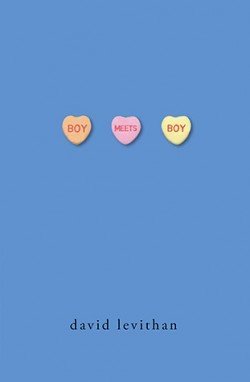 Synopsis
This is the story of Paul, a sophomore at a high school like no other: The cheerleaders ride Harleys, the homecoming queen used to be a guy named Daryl (she now prefers Infinite Darlene and is also the star quarterback), and the gay-straight alliance was formed to help the straight kids learn how to dance.When Paul meets Noah, he thinks he’s found the one his heart is made for. Until he blows it. The school bookie says the odds are 12-to-1 against him getting Noah back, but Paul’s not giving up without playing his love really loud. His best friend Joni might be drifting away, his other best friend Tony might be dealing with ultra-religious parents, and his ex-boyfriend Kyle might not be going away anytime soon, but sometimes everything needs to fall apart before it can really fit together right.This is a happy-meaningful romantic comedy about finding love, losing love, and doing what it takes to get love back in a crazy-wonderful world.

My Review
I didn’t know what to make of Boy Meets Boy at first. It seemed like it was set in some sort of rainbow-farting unicorn town where gays and lesbians aren’t bullied and are accepted as part of mainstream society. But soon I realized that the town itself is a character in the story and is much a part of the fabric as the plot and the characters. Once that became evident, the town itself faded into the background as the story unfolded seamlessly before me. It’s a sweet romance filled with smart, breakaway characters, and the fact that some of them are gay is completely irrelevant.

Plot
This is largely a character-based novel, but the plot is still engaging. Paul meets and falls for new boy in town, Noah. Paul royally messing things up Noah and works hard to get him back. But it’s also about the dynamic between Ted and Joni and Chuck. And between Tony and Tony’s parents. And between Kyle and everyone. The only downside is that it’s not at all about Infinite Darlene who is by far my favorite character in the story.

The main story arc ebbs and flows and the subplots are divine little tributaries taking you on side excursions you might have otherwise missed. It all comes together at the Dowager’s Dance with a death theme that Paul and his friends architect to sublime perfection.

Characters
The characters are the best part about this book. All of them. They’re so fun and fresh that none of them feel like a stereotype or a cliche. The only exception might be Tony’s parents, but even they are less stereotypical than your average conservative religious parents struggling to come to terms with the fact that their son is gay. And even the town is layered and nuanced. It’s a place I’d want to live in. Heck, it’s the place everyone should live.

Bottom Line
Everything about this story is delightfully original and flawlessly executed. It feels like happiness wrapped in a cloud.