Young Adult Book Review – Jake and the Other Girl (Monument 14 #1.5) by Emmy Laybourne 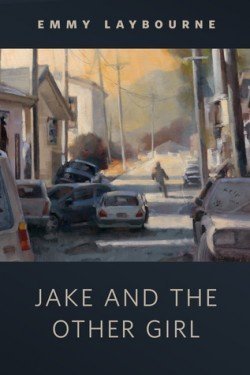 Synopsis
The apocalypse has hit Monument, Colorado, and Jake Simonsen, captain of the football team, is caught in the middle of it. A series of escalating disasters, beginning with a monster hailstorm and ending with a terrible chemical weapons spill that affects people differently depending on blood type, has torn the world as he knows it apart. Now Jake has to decide how to pick up the pieces.My Review
Jake and the Other Girl picks up Jake’s story after he leaves the Monument 14. We get inside his head and learn why he left Astrid, the popular girl who is pregnant with his baby. Jake has issues. His blood type has left him impotent, a fate worse than death for a boy like Jake. When he stumbles upon a girl he knows from school, a girl he knows intimately, he hopes she’ll stir something in him.

But they’re not alone, and once again Jake will have to make a decision to stay or go. Jake and the Other Girl is a nice bridge between Monument 14 and Sky on Fire. It fills in some blanks and shows us what drives Jake. He becomes a little more likeable once we understand him. Sure, he’s still a putz, but he’s a tolerable putz.

Plot
It’s a short story, only 26 pages, so the plot isn’t meaty or deep, but it does move the story forward, providing additional pieces to the puzzle of what happened outside the Greenway where the Monument 14 have been holed up. Its primary function is to develop Jake’s character, which it does nicely.

Characters
Only three characters are in Jake and the Other Girl. One being Jake, the other is well, the Other Girl, also known as Lindsey, and Lindsey’s father, who has the same aggressive blood type as Astrid and Dean. Lindsey is only 15 and Jake is 18 which makes their physical relationship ten kids of wrong, but it shows us so much more about Jake’s character than if she’d been older.

Jake is a piece of work. He’s immature, selfish, and pretty much only thinks about sex and drugs. But there is more to Jake than that. Emmy Laybourne has actually crafted a fascinating character in Jake. He seems like a stereotype, and yet, there is more to him than the just the drug-taking star athlete who knocks up the most popular girl in school. He’s a cliche and yet he’s not. All presented in just 26 pages.

Bottom Line
This is really Jake’s story and while it doesn’t absolve him of his sins, it helps us understand the Jake we never knew. And that’s a good thing.