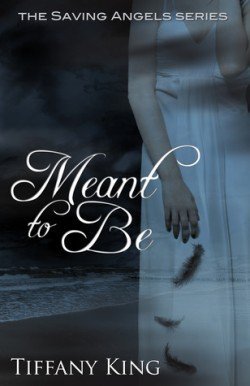 Meant to Be by Tiffany King

Synopsis
Krista Miller feels like she has lived her entire life in a glass box with her every emotion on display. She can’t help feeling like a defect as her sensitivities have made her socially inept and without any real friends; the one exception being the boy that visits her each night in her dreams.

Krista’s emotions are put to the test when a move to California triggers a devastating change to her fantasy world. The nightly comfort that the boy provides has now become a recurring nightmare as he is taken from her by an unseen force.

Struggling to appear normal, Krista enrolls in a new school and finds it to be nothing like she thought. Her new life is sent spiraling out of control from a strange connection with a boy, Mark, who claims to know all her secrets.

As Krista begins to explore the emotions that Mark evokes in her, secrets about their mysterious past and their predestined purpose threatens to separate them just when they have found each other.

My Review
I want to start off by saying I love Tiffany King, but this book didn’t do it for me. Unlike many books I read, it started off strong and fell apart toward the end. Usually books start off slowly and then grip me by the middle.

Meant to Be started strong with a great concept. Krista sees the same boy in her dreams every night. She’s in love with the boy in her dreams even though she’s never seen his face. After she and her mom move to Santa Cruz following her father’s death, her dreams change, becoming darker and leaving her feeling empty. They still include the mystery boy, but something has changed and her dreams no longer bring her comfort.

The story stalls about midway through, but builds to a stronger finish, although it had more loose ends than I was hoping for and ends abruptly.

I didn’t feel the connection between Krista and dream-boy Mark. Tiffany King does a masterful job of building that chemistry in her other books, particularly Unlikely Allies and Forever Changed. In fact, she does it so well, it compels me to buy anything she writes. But Krista and Mark’s relationship felt forced after the initial spark.

Plot
The concept is really good and unique, but I think it could have been expanded and drawn out a little more. Although I’m interested to see what happens next.

Characters
To me, the characters were the weakest aspect of the book. I don’t like Krista at all and I’m having a hard time understanding who Mark is or why he even likes Krista. Maybe it’s just that they’re meant to be, but that isn’t good enough for me to feel it. Also, Krista has just discovered that another boy, Shawn is likely her brother, but she doesn’t develop much of a real relationship with him, even though she’s been raised as an only child. That didn’t ring true to me.

I really liked Sam and Shawn, though. They were far more interesting than Mark and Krista.

Bottom Line
Interesting concept, some unique plotting, and a decent climax. If you like paranormal romance with a twist, you should enjoy Meant to Be.