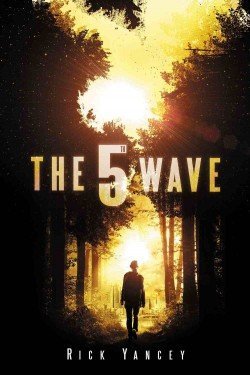 The 5th Wave by Rick Yancey

Now, it’s the dawn of the 5th wave, and on a lonely stretch of highway, Cassie runs from Them. The beings who only look human, who roam the countryside killing anyone they see. Who have scattered Earth’s last survivors. To stay alone is to stay alive, Cassie believes, until she meets Evan Walker. Beguiling and mysterious, Evan Walker may be Cassie’s only hope for rescuing her brother—or even saving herself. But Cassie must choose: between trust and despair, between defiance and surrender, between life and death. To give up or to get up.

My Review
The 5th Wave is unlike almost any book I’ve read. It’s dark on a whole new level and almost completely devoid of any hope, and yet it’s riveting. The story starts off after the 4th wave, when Cassie doesn’t know who she can trust. Through flashbacks, we get to see how she got to this awful point and it’s terrifying. Now she’s on a mission to get to her younger brother, Sammy, the only family she has left and therefore the only person on earth she cares about.

The tale unfolds through 91 chapters broken up into 13 “books.” Most of the story is narrated in first person from Cassie’s point of view, but about a third of it is told from another survivor, nicknamed Zombie, and a small piece through the eyes of a mysterious “silencer.”

As Cassie tries to survive and get to her brother, she runs into the sexy and mysterious Evan Walker. Against all instinct, she decides to trust him because she doesn’t feel she has any other choice. Meanwhile Zombie and a crew of other kids, train to take down the aliens. It becomes clear that Cassie and Evan are on a collision course with the Zombie and his friends and that keeps the pages turning.

Plot
The plot is complex and well structured, but it is long and plods along in some spots. I found it difficult in the middle to keep going, even though I really wanted to know what happened to Cassie, Evan, Zombie, and Sammy. But the story picks up during the second half and takes off, making it very difficult to put down.

Characters
Cassie is an interesting character and reminds me much of Ellie Linton from the Tomorrow When the War Began series by John Marsden. And maybe what both kick-ass characters have in common is that they’re both conceived and written by male authors, giving them a harder edge than many female protagonists. But Cassie’s roughness is part of what I love about her.

Zombie and Sammy are also likeable and I know it’s not a popular opinion, but I actually really like Evan. I know a lot of readers found him creepy, but I love that he’s willing to risk everything for Cassie. When he says, “Before I found you, I thought the only way to hold on was to find something to live for. It isn’t. To hold on, you have to find something you’re willing to die for.” I knew my feelings about him were forever changed.

Bottom Line
The 5th Wave is scary, intense, and at times, hard to put down. At 497 pages, it’s long for a debut author and my only real complaint is that the middle sags quite a bit. But it’s worth slogging through to get to the other side which is an E-ticket ride all the way to the finish.