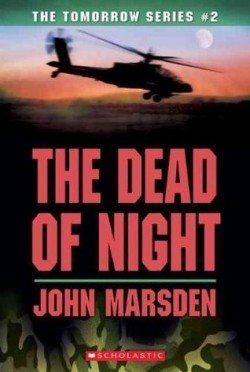 The Dead of Night (The Tomorrow Series #2) by John Marsden

Synopsis
A few months after the first fighter jets landed in their own backyard, Ellie and her five terrified but defiant friends struggle to survive amid a baffling conflict. Their families are unreachable; the mountains are now their home. When two of them fall behind enemy lines, Ellie knows what must happen next: a rescue mission. Homer, the strongest and most unpredictable among them, is the one to take charge. While others have their doubts about his abilities, Homer has no choice but to prove them wrong – or risk losing everything to the enemy.

My Review
The Dead of Night picks up where Tomorrow When the War Began leaves off. The characters struggle with what they did and worry about their friends Corrie and Kevin. Hell is home and the only place they feel safe, but they also know that sitting around and doing nothing isn’t a long-term plan. Once again, they feel compelled to do something. They explore beyond their immediate surroundings and stumble upon another group of free citizen who call themselves Harvey’s Heros.

After blowing up the bridge at Cobbler’s Bay, Ellie and her friends bristle at being treated like kids by this new group and  feel more like captives than the warriors they are. But when the enemy gets too close for comfort, they need to make some tough decisions.

Plot
The plot is gritty, and as with Tomorrow When the War Began, it’s difficult to put down once it really gets going. What makes it so gripping is that it’s terrifyingly real. Unlike other young adult dystopian novels, it isn’t a stretch to get to where these kids are. John Marsden doesn’t rely on alien invasions or weird supernatural events to bring about his world. Everything that happens feels like a natural culmination of events that could really happen.

Characters
The core characters are strong and even the new cast members have more depth than you would expect from tertiary characters. Major Harvey in particular is complex and hard to pin down.

Ellie and the others are deeply affected not only by what happened to Corrie and Kevin, but also by what they did. There are no quick fixes to the psychological trauma they experience which makes this book dark, but emotional and real. One of my favorite things about John Marsden is that he doesn’t gloss over the aftermath and have his characters act as if they didn’t just suffer horrible losses or inflict unimaginable pain on others. They’re haunted by the things they’ve seen and done, the way human beings they are.

Bottom Line
The Dead of Night is a solid follow up to Tomorrow When the War Began and carries the story forward without losing the magic of the series. It builds on the plot and characterization from the first book and doesn’t let up.