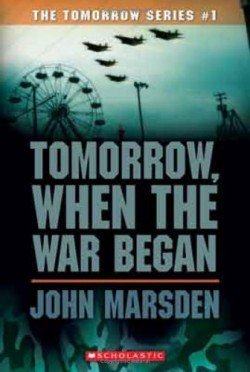 Tomorrow When the War Began (Tomorrow Series #1) by James Marsden

Synopsis
When Ellie and her friends return from a camping trip in the Australian bush, they find things hideously wrong — their families are gone. Gradually they begin to comprehend that their country has been invaded and everyone in their town has been taken prisoner. As the reality of the situation hits them, they must make a decision — run and hide, give themselves up and be with their families, or fight back.

My Review
There are not enough words to adequately describe how MUCH I love this book. It’s intense, and thrilling, emotional, raw, witty…everything I love in a book and more. The story is set in Australia, where a group of teens decide to take one last camping trip before school starts back up. While camping deep in the bush, their country is overtaken by an enemy that is never fully defined, but that feeds the plot so perfectly. And because the teens don’t know who is behind it, neither does the reader.

As the reality of what has happened slowly dawns on Ellie and her friends, a chill washes over the reader. It is so utterly believable that you can’t help but get caught up in the story, feel the initial shock and growing fear as they realize everyone they love is gone, their pets dead, and they have no idea what has happened.

Slowly they put the pieces together and decide to fight back, first against their own fears, and then against the enemy. The emotion that John Marsden brings to the story is authentic. As a high school teacher, he has a deep understanding of the teenage mind and draws his characters so beautifully real that it’s hard to remember they’re fictional.

Plot
The characters deal with the realities of life in a country ripped from under them and the ugly realities of war. They’re the only ones left to do something, and yet nothing in their lives has prepared them for it. The story starts off a little slow, but not haltingly so. John Marsden beautifully sets up his pivotal moment, building to the unfolding horror like a steady climb up the steps of Hell, where the kids have been camping. And then it takes off at breakneck speed, from one intense moment to the next, allowing us only small moments to catch our breath.

Characters
The characters are what really make this book what it is. Yes, it has a pulse-pounding plot, but the nuanced complexities of Ellie, Homer, Fi, Robyn, Corrie, Lee and Chris take the story from just a thriller to something so much deeper. Ellie is a fun-loving only child who considers her friends to be family. The way she adores her friends makes me adore her even when she’s getting on my last nerve.

Homer is the guy I want to hang out with, the one I want as my best friend. He’s a crazy Greek with streak for getting into trouble, but would never abandon you in the thick of things. He’s definitely the guy you want along on your camping trip or an attack on an unknown enemy.

Corrie is Ellie’s best mate, the one she’d do anything for. Their relationship is at the heart of the story and ultimately the most emotional and heartbreakingly real. Corrie stands by Ellie when Ellie snaps and alienates everyone else, but she does it with love and a touch of humor.

Robyn is sweet and principled and is constantly finding those principles put to the test. Standing by her long-held beliefs or standing by her friends is a battle she fights nearly every day and it’s both painful and satisfying watching her grow.

Fiona, or Fi, is the sweet, wholesome, rich girl from town hanging out with the “rural inbreds” and she’s so clearly out of her element that most of the comic relief is at her expense, but she takes it with grace.

Chris is the town stoner, but he’s no Jeff Spicoli. Chris is far deeper than I originally thought and the more I learn about him, the more I like him.

And finally, there’s Lee. What can I say about Lee except that I love him. So completely and truly. He’s a musician and the only one of the group who the others don’t really know. Ellie invites him along as a last choice because she finds him “interesting.” He ultimately becomes her love interest, but he’s much more than that. Lee is the center to Ellie’s craziness. He’s willing to do what needs to be done, regardless of how awful he finds it. He’s not immune to the consequences of their actions, but he understands better than the others that war sometimes means difficult choices and that beating yourself up constantly over those choices isn’t prudent.

Bottom Line
Tomorrow When the War Began is probably the best young adult dystopian novel you’ve never read. John Marsden has created a totally believable and horrifying world and plunked his complex characters into it to play out a what-if scenario that is brilliant on so many levels. The fact that it is just the first book in a series, and that I read the entire ten-book series in under three months, is a testament to how incredibly much I love the Tomorrow series.