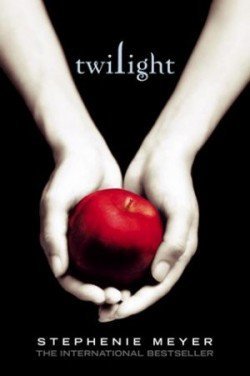 Synopsis
About three things I was absolutely positive:

First, Edward was a vampire.

Second, there was a part of him – and I didn’t know how dominant that part might be – that thirsted for my blood.

And third, I was unconditionally and irrevocably in love with him.

When Bella Swan moves to the gloomy town of Forks and meets Edward Cullen, her life takes a thrilling and terrifying turn. With his porcelain skin, golden eyes, mesmerizing voice, and supernatural gifts, Edward is both irresistible and impenetrable. Up until now, he has managed to keep his true identity hidden, but Bella is determined to uncover his dark secret.

What Bella doesn’t realize is the closer she gets to him, the more she is putting herself and those around her at risk. And it might be too late to turn back…

My Review
I read Twilight a few years ago and just now getting around to reviewing it. There was a lot of hype surrounding this book and I approached it with cautious optimism. I’d heard all the negativity as well as the over-the-top swoon-worthiness of it, but wanted to read it with an open mind. I was pleasantly surprised. It wasn’t nearly as bad as all the bashers would have me believe, but I don’t think it came even close to hitting the romantic mark. I never really felt the chemistry between Bella and Edward. These two couldn’t be less perfect for each other. But where Twilight really shines is in the world building and in the action and suspense.

Plot
Clearly the main plot is the forbidden romance. Edward is attracted to Bella’s “special” blood in a way he’s never been before. But he’s sworn to protect humans, not kill them, so he attempts to stay far away from Bella. Bella has never seen a more beautiful boy (or bigger asshole if you ask me) and can’t help falling for him. She ultimately figures out his secret and the two begin a romance that is devoid of any heat, and not just because Edward is a cold-hearted undead vampire. There is zero passion between these two. But the other vampires hellbent on drinking the elixir that is Bella’s blood provide a page-turning subplot that far surpasses the romance, making this a compelling read.

World Building
The world building is one of the strongest aspects of Twilight. Stephenie Meyer has created a world of vampires with its own rules that sets it apart from others I’ve read in the genre. Her vampires don’t die in sunlight, the sparkle, hence their need to live in places like Forks that are perpetually overcast. Her depiction of the small Washington town has more charm than any of the characters who inhabit her story. I can totally picture the town, feel the cool air, almost smell the fresh pine.

Characters
While I didn’t connect with any of the characters, I can’t deny that they are well-developed. Bella might be annoying, but she’s multi-dimensional. I have less of a sense of who Edward is, but I believe that is intentional. He’s supposed to be an enigma. Bella’s relationship with her father develops through the story from awkward to something less than awkward which is believable for a teen daughter who’s lived with her mother before suddenly moving in with her small-town sheriff dad.

Top Five Things I Love About  Twilight
1. The World Building. Stephenie Meyer has her own view of vampires and it’s radically different from the world of Dracula. It’s a fun twist.

2. The Setting. Forks, Washington comes alive between the pages in vivid fashion.

3. The Adventure. The story of the vampires out for Bella’s blood and the events that follow are what kept me turning the pages.

4. Character Development. While I’m not necessarily a fan of the characters, I can appreciate that a lot of work went into developing them.

Bottom Line
Twilight is actually pretty good. No, it’s not a good romance, but if you aren’t reading it for romance, it’s not a bad story.