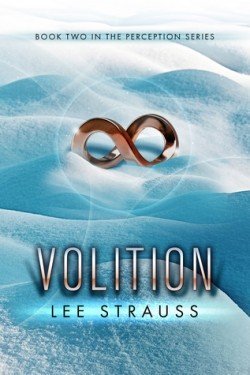 Synopsis
Zoe Vanderveen is on the run with her captor turned rescuer, Noah Brody. They’re in love.Or at least that’s what he tells her. Her memories have returned but her feelings are dreamlike—thin and fleeting. Her heart can’t be trusted. Just look at what happened with Taylor Blake.Senator Vanderveen’s new team of cyborg agents are in hot pursuit, and a reward for their capture is broadcast nationwide. Record breaking cold and snow hinder their escape. Someone dies helping them.And their fight for survival has only begun.

My Review
This is actually my favorite book in the trilogy. It picks up where Perception left off with Noah desperate to get Zoe, the genetically enhanced girl he loves, back. He kidnaps her from the beach and helps her get her memories back that her grandfather, Senator Vanderveen, took from her.

As they run from the senator and the cyborgs he sends after them, Zoe slowly remembers that she was once in love with Noah, even if she doesn’t feel that way anymore. This is the aspect of the story that really works well. Watching Zoe struggle with what she believes and what she wants to believe kept me turning the page. Some of the high-tech aspects didn’t feel fully fleshed out and there were some plot holes that turned me off, but I was invested in Zoe and Noah enough to keep going.

Plot
I found the plot lacking in some areas. There didn’t seem to be a reason behind everything that happened and those oversights tended to bother me. If it’s not important to the plot, it doesn’t belong in the book. Period. Some of the romantic tension and conflict relies heavily on miscommunication and misunderstandings, which is common in young adult romances, but it didn’t feel contrived.

My biggest issues with the story stem from the implausible high-tech portions. I had to suspend my disbelief to get through some of it. I know a lot of popular fiction sets up the implausible as plausible and with solid world-building this can be seamless, but I didn’t feel like this was the case here. It felt like we’re being asked to just accept it without question rather than the author doing her homework.

Characters
The characters were my favorite part of the story. Told in dual points of view, we get to know Noah and Zoe better. Their characters are well-developed and believably flawed. Noah, the son of a pastor has strong beliefs that are tested when he falls for beautiful, genetically modified, Zoe. And Zoe’s faith in Noah is tested when he meets someone else who is more like Noah. You know that Noah and Zoe belong together, even though they come from very different worlds, and you only hope they’ll both figure it out before it’s too late.

Bottom Line
Volition is a solid follow up to Perception and leaves you wanting more. And luckily there’s a third book that picks right up and finishes the story. I don’t normally like cliffhangers, but this one is well enough done that I’m okay with it.