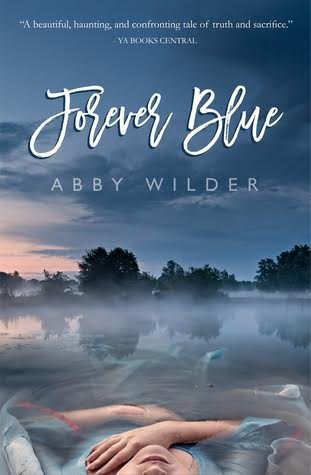 When Lennon Donnelly moves back to the quiet town of Puruwai, she never dreams that a chance meeting with a boy sitting at the cemetery will change her life. Her best friend warns her about Judah Mitchell. There are rumours that he killed his brother. But as Lennon is drawn deeper into the mysterious boy’s life, the events of his past unravel until she finds herself driving over the edge of a cliff and into the depths of the lake below.

Spanning over two years and starting at the end, this compelling novel tells of the intertwining relationships of Lennon, Ruben, Judah, and Cara. Told from the different perspectives of before and after, the story unfolds like a puzzle and reveals secrets that will haunt you long after you turn the final page.

This story contains mild use of strong language and references to underage drinking and smoking..

My Review
A week after finishing Forever Blue I’m still not sure how I feel about it, and that’s the hallmark of good storytelling. I knew going in that there would be no happy endings. I can tell you that without spoiling anything because that’s right there on the very first page. Readers know from the get-go it’s not going to be a happily ever after kind of tale, but I still don’t think I was fully prepared for the way it ended. Forever Blue is the story of Lennon, new to town after her parents split. She hangs out with her cousin who is completely opposite of Lennon. Lennon is wallflower material, her cousin is the life of the party, the girl everyone wants to be around. No one really notices Lennon or pays much attention to her until Judah. Somehow this tortured boy with a tragic past really sees her. The two begin a strange romance that only gets stranger as the past and the present collide.

Plot
The plot centers around the romance between Lennon and Judah and the mystery of what happened the year before. Judah knows what happened, but no one believes him, except Lennon. But as she learns more of the truth, she’s shocked in a way she never dreamed possible and everything she thought she knew is turned upside down.

The author slowly reveals the backstory through multiple points of view, finally giving us what we want to know in the closing chapters. The pacing is a little slow at first, but it picks up in the middle and kept me guessing until the very end.

Characters
The characters are interesting, but one thing they lacked was a lot of differentiation. They were all dark, angry, tortured. It makes sense, they all lost someone, but with so many varying first-person POVs, it would have been nice to really delve deeper into each character and find those pieces that set them apart from the others. They all sounded a little too much alike.

What Didn’t Work for Me
1. The ending. I’m still not sure what to make of it. Not everything was resolved and I’m left with just as many new questions as I am answers.

2. Multiple points of view. I understand why the author took this route and the concept works, but as I mentioned above, I would have liked more differentiation of the characters.

What I Enjoyed About Forever Blue
1. The ending. Yeah, I know, I loved it and I hated it. What can I say? It’s an enigma which leaves me conflicted.

3. The plot. I loved the unusual twists on both the mystery and the romance plot lines.

4. Twins. As the mother of identical twin teenage boys, I found this part of the story particularly intriguing. Especially since the brothers in the story were so different and mine are so alike.

5. Symbolism. The author uses symbolism throughout in sometimes unique ways that really tied the story together with the themes so well.

Bottom Line
Forever Blue is a dark young adult romance with a paranormal twist, wrapped in a mystery.

About the Author
Abby Wilder is an author from the bottom of the South Island of New Zealand. She loves stories in all forms; film, photography, music, but it’s the simplicity of written words that she loves the most . . . well, written words and binge watching television series.

Since a love of reading has remained constant in her life, she couldn’t imagine anything better than being a writer so she set out to achieve just that. Abby has one husband, two children, three cats and a dog called Joss.

Girl Behind Glass is her debut novel. Boy in Uniform is a short companion story and Girl Beneath Stars is the final in the Behind Glass Series to follow Willow Stanton..