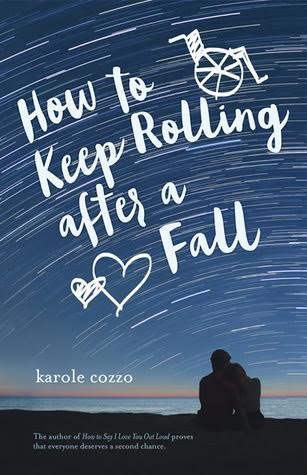 How to Keep Rolling After the Fall by Karole Cozzo

Synopsis
After a cyber bullying incident turns her life upside down, a handsome wheelchair rugby player shows a former mean girl that everyone deserves a second chance in this swoonworthy new novel from the author of How to Say I Love You Out Loud.

The party was at her house. The photos were posted to her Facebook account. That’s all the evidence anyone needed to condemn Nikki Baylor for a cyberbullying incident that humiliated a classmate and nearly resulted in the girl’s suicide. Now Nikki’s been expelled from her old school, her friends have abandoned her, and even her own parents can’t look her in the eye. With her plans for the future all but destroyed, Nikki resigns herself to being the girl everyone hates – almost as much as she hates herself. But then Nikki meets Pax, a spirited wheelchair rugby player who knows what it’s like when one mistake completely shatters your life. Refusing to judge her because of her past, he shows her that everyone deserves a second chance… and everyone deserves to be loved.

My Review
This is such a sweet, moving story. Nikki made one bad choice that seriously damaged the life of another girl, and she’s paying the price. It’s hard to feel sorry for her at first. Until you find out she didn’t act alone, but she’s the only one who’s life has been turned upside down. Nikki accepts her punishment but feels it’s unfair that her co-conspirators basically got off with nothing more than a slap on the wrist. She spends a short amount of time feeling sorry for herself before she picks herself up and tries to make the best of her situation.

Part of her sentence includes volunteering at a community rehabilitation center where she meets hot, but wheelchair bound Pax. The two strike up an unlikely friendship that turns into something more. But both have big issues to deal with and a romantic relationship will test them both in different ways. These two teens have a lot to offer each other and the world, so when the going gets tough, the tough find a way to do the right thing.

Plot
Once again, author Karole Cozzo brings us a romance wrapped in deeper issues of cyber bullying, teen driving, life changing moments, and discovering who you are underneath it all. Nikki needs to examine her part in what happened and Pax needs to learn how to let someone into what he views as his personal nightmare of being a paraplegic. Neither has an easy path and Cozzo doesn’t gloss over any of it, giving neither character an easy out.

Characters
I love the characters. Nikki goes from difficult to like to someone I root for, even eliciting a few tears from me, and I’m not much of a crier. Pax is stubborn, loyal, and thoughtful, but he’s got his own baggage that he’s forced to overcome, which he does in an authentic way.

Writing
I love Cozzo’s writing. It’s fresh and youthful, and her characters are vivid and real.

Ending
The ending was well done. It’s not an easy path, but a natural culmination of the events and the characters’ journeys, and left me completely satisfied.

Top Five Things I Loved about How to Keep Rolling After the Fall
1. Nikki’s acceptance of her role in everything. She doesn’t try to deflect the guilt onto others, but owns her part in what happened.
2. Pax’s loyalty. His acceptance of Nikki even after she confesses what she’s done is inspiring.
3. Cyberbullying. Shown both through the eyes of the bully and the bullied (separate incidents), the author brings this issue to center stage in a way that make it impossible to ignore.
4. Natural consequences. Both Nikki and Pax must face the natural consequences of their actions. Both of their lives are forever changed in very different ways.
5. The epilogue. Super cute and sweet.

Bottom Line
How to Keep Rolling After the Fall is a story of self-reflection and redemption. 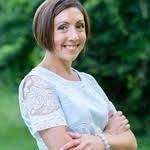 About the Author
KAROLE COZZO is a school psychologist by day, a wife and mother of two by night, and a writer of YA romance in the wee hours of the morning. She loves camping out at Starbucks, breakfast cereal at all hours, and watching every movie made from her favorite YA books. How to Say I Love You Out Loud is her debut novel.