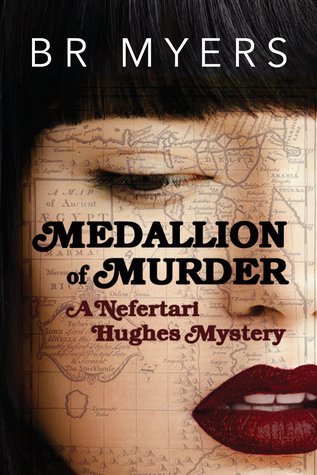 Synopsis
Still struggling with nightmares from the past summer, Terry tries to bury her secret guilt and enjoy her family’s first Christmas in Devonshire. But when a murdered man is found with a postcard addressed to her, Terry fears the repercussions from that fateful night in Egypt are becoming a reality.

After she receives a coded message from Awad, Terry and her best friend Maude are thrown into the hunt for a lost medallion, an artifact that possesses a great power—and a gruesome destiny. As each clue leads to more disturbing truths (and bodies), Terry begins to suspect she’s the real target of the search. When Awad goes missing, she becomes certain the Illuminati are involved, and has no choice but to risk losing the thing she cherishes the most to get him back.

But Terry will soon discover the secrets of the tomb cannot be erased by distance or power, because the ghosts of her past are closing in quickly… and this time, they refuse to stay buried.

My Review
While I realized this was the third book in a series, its a mystery and in most cases, you can pick up any book in a mystery series and read it as a stand-alone. That is not the case with MEDALLION OF MURDER. This book builds on the events of the previous two books in the series. While it’s easy enough to follow the plot, a lot of the surprises and twists would no doubt have more impact if I’d read the other books first. With that said, I enjoyed this one enough that I will go back and read the other two books. I recommend reading them in order.

Nefertari (Terry) Hughes is the daughter of a noted archeologist who wants her to follow in his footsteps, but her recent adventures have her longing for a future in law enforcement. She’s haunted by past events and struggling with her role in them. On Christmas Eve, out with her best friend Maude, they run into a situation tied to what happened in Egypt, that launches Terry and her friends into their latest mystery. With a coded message from her friend Awad and a mystery gift, they spend their winter holidays attempting to solve another puzzle with dangerous consequences.

Plot
The plot centers around the mystery, but with several subplots involving Terry’s life choices and her relationships with her friends. The events that unfold are masterfully crafted to keep the story moving at the perfect pace. The clues gave me just enough information to make me think I knew what was going on. With the history of the other two books, I may have figured things out sooner, but I love that I didn’t; it was more of a true mystery this way. There is some paranormal/urban fantasy elements, but otherwise feels more like a contemporary mystery. But those elements add interest and surprising ways for events to unfold. Lots of action and adventure, puzzles to solve, and a bit of romance round out a really nice young adult mystery.

The Characters
Told in third-person, single-point-of-view, I felt at a distance from the characters. I got a better sense of who Terry was, but for the most part, the rest of them didn’t resonate deeply with me. They’re all likable enough, but this is a plot-driven story rather than character-driven so the characters aren’t crucial to me being able to enjoy the tale.

Top Five Things I Enjoyed About MEDALLION OF MURDER
1. Imperfections. I loved the diversity of the cast. With Terry’s prosthesis and Jackson’s blindness, the characters’ imperfections made them easier to root for.

2. Mystery. I love a good mystery and this had all of the elements to keep me invested to the very end.

3. History. The way the author weaves in historical figures and events into the story brought a young Indiana Jones feel.

4. Action. Plenty of action and adventure kept the plot from stalling.

5. Zach. As the love interest, Zach was the perfect romantic partner for Terry, making me want to read the first two books in the series so I can see how their romance evolved.

Bottom Line
A young adult whodunit with paranormal and historical elements making this not your average mystery.

About the Author
Always in the mood for a good scare, B.R. Myers spent most of her teen years behind the covers of Lois Duncan, Ray Bradbury, and Stephen King. Her YA contemporary coming of age novel, GIRL ON THE RUN, was chosen by the Canadian Children’s Book Centre as a BEST BOOK for TEENS for 2016.

When she’s not putting her characters in awkward situations, she works as a registered nurse. A member of the Writer’s Federation of Nova Scotia, she lives in Halifax with her husband and two children—and there is still a stack of books on her bedside table..