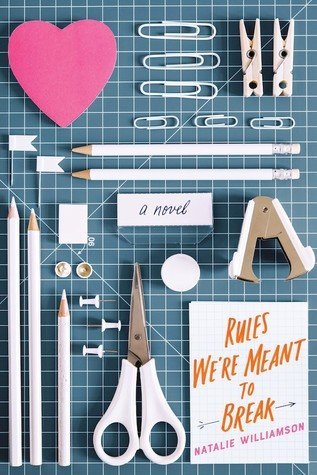 Synopsis
Honest and full of heart, this clever contemporary romance debut deftly combines utterly relatable family drama with all the sweetness and uncertainy that comes with falling in love.

Amber lives by strict rules to survive her mother’s love life: Always keep your eyes on the horizon and never get close to anyone connected to Mom’s boyfriends.

But after they move in with Kevin, the latest of her mom’s “soul mates,” the rules become increasingly difficult to follow. Kevin’s daughter, Cammie, keeps acting like Amber’s friend, even though she’s definitely not. And Jordan—star basketball player, hottest boy in school, and Cammie’s best friend—keeps showing up at the most inconvenient moments.

Amber has reasons for every one of her rules, and following them is the only way to protect her heart when her mom inevitably moves on. But as she spends more time with Kevin, his daughter, and especially Jordan, she starts to wonder if the rules might be worth breaking this time.

Chosen by readers like you for Macmillan’s young adult imprint Swoon Reads, Rules We’re Meant to Break is a charming, heartachingly real story of family and young love by debut author Natalie Williamson.

“The last time I devoured a book like this—I can’t even remember. … It was so openhearted and raw.” —Clarissa, reader on SwoonReads.com

“It is such a true true story about a girl finding herself within her first love. I loved it!” —Forever Bookish, reader on SwoonReads.com

My Review
This is such a cute young adult romance. Everything from the settings to the characters sucked me in. Amber lives with her single mother, her father having left them when she was just five. Her mom bounces from one relationship to another, and after a particularly difficult breakup for Amber, she vows never to get close to anyone her mom dates again. This becomes challenging when they move into her mom’s then boyfriend’s place early in Amber’s senior year of high school. To make matter’s worse, this guy has a teen daughter who goes to Amber’s school. Said daughter, Cammie, is no bigger fan of the situation than Amber is. The only thing that makes the situation mildly tolerable is that hot Jordan Baugh lives down the street from her new house. Much to Amber’s surprise and delight, he seems to be flirting with her! And in a perfect world, that would be awesome, but Amber’s world is anything but perfect. It appears that Cammie has some sort of a history with Jordan and that breaks Rule No. 7 on her list of rules for surviving her mother’s dating life. If only Jordan wasn’t so incredibly adorable and insistent.

Plot
The plot centers around Amber’s relationship with Jordan, but is laced with Amber’s lack of a belief in relationships that can last and a fierce need to protect herself from getting hurt again. With the help of her best friends Hannah and Ryan, she navigates tutoring Jordan while attempting to hold fast to her “rules”. But feelings have a way of getting in the way of the best intentions. Strong subplots include tense relationships with her mother, Cammie, and her mom’s boyfriend, as well as Amber’s plans after graduation. She has her heart set on KU while her mother is dead set against it. All of these subplots weave expertly into the main plot for a compelling story beyond just the romance.

Characters
I love the characters so much. Amber is so relatable as a teen girl hell-bent on protecting her heart. Jordan is beyond adorable and it’s easy to see why Amber is attracted to him against her better judgments. Hannah is the perfect loyal best friend, even when she feels as if her friend isn’t necessarily doing what’s in her own best interests. And Cammie is suitably complex making her a standout character. Everyone comes across as authentic and well developed, creating balanced and nuanced relationships that drive the story.

What I Loved About RULES WE’RE MEANT TO BREAK
1. Buffy. The German shepherd adopted by Amber is cute, smart, loyal, and makes Amber a better person.

2. Buffy. The OTHER Buffy. The one Buffy is named for. The Buffy the Vampire Slayer references peppered throughout are lighthearted and actually tie several things together.

3. Jordan. The adorable basketball player with a penchant to capitalize words that excite him is a boy worth swooning over.

4. Angsty Romance. My favorite kind. With Amber’s insecurities and her list of rules, there was no way this romance wasn’t going to come with a health dose of angst. It just has a way of pulling at my heartstrings. I love, love, love it.

5. Realistic Growth. While Amber has some amazing growth, I love that she isn’t totally transformed. Her history is so ingrained in who she is that by the end she’s only tentatively stepping forward into the unknown rather than fully embracing it, giving this a really realistic vibe.

Bottom Line
Fabulous characters in realistic predicaments and a swoony romance to boot. 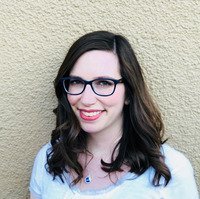 About the Author
Natalie Williamson is an HR person by day and a YA writer by night and nap time. She referenced Harry Potter in her first ever full time job interview, which tells you almost all the things you need to know about her. Other important things to know include: she loves her husband, daughter, dogs, and cat; she has a serious dessert problem; and she frequently Wikipedias movies and TV shows to find out if they have happy endings. RULES WE’RE MEANT TO BREAK is her debut novel..