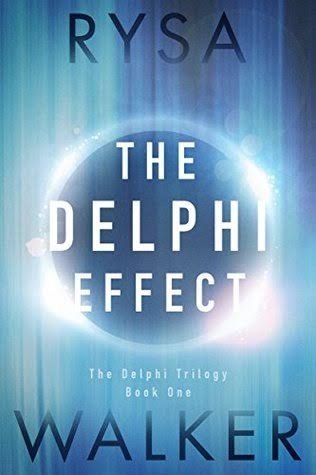 The Delphi Effect (The Delphi Trilogy #1) by Rysa Walker

Synopsis
In this thrilling new series from Rysa Walker, the award-winning and best-selling author of Timebound, a teen psychic is the key to stopping a government conspiracy.

It’s never wise to talk to strangers . . . and that goes double when they’re dead. Unfortunately, seventeen-year-old Anna Morgan has no choice. Resting on a park bench, touching the turnstile at the Metro station—she never knows where she’ll encounter a ghost. These mental hitchhikers are the reason Anna has been tossed from one foster home and psychiatric institution to the next for most of her life.

When a chance touch leads her to pick up the insistent spirit of a girl who was brutally murdered, Anna is pulled headlong into a deadly conspiracy that extends to the highest levels of government. Facing the forces behind her new hitcher’s death will challenge the barriers, both good and bad, that Anna has erected over the years and shed light on her power’s origins. And when the covert organization seeking to recruit her crosses the line by kidnapping her friend, it will discover just how far Anna is willing to go to bring it down.

My Review
Part paranormal, part thriller, part scifi, this book is really unique. Seventeen-year-old Anna has an unusual ability to channel the dead by touching something they have also touched. It’s like The Sixth Sense, except the dead know they’re dead, they just have something left undone before they can let go of their old lives. When Anna picks up Molly, a trafficked teen who was brutally murdered, she contacts Molly’s grandfather, a former detective, for help. To say Anna has an uphill battle convincing him that Molly is residing in Anna’s head would be an understatement. Together with friends of Molly’s, Anna and her best friend, Deo, try to help Molly get the closure she needs, only to realize they’ve stumbled into something huge that might have roots all the way at the highest levels of the government.

Plot
The story is well-plotted, but takes longer to get going than I would have liked. It’s definitely an intriguing story, but there’s a lot of world building involved that is necessary to understand Anna’s situation and the world she lives in, but at times, it slows the story down. There is also far less romance than I like in my young adult novels. Which means this is perfect for anyone who thinks young adult has too much romance 🙂

Characters
Anna is a fascinating character. I had a difficult time warming up to her, though. While I understand why she’s so distrustful and standoffish, it made it difficult to identify with her. Still, she’s intriguing with one of the best backstories I’ve read in awhile. I loved the rest of the characters as well, all are so well-developed they jump off the page. Everyone from Deo to Aaron, Sam, and even Daniel are living, breathing characters that drive the story as much as Anna.

What Didn’t Work for Me
1. The pacing. It was slow at times, almost too slow.

2. The ending. I realize it’s the first book of a trilogy, but it was still too much of a cliffhanger for me.

3. The cover. It doesn’t really do anything for me. It didn’t grab my eye at all, but the author’s name sure did, and the description sold it.

What I Enjoyed About The Delphi Effect
1. The world building. True perfection!

2. Deo. He’s anything but stereotypical as the gender-questioning best friend.

3. The plot. Unique. And that’s about all I can say without giving anything away 🙂

4. Aaron. He’s amazing as the guy, with a secret of his own, who swoops in to help Anna and Deo.

5. Conspiracies. I adore a good conspiracy, particularly one with ties to the U.S. government. This was my favorite aspect of the story!

Bottom Line
The Delphi Effect is a fascinating paranormal/scifi/mystery/thriller for young adults. About the Author
Rysa Walker is the author of the bestselling CHRONOS Files series. Timebound, the first book in the series, was the Young Adult and Grand Prize winner of the 2013 Amazon Breakthrough Novel Award. Rysa grew up on a cattle ranch in the South, where she was a voracious reader. On the rare occasions when she gained control of the television, she watched Star Trek and imagined living in the future, on distant planets, or at least in a town big enough to have a stoplight. She currently lives in North Carolina, where she is working on the next installment in The Delphi Trilogy. If you see her on social media, please tell her to get back to her Writing Cave.