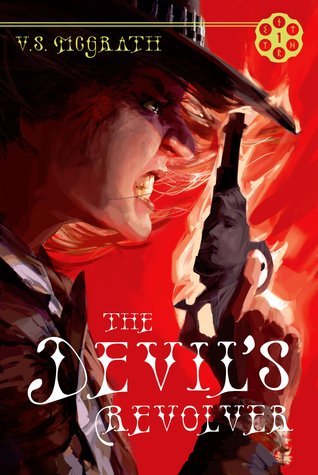 THE DEVIL’S REVOLVER (The Devil’s Revolver #1) by V. S. McGrath

Synopsis
She is Hettie Alabama — unlikely, scarred, single-minded, and blood bound to a revolver forged by a demon.

The first book in an epic, magic-clad series featuring the Wild West reimagined as a crosscultural stereoscope of interdimensional magic and hardship, The Devil’s Revolver opens with a shooting competition and takes off across the landscape after a brutal double murder and kidnapping — to which revenge is the only answer. Hettie Alabama, only seventeen years old, leads her crew of underdogs with her father’s cursed revolver, magicked to take a year off her life each time she fires it. It’s no way for a ranch girl to grow up, but grow up she does, her scars and determination to rescue her vulnerable younger sister deepening with every year of life she loses.

A sweeping and high-stakes saga that gilds familiar Western adventure with powerful magic and panoramic fantasy, The Devil’s Revolver is the last word and the blackest hat in the Weird West.

My Review
I’m a huge fan of the SyFy show Wynonna Earp, so fresh off of a trip to Comic-Con this seemed like something right up my alley. I was not disappointed. This is one of the most unique books I’ve ever read. Set more than a hundred years ago in the old west, it follows the story of seventeen-year-old Hettie Alabama as first tragedy befalls her family, then she begins to discover dark secrets about them and herself. With her young sister missing, Hettie is convinced she’s alive and will do anything to get her back. Anything includes imprinting on the Devil’s Revolver, known as Diablo, a gun with an endless supply of ammunition, never needs to be reloaded, and oh yeah, every time Hettie kills someone with it, she grows another year older. Surrounded by a colorful cast of characters, Hettie attempts to stay one step ahead of those who want Diablo and remain alive long enough to find her younger sister, Abby. Beyond that, she has no plan, so when everything starts to fall apart, Hettie lurches one from ill-conceived idea to the next. Filled with magic, history, and a mix of cultures, this is one of my all-time favorite reads.

Plot
The plot centers around Hettie’s search for her missing sister, Abby. But there’s so much more going on. Dark family secrets, a band of ruthless gangsters hellbent on getting their hands on Diablo, Hettie’s recurrent sudden aging, the fight for survival, and more. The author does a masterful job of taking us into a can’t-win situation, only to find a way to just barely survive, then knock us back yet again. Every time I thought Hettie was finally close to getting what she wanted, V.S. McGrath would tear it away from her again.

The Characters
The characters are nearly as fascinating as the plot. Each one is unique, with complex backstories, vivid characterization, and fully-developed goals and motivations. Hettie is by far the star of the story, and she’s so thoroughly developed, she could carry the story on her own. But the people who surround her bring more than just support to their roles. Even those who only show up in a handful of scenes are just as detailed and vivid as the characters who accompany Hettie throughout her journey.

Top Five Things I Loved About THE DEVIL’S REVOLVER
1. Expert plotting. One of only a handful of books I’ve read this year that I couldn’t put down.

2. Magical elements. I’m not usually one for fantasy or paranormal, but the way the author wove these aspects into the story felt natural. Although the magical elements are a big  part of the story, I was still rooted in the natural world in a way a lot of fantasy doesn’t allow me to be.

3. Hettie. One of the all-time best fictional characters.

4. Diablo. The gun is nearly a character all its own and its powers drive some of the best plot points.

5. Scene setting. The author creates such vivid scenes, bringing the reader in with all five senses, I’ve no doubt this story will stick with me for a long time.

Bottom Line
One of my favorite books of 2018 with amazing characters, an exhilarating plot, and unique aspects that make it unlike anything I’ve read. 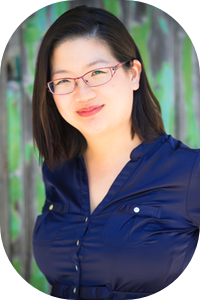 About the Author
Vicki So, writing as V. S. McGrath, is a published romance author (as Vicki Essex) and has six books with Harlequin Superromance: Her Son’s Hero (July 2011); Back to the Good Fortune Diner (January 2013), which was picked for the Smart Bitches Trashy Books Sizzling Book Club; In Her Corner (March 2014); A Recipe for Reunion (March 2015); Red Carpet Arrangement (January 2016); and Matinees with Miriam (November 2016). She lives in Toronto, Canada.