Young Adult Book Review – ON THE FENCE by Kasie West 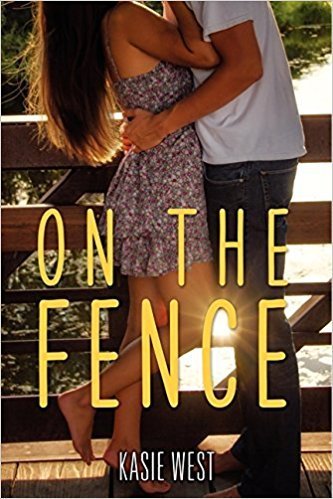 ON THE FENCE by Kasie West

Synopsis
For sixteen-year-old Charlotte Reynolds, aka Charlie, being raised by a single dad and three older brothers has its perks. She can outrun, outscore, and outwit every boy she knows—including her longtime neighbor and honorary fourth brother, Braden. But when it comes to being a girl, Charlie doesn’t know the first thing about anything. So when she starts working at chichi boutique to pay off a speeding ticket, she finds herself in a strange new world of makeup, lacy skirts, and BeDazzlers. Even stranger, she’s spending time with a boy who has never seen her tear it up in a pickup game.

To cope with the stress of faking her way through this new reality, Charlie seeks late-night refuge in her backyard, talking out her problems with Braden by the fence that separates them. But their Fence Chats can’t solve Charlie’s biggest problem: she’s falling for Braden. Hard. She knows what it means to go for the win, but if spilling her secret means losing him for good, the stakes just got too high.

My Review
An absolutely adorable tale of friends to more. Charlie is the only girl in a family of boys. Her police officer father and three older brothers have shaped her into a tough-talking athlete who is more comfortable hanging with the guys than with other girls. When Charlie speeds one too many times, her dad forces her to get a job to pay her own ticket, landing her in the unfamiliar world of fashion and makeup  with the free-spirited owner who sees auras. Charlie learns more about herself and those around here through these new experiences, but most of all, her best friend and next door neighbor, Braden. Braden and Charlie often meet by the fence that separates their two properties for middle of the night chats. Charlie is haunted by her mother’s tragic death ten years earlier and Braden by the constant battles that rage within the walls of his home.

Plot
This is more than a basic romance. Charlie and Braden both have a bucketload of baggage. But as their relationship evolves and Charlie realizes her feelings for him run deeper than just friendship, she fears the changes that come with that. At least until Braden lets her know he doesn’t feel the same way about her. Crush, Charlie works through her issues, a complex relationship with her dad and brothers, and her greater place in a world that worships femininity over athletic prowess.

The Characters
I love Charlie so much. She’s complex and deep and wounded. Watching her work through her issues is both painful and emotionally rewarding. Her family dynamics made me smile and laugh more than once. I come from a big family, so I could relate to the interactions she had with her siblings. I loved their competitiveness and the little bets they were always doing. Even Charlie’s dad, as the reluctant single father to a teen girl, is so well-developed, I couldn’t help but sympathize with his attempts to relate to Charlie the best he knew how.

Top Five Things I Loved About ON THE FENCE
1. Deep characters. There is nothing light and fluffy about the characters, even though the story itself is more lighthearted than not.

2. Teen angst. The romance aspect between Charlie and Braden was my favorite part of the story.

3. Brothers. I have a couple of my own and the bond between the boys and their baby sister was beautifully done.

4. Father/daughter dynamics. The relationship between Charlie and her father rang the truest of all. It was both awkward and endearing, pretty much the definition of father/teen daughter interactions.

5. Being true to yourself. Charlie has many lessons to learn along the way, but foremost is figuring out how she fits into the broader world around her without losing who she is. This subplot is particularly well done.

Bottom Line
Sweet, deep, and moving, ON THE FENCE is more than just a teen romance. It’s about finding yourself and learning how to be real.

About the Author
I write YA. I eat Junior Mints. Sometimes I go crazy and do both at the same time. My novels are: PIVOT POINT and its sequel SPLIT SECOND. And my contemporary novels: THE DISTANCE BETWEEN US, ON THE FENCE, THE FILL-IN BOYFRIEND, PS I LIKE YOU, and BY YOUR SIDE. My agent is the talented and funny Michelle Wolfson.