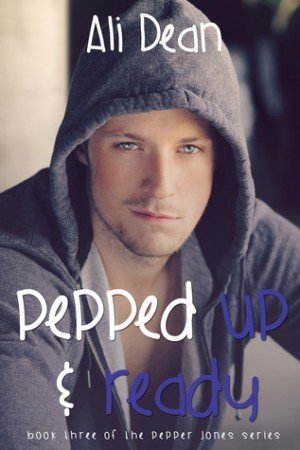 Pepped Up and Ready (Pepper Jones #3) by Ali Dean

Synopsis
This is the third book in the Pepper Jones series. The following description contains spoilers for Pepped Up and All Pepped Up. It is highly recommended that you read the books in order.)

Pepper is finally a senior, and she’s determined to defend her national cross-country title. Although Jace is busy with the demands of college football, he’s still at Pepper’s side, supporting her goals. But is she taking her renewed enthusiasm for training too far?

As Jace and Pepper focus on their athletic ambitions, they discover that Jace’s social status has followed him to college, despite his attempt to keep a low profile. With her boyfriend as an idol on campus, Pepper discovers that she might just be a target to those who find Jace threatening.

Are Jace and Pepper strong enough to withstand the pressure from those who want something from them? It won’t be easy fighting for her title and her boyfriend, but nothing easy is worth winning… or keeping.

My Review
I’m a huge fan of Pepper Jones and her creator, Ali Dean. This third book in the Pepper Jones series is a departure from the other two. Still focused on Pepper’s running career and her relationship with Jace, there’s less angst and more drama in other areas of Pepper’s life. Pepper has a lot to prove as the defending girls’ cross-country national champion, so she’s training harder than she ever has in her life. Wes is heading to an Ivy-league school soon, and Jace has moved to the dorms on campus, proving that the only constant is change.

What this iteration lacks in dripping teen angst now that Jace and Pepper seem to be on solid footing relationship-wise, it makes up for with uncertainty surrounding Pepper’s ability to compete with an injury and a mystery stalker that has Pepper living in fear.

Plot
The main plot is definitely about running. Whether or not Pepper will recover in time to compete, and if her recovery will be enough to allow her to qualify for regionals and nationals again. A solid sub-plot involves the mysterious stalker who is either trying to ruin Pepper’s chances at a repeat nationals title or to come between her and Jace. Where the story really excels is with Pepper’s running. Her inner turmoil is palpable. I could feel her fear, her drive, her panic over her future, over her identity, because if she’s not a runner, who is she?

There wasn’t nearly enough Jace/Pepper time though, but I think that was deliberate. With Jace in college and Pepper still in high school, their haphazard time together was authentic. They were always trying to squeeze in time for each other while juggling the rest of their busy lives, and the choppy nature of their time together was mirrored in the writing. I felt as unsettled and rushed reading about those stolen moments as the characters were feeling, experiencing them.

Characters
I love all the character growth in this latest installment. Pepper is maturing, learning to stand up for herself. Jace is settling down, giving up his partying ways, and even Zoe is coming out of her over-protective-parenting shell and hanging with the party crowd. Even little Jenny Mendoza, now a sophomore, is finding her voice. But better still, they all stay true to themselves. Even though they’re growing up, they’re still the same characters we know and love.

Writing
There is a more mature tone to the writing in this book than in the previous two and I think that reflects the maturation of the characters between the pages. Pepper spends a lot more time inside her head, processing. There are a few times this introspection slows the pacing, but not horribly so. The one thing I would have liked a little different is a particularly long-awaited moment between Pepper and Jace. It would have been nice to be inside Pepper’s head a little more, got a deeper understanding of how much it meant to her. We’d been building up to it for two books and I almost felt it was rushed.

Ending
The ending was satisfying, wrapping up the main plot points from this story, but still left me excited to find out what’s next for Pepper Jones.

Top Five Things I love about Pepped Up and Ready to Go:
1. Pepper’s Determination. Her commitment to her sport, her grit and determination, are role-model-worthy.

3. Jace’s Loyalty. He’d do anything for Pepper and that is evident in everything he says and does. Sure, he has a storied past, but it’s all in the past. He’s stepped up and becomes the boyfriend Pepper deserves.

4. The Running. Reading about Pepper out there pounding the pavement, getting lost inside herself, has me itching to lace up my running shoes again.

5. Ryan. Still a big fan of the boy Pepper let go to be with Jace. I’d love for him to find his happy-ever-after.

Bottom Line
Pepped Up and Ready to Go reunites my favorite young adult characters in a story that challenges them in new, and in some cases, more intense ways.

About the Author
Ali Dean lives in Colorado with her husband, twin babies, and golden retriever. In addition to reading and writing, she loves the outdoors- everything from marathon training and biking to snowboarding and skiing.