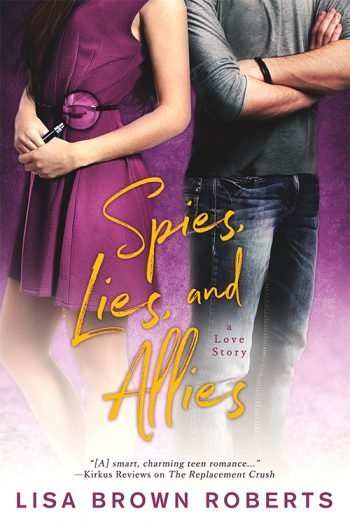 Synopsis
Summers are supposed to be fun, right? Not mine. I’ve got a job at my dad’s company, which is sponsoring a college scholarship competition. I just found out that, in addition to my job assisting the competing interns, I’m supposed to vote for the winner. Totally not what I signed up for.

There’s a crazy guy running the competition like it’s an episode of Survivor. Then there’s Carlos, who is, well, very distracting – in a good way. But I can’t even think about him that way because Crazy Guy says any fraternizing on the job means instant disqualification for the intern involved.

As if that’s not enough, an anonymous weirdo with insider intel is trying to sabotage my dad’s company on social media…and I’m afraid it’s working.

Much as I’d love to quit, I can’t. Kristoffs Never Quit is our family motto. I just hope there’s more than one survivor by the end of this summer..

My Review
I love this book! Seriously, freaking LOVE! I’m a huge Lisa Brown Roberts fan and had the distinct pleasure of being her “seat filler” for all of five minutes at the RWA conference in San Diego a few years back; coincidentally, just a few days before San Diego Comic-Con. And though I’m sure she’s quite a bit younger than me, I still say I want to be LBR when I grow up. And SPIES, LIES, AND ALLIES is the reason why. The banter, the characters, the pop culture tie-ins. This story is pretty much everything I love: young adult romance, teen angst, Star Wars, nerd geekery, pop-culture references, Comic-Con… Yeah, if I was a teen in 2018, this would pretty much be my life.

The summer before her senior year of high school, Laurel convinces her dad to allow her to work at his public relations and marketing firm so she can spend more time with him. She calls him Dad Vader, and at first I was worried this was due to a fractured relationship. But other than her father working a lot, the reference is to a mutual love of Star Wars and a time he dressed as Darth Vader to her Princess Leia. Initially excited, Laurel soon realizes this may not be the summer she was hoping for. Instead of sharing leisurely lunches with her dad, she barely sees him other than the commutes to and from work. And on top of that, she’s expected to report back on a group of interns who are all vying for a $100,000 college scholarship in a reality-TV-show inspired competition. Not only does she not want to spy on her contemporaries, but one of whom just happens to be Josh, the dreamy high school quarterback she’s been pining for since middle school.

It isn’t Jason, though, who gets her worked up. Instead Carlos, the boy with the Hershey Kiss colored eyes sets her pulse zinging. The “no-fraternizing with the interns” rule makes both boys completely off limits for Laurel, who soon finds her attention focused on discovering the culprit using social media to sabotage her father’s company. Before summer is over, Laurel will learn a lot about first impressions, what it means to really trust someone, and the power of persuasion.

Plot
The main plot is definitely the romance, but there are a lot of great subplots involving Laurel’s relationship with her father, her friendships with the other interns, and the mystery of who is trying to hurt the company. All are woven expertly together. The constant sprinkling of pop-culture references also played into the plot, including a Breakfast Club-esque scene in the building’s basement. My only real complaint with the story, and it’s not even so much of a complaint, is that the mystery was introduced with only one likely culprit. Even though the story isn’t primarily, or even secondarily, a mystery, once that element was introduced, I would have liked a little more to it.

The Characters
The characters are the best! Laurel is fantastic as the adorable teen nerd who loves Star Wars and refers to her dad’s right-hand-man, Mr. Mantoni, as “the Manicotti.” She’s confident, but with a reasonable number of insecurities which keep her grounded and utterly relatable.

2. Carlos. He’s witty and loyal and easy to love. Being insanely attractive doesn’t hurt either.

3. Star Wars. I’m a full on Star Wars geek, and like Laurel, I believe any movies with Jar-Jar Binks don’t really count. I like to pretend those were never even made. I adore the way the author wove in so many Star Wars references and compared their mission to blowing up the Death Star.

4. New friends. I love the whole Breakfast Club feel of the interns’ relationships with one another and how they evolve over the summer.

5. Standing up for what’s right. Laurel repeatedly risks her job and her relationship with her dad to do what she feels is the right thing; consequences be damned.

Bottom Line
Another fantastic LBR book that I couldn’t put down!

About the Author
Lisa Brown Roberts still hasn’t recovered from the teenage trauma of nearly tweezing off both eyebrows and having to pencil them in for an entire school year.

This and other angst-filled memories inspire her to write YA books about navigating life’s painful and funny dramas, and falling in love along the way.

Her almost forever home is Colorado, though she occasionally pines for the days when she lived within walking distance of the Pacific Ocean. Her house is full of books, boys, several fourlegged prima donnas, and lots of laughter.