Welcome to the book blitz for BASICS OF SPELLCRAFT, the first book in the young adult urban fantasy series, Ember Academy for Young Witches, by L.C. Mawson. See below for information on the book, preorder links, an exclusive excerpt, and details on her giveaway. 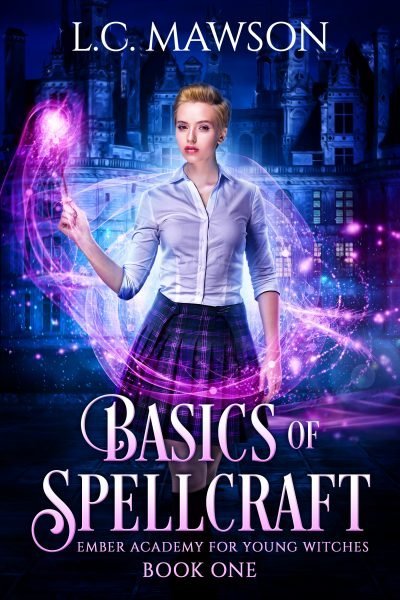 Synopsis
Ancient curses. Blocked memories. And an Academy for young witches that might just hold the answers.

I should have known something was wrong when my weird aunt arrived in town just as I started getting killer headaches. But how was I supposed to know that it was a sign of repressed magic? Or that an ancient witch had escaped her tomb and sent demons after me?

Demons who cursed my mother.

I wanted to stay with her, even if she wouldn’t wake, but I was sent to Ember Academy for Young Witches instead. Somewhere the demons hopefully can’t get me. I need to find a way to lift the curse, but there’s a block on both my magic and memories that everyone is refusing to lift.

A block that might hold the answers as to why an ancient witch is after me in the first place. If I can figure her out, maybe I can figure out this curse. My teachers don’t want me digging into it, worried about the danger.

But I don’t care.

My mother was cursed because of me, and I’m not going to rest until she’s safe again.

Excerpt #3
Dad stayed at the hospital with Mum, so it was just me and my auntie.

“Go on, get some rest,” she said, nodding to my bed as we entered my room. “I’ll try to be quiet as I pack up your things.”

“All of my things?” I asked as I kicked off my boots and pulled my bra out from under my shirt, before getting into bed in my shirt and jeans.

“I’ll take all of your clothes, so you’re not left without choice on the weekends, though there is a uniform through the week. And then I’ll bring your make-up, tablet, medication and laptop, along with chargers, headphones, and other bits. If you’ve got your phone and purse in your handbag, that should cover everything you’ll need. Unless you can think of anything else.”

My hand reached under my covers and found the old, worn toy rabbit that I’d had since I was a child. Mr Fluffy. It seemed silly to ask to pack him – I was sixteen, and I doubted the other kids at Ember would be kind about me still having a soft toy – but still, I clutched him to my chest, feeling a little better for his presence.

To my surprise, Auntie Jess made her way over, smiling and leaning over to gently stroke where the rabbit’s ears popped out from the top of the covers.

“Charm?” I asked, my voice a little muffled from my cheek being pressed into my pillow.

“I spelled the rabbit with a soothing charm when you were little. Though, I doubted it would have lasted this long with just my magic. Maybe your sister-” She cut herself off, as if realising what she had just said.

I frowned. “What sister? Dad said before that he couldn’t lose ‘another’ daughter. What did he mean? Does it have something to do with why we were attacked tonight? They were after me, weren’t they?” As I spoke, another headache formed, the burning behind my eyes getting worse with each word that left my lips. But I couldn’t stop. Not until I had answers.

My frown deepened at the random question. “Killing. Why?”

“Because your father wasn’t the only one who had his memories tampered with.”

“Then untamper them.” My words had a little more bite than intended but I couldn’t bring myself to care. “If you took the memories, then surely you can give them back. Dad got his back.”

“I wasn’t the one to take your memories, Amy. And ‘taken’ isn’t really what happened, anyway. A block was placed on both your memories and your magic. The former was intentional, but the latter… Well, intentional or not, it gave you longer than most to have a normal childhood.

“Regardless, I don’t think I need to remove the block. You’ve been fighting it for the past few months, which is why I moved back here and why you’ve been getting the headaches. And why I’ve been pushing you to go to Ember Academy. Gail knows more about this kind of magic than me, so she can take a look in the morning and see if she can help.”

I nodded, holding Mr Fluffy tighter. “You didn’t answer any of my questions.”

“No, I didn’t. I think answering them will weaken the block further, and I don’t want to risk that until Gail has had a chance to have a look.”

I nodded, having to admit that I didn’t want her to mess with something in my head until we were sure it was safe, despite my need to understand.

Despite the fact that people kept referring to a sister that I couldn’t remember.

Who was she? Where was she now? Did she have magic like me?

Even just thinking the questions caused my vision to swim with pain.

Right. The more I pushed the block on my memories, the worse the headaches would get.

Still, there was one question I couldn’t let go.

“But those attackers, they were there for me, weren’t they?” 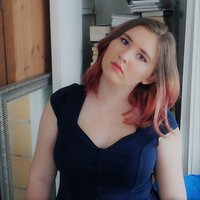 About the Author
Some say she’s an ancient creature of nightmare that was unleashed from beneath the ocean, come to devour the souls of men. Others say that she’s a cosmic being from the beyond the stars that has taken corporeal form to learn our ways for some unknown end…

In truth, L.C. Mawson lives in a tower in the middle of a haunted forest, far from civilisation and is definitely (probably?) not a witch who curses those who trespass upon her land. And she definitely cannot turn into a dragon that flies over cities in the dead of night and whose cries are often mistaken for an approaching storm. Where did you hear that? That’s absurd…

The only contact she has with humanity is publishing a book once a month, which is definitely just for fun and not part of an ancient contract with a trickster god..