Welcome to the blog tour for APOCALYPSE 5, the first book in the young adult science fiction series, Archive of the Fives, by Stacey Roarke. See below for information on the book, buy links, an exclusive excerpt, and details on her giveaway. 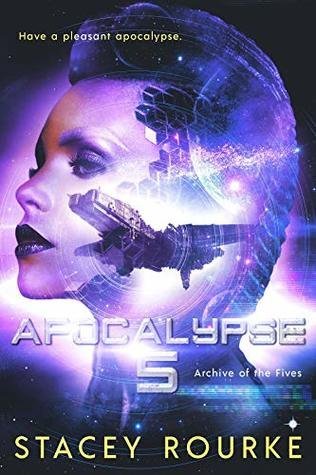 APOCALYPSE FIVE (Archive of the Fives #1) by Stacey Rourke

Synopsis
Good luck and have a pleasant apocalypse.

The end of the world is coming. How or when, scientists can’t agree upon. For decades, Earth’s best line of defense has been a team of young soldiers known as the Apocalypse Five, forced into virtual reality simulations to train for Doom’s Day. But, this is no game. Death on the grid is brutally final and calls up the next in a long line of cadets.

Stationed aboard the AT-1-NS Starship, the A5 are celebrities thrust into the limelight by a calling they didn’t choose. All it takes is one unscheduled mission, showing seventeen-year-old team leader Detroit a harsh and unfathomable reality, to shake the A5’s belief in all they thought they knew. After questioning people with the power to destroy them, the team is framed for a crime they didn’t commit and marked for death. Now, the hunt is on.

Can the Apocalypse Five expose the truth the starship would kill to keep hidden? Or, will their bravery end in a public execution?

Excerpt #3
Lansing’s lightning-fast fingers clicked over the keys, typing the programming coordinates handed down to her from the designers into the simulator. With her digital eyes transfixed on the screen, the Undertaker’s tone was even more monotone than usual as she read back the data presented. “Solo mission constructed by designer DB3245. No added weaponry. Countdown begins in T minus three minutes. Team Member Detroit should be suited up and beginning pod safety protocols.”

After zipping up her Lycra bodysuit, Detroit kissed the lucky piece of flint—a souvenir from her first mission—that dangled from a silver chain around her neck. Hands on the edge of the pod, she heaved herself into her well-traveled chariot for one. “Team Member Detroit is suited up and initiating countdown protocol,” she confirmed. Acting primarily on muscle memory, she typed in the same codes she had countless times before. “So, a solo mission, huh? Apparently, I have a problem area that needs work.”

“Respiratory functions will be online in 3 … 2 … 1.” A click and steady hum punctuated Lansing’s statement, announcing the activation of Detroit’s oxygen filtration system. “I have no prior knowledge of the reasoning behind this chosen mission. It could be preparing you for a worst-case scenario of every one of your teammates being exterminated. Or, it could be punishment for scheduling an unscheduled press conference and then failing to appear.” Only then did Lansing’s head jerk Detroit’s way with a robotic twitch. “My apologies. That was one of those moments, wasn’t it? The kind you hate when I fail to utilize my human emotion programming and come across as a—”

“A robot slag?” Detroit finished for her, taking a hit off her oxygen tank just to make sure Augusta’s issue wouldn’t be repeated. Finding it in working order, she let the mask fall to her chest until needed. “It’s a character flaw I’ve learned to love you in spite of. That said, there’s no need to sugarcoat the solo gig. I’m being put in an A-5 timeout until I learn from my mistakes … whatever the designers feel they may be.”

Robotic gears whirring, Lansing gave a confirming nod and returned her attentions to the computer screen. “You’re in a timeout, and I’m an emotionless robot. Remind me how it was we found ourselves in the lead position of the Apocalypse Five?”

“Far as I can tell?” Detroit tucked one arm, then the other, under her safety harness and buckled it into place. “It’s either my sparkling personality, or your stellar tits.”

“The curve of my breastplate is metal and completely ornamental.”

“So is my personality. That can’t be it, then.”

“Never forget: We are alive within mysteries. Wendell Berry.” Lansing’s expression softened to the closest she came to a smile. “Return trajectory routed and programmed for autopilot. According to my calculations, there is no evidence of yesterday’s problematic situation repeating.”

The pod was beginning to close, but Detroit’s hand darted out to stop it. She could feel her face instantly bloom a bright tomato-red, and her shocked squawk landed a few octaves higher than anything resembling normal. “Situation? There was no situation. Why would you think there was a situation?”

Lansing glanced up with her head tilted in confusion, her hands hovering over the keys. “Because Augusta’s breathing apparatus malfunctioned. Some may consider that potential threat of fatality a bothersome turn of events.”

“Oh, that.” Retracting her hand, Detroit settled back into her seat and silently cursed her lack of composure under the slightest questioning. “Yeah, that simple glitch could have ended much worse. Lucky thing we got him out of there in time.”

“I concur,” Lansing seconded. “Pod lid closing … if you allow it to this time. Kindly don’t die out there, or I’ll be melted down and sold for parts.”

“You would make a handsome bar stool, or maybe some form of abstract art. But, I’ll do my best,” Detroit lobbed back before the lid slid into place and sealed with a click.

Others might have considered their sign-off dismissive. To Detroit and Lansing, it was the equivalent of a hug. Okay, maybe not that cozy. More like a handshake of solidarity, signifying neither wanted the other dead or repurposed.

“Weapons system, online.” Detroit rattled off her readouts as she fixed her oxygen mask into place. “All sequences are go. I am ready for the sweet serenade of my robot mistress.”

“And there she is.” Detroit sucked air through her teeth, biting her lip in pantomimed desire. “She sounds saucy tonight. What do you think she’s wearing?”

The crackle in their connection prompted Detroit to try another frequency for safe measure. “Yes, ma’am. I got a little static on the line. Can you hear that?”

“Today’s mission will be a solo one,” the robotic recording continued. “The target, as always, is to prevent any major catastrophes, with minimal casualties. Good luck and have a pleasant apocalypse.”

Lansing’s attempt at a response was little more than a series of crackles, pops, and hisses.

“I’ve got no sound in here,” Detroit grumbled as the thrusters engaged and flung her against her seat. “Good thing I’m not going solo into this mission, or that would be downright disturbing … oh, wait.”

Filling her lungs with a steadying breath, Detroit ticked through the protocols for faulty system scenarios, trying not to link this critical error with Auggie’s. There was the chance this was intended to be a system failure simulation. If that was the case, whatever lesson the designers felt they needed to teach her meant getting back to basics.

Fighting against the inertia pinning her to her seat, Detroit completed a final systems check. “Everything else is functioning properly. I just don’t have ears. If you can hear me, Lansing, keep an eye on the calibrations on return. You’re going to have to make them as needed. I’ll be no help making adjustments.”

Clicking her earpiece off to spare herself its haunting hiss, Detroit let her head fall back and closed her eyes. “If this is a slap on the wrist for something, there had to be a less ominous way to do it,” she muttered to the stifling silence. 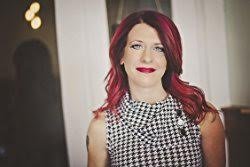 About the Author
Stacey Rourke is the author of the award winning YA Gryphon Series, the chillingly suspenseful Legends Saga, and the romantic comedy Reel Romance Series. She lives in Michigan with her husband, two beautiful daughters, and two giant dogs. She loves to travel, has an unhealthy shoe addiction, and considers herself blessed to make a career out of talking to the imaginary people that live in her head.