Welcome to the blog tour for HITMAN WEDDING, the fourth book in the adult contemporary romance/romantic suspense series, Bad Boy, Inc., by New York Times bestselling author, Eve Langlais. See below for information on the book and series, buy links, an exclusive excerpt, and details on her giveaway. 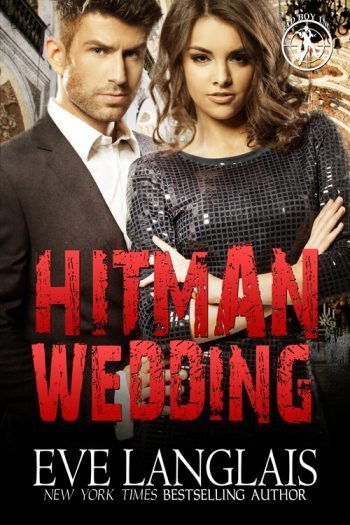 Synopsis
The employees of Bad Boy Inc. are gathering for a celebration. The bride sported the latest in bullet proof corsets. The groom wore a gun. The guests came armed for action. But the cake blew up before they could eat it. As for the honeymoon, it’s going to be a mad chase across the globe dodging bullets and bombs to find the culprit who wants them all dead.

Once upon a time, Darren fell for a woman while in the world’s most romantic city. In full view of the Eiffel tower he had his heart torn from his chest and stomped on.

Time for revenge. Francesca played Darren for a fool, but he won’t let it happen again. Now that he’s found her, she’s going to pay for her actions. Problem is she’s getting under his skin. Rubbing against his skin. Making him remember those Paris days and hotter nights.

Before he can decide if he’s crazy enough to fall in love with her again, everything explodes after the wedding.
.

Excerpt #2
Daren heard the whisper of steps. He didn’t turn, playing the hapless victim for a woman who’d admitted to her Russian spy upbringing and killer nature.

A woman who couldn’t bring herself to eliminate me, not in Paris or on the rooftop patio on the island.

For some reason, he kept returning to that one glaring fact. She could have murdered him, many times over. Could have, but instead, she’d allowed him to take her prisoner.

Why? That was the one thing he couldn’t figure out. Killers didn’t get cold feet. They couldn’t hesitate or show mercy because they never knew if the one that got away would be the one to put a bullet between their eyes.

A knife didn’t materialize between his shoulder blades, and he didn’t get shoved into the big blue sea. She let him live, which meant she wanted something from him.

Does she want me? He really had to stop with the foolish flights of fancy.

Daren turned to face her. She looked fetching despite her disheveled appearance, her clothes wilted from the rain they’d encountered on the way to the yacht. Navigating the floating dock with her over a shoulder as it heaved with each angry swell had proven interesting.

“Yes. I managed to get a message out.” When people started dying, he’d decided it was time to get himself and his team off that island. The boat had arrived and docked as the storm hit. Darren ended up boarding it without his team. He left them to clean up the mess so he could deal with Fran on his own.

“Is that the coast?” She pointed at a dark line on the horizon.

“I would, but I feel like I should mention that there are sharks in these waters.” He stared pointedly at her.

She rolled her eyes. “Are you really going to whine about my job again? Kind of hypocritical since your school provides the same kind of training.”

“We’re not the same.” He heard the defensive, angry note in his statement.

“We are. My being Russian doesn’t make it any better or worse. We just work for opposing sides. Why not admit that the real reason you’re upset is because you never once caught on?”

He hadn’t. How could he have been so blind. “I’m not upset.”

“Liar. Anyone can see you are bothered by the fact I’m an agent. Or is it because you were bested by a woman?”

“That’s where you’re wrong. The woman I know have always been more dangerous than the men.” 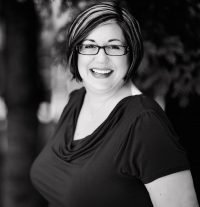 About the Author
New York Times and USA Today Bestseller Eve Langlais is a Canadian author who loves to write hot romance. She likes to blame her twisted imagination for her sarcastic sense of humor which tends to heavily influence her stories. She loves to write, and while she might not always know what her mind is going to come up with next, she does promise it will be fun, probably humorous and most of all romantic, because she believes in a happily ever after.