Welcome to the blog tour for KEYSTONE, a standalone young adult scifi romance series, by Katie Delahanty. See below for information on the book, buy links, an exclusive excerpt, and details on her giveaway. 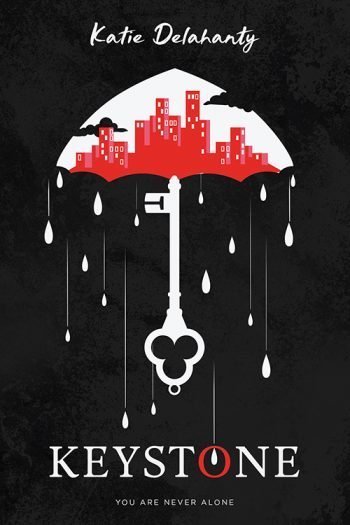 Synopsis
When Ella Karman debuts on the Social Stock Exchange, she finds out life as a high profile “Influencer” isn’t what she expected. Everyone around her is consumed by their rankings, in creating the smoke and mirrors that make them the envy of the world.

But then Ella’s best friend betrays her, her rankings tank, and she loses—everything.

Leaving her old life behind, she joins Keystone, a secret school for thieves, where students are trained to seal everything analog and original because something—or someone—is changing history to suit their needs.

Partnered with the annoyingly hot—and utterly impossible—Garrett Alexander, who has plenty of his own secrets, Ella is forced to return to the Influencer world, while unraveling a conspiracy that began decades ago.

Excerpt #3
A reaction that existed before this time where knowledge rules and skill declines. Truth uncovered, recharged, raved, then buried in greed to protect fame. Taken from the hedonistic night; it is a giver of light. Break the world, make it shine, and take your place among the divine.

Slamming down my pencil, I read the riddle again. And again.

I run through the possibilities I know exist in the vault: The Louvre… Museo Nacional de Antropología… Hmmm… Maybe something from ancient times? The Antikythera mechanism, one of the earliest analog computers, is in the National Archaeological Museum of Athens… Maybe I should start there? I concentrate, waiting for something to click, and come up empty. All the while the clock is ticking. At least I’m not alone. Sneaking a glance at Garrett with his head bowed over his cipher, a strand of hair falling across his forehead, I take consolation in the fact that he hasn’t figured it out, either.

Drawn to him, I take advantage of his closeness—and rare silence. Tracing his strong jaw and full lips, I feel heat build in my center. He’s perfect. As if he hears my thoughts, his eyes snap up, connecting with mine. They seem darker today, the usual gray-green reading charcoal. Rimmed with kohl to disguise their symmetry, they are like black holes, sucking me in, bending the light in the room, and I sit frozen, heart pounding, unable to look away.

I blink myself back into reality, and I’ve got it. Babylon. Symbolic of all that’s evil in the Bible, awaiting her fall in Revelation… The answer is the Babylon Battery. The history lesson comes flooding back. Also known as the Baghdad Battery, it’s an ancient jar containing what was identified as an electric cell, dating back thousands of years before Alessandro Volta took credit for inventing the battery. It was looted from the National Museum of Iraq when the U.S. invaded in 2003, and then was later stolen by a Keystone alumnus and donated to the Vault. It now resides in the Pyramid. If only I can get there first… It’s clear on the other side of the Vault, and I don’t know how to get there from here, having only stumbled upon it once by accident.

A slow smile spreads across Garrett’s face. “Welcome back. You’re cute when you’re analyzing, but be careful not to chew that pretty lip until it bleeds.”

My stomach drops, but I refuse to let him distract me.

“What’s this?” he asks, touching the tiger’s eye I wear at my throat. “Good luck charm?”

“I don’t need luck.” Making sure my glare is received, I leap out of my seat and rush to the door. Unfortunately, I’m no match for his longer strides, and he catches me, snaking his arm around my shoulders just as I’m about to exit.

“Fair enough,” he says. “Do you want to walk over there together?”

“Do you know where we’re supposed to be going?” I stare up at him, my head tucked perfectly against his shoulder. Holding my breath, I resist inhaling his spicy scent.

He laughs. “I think so, but just in case, why don’t you tell me where you’re going?” 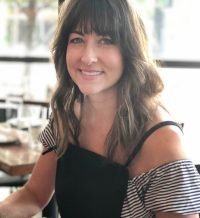 About the Author
Katie lives in Los Angeles with her husband, twin daughters, and son. Growing up in Pittsburgh, she loved old movies and playing dress up, but never considered telling stories of her own until she was asked to start a blog for the sleepwear company she worked for. Unsure what to say about lingerie, she wrote a fictional serial about a girl chasing her costume design dreams who fell in love with a rock star along the way. And that’s when Katie fell in love with storytelling. That blog became The Brightside Series and she’s been waking before dawn to write ever since..