Welcome to the blog tour for RASH DECISIONS, a stand-alone new adult contemporary romance, by Alex Rosa. See below for information on the book, buy links, an exclusive excerpt, and details on her giveaway.

Synopsis
Julia Ferris had it all. A loving a boyfriend, a glamorous city, and a high paying job. What more could a girl want? She’d ask you, “What if all those things weren’t what you wanted … ever?”

Julia’s life has always been defined by everyone around her, but one day she makes the rash decision to finally live life for herself, and it all starts with a pair of shoes. Now it becomes her only guide.

From new jobs, to new boys, and a life in a big city she was never prepared for, she can at least admit one thing now:

It’s all exactly what she wants … kind of. 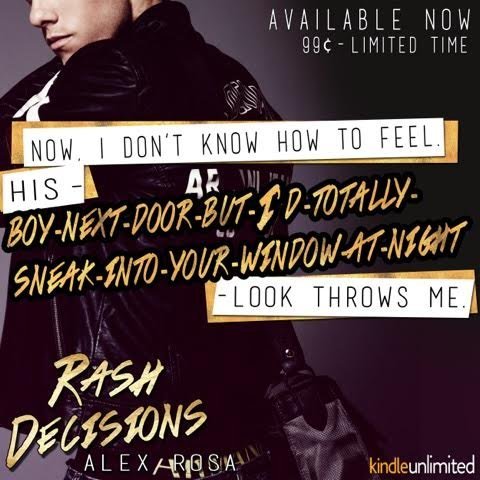 I shake my head, scrunching my eyes and rubbing my temples. Which are all things that mean I am not okay, so I try and stop and open my eyes, except I should have kept them shut because Troy’s eyes are glowing, round, and adorable, caring even.

He nods, but it’s another moment where I can tell he doesn’t believe me. He shifts his inquisitive stare down to my desk and extends his arm out, his long fingers sliding the layout design from under my pile of budgets.

Without looking up he asks, “Is this the revised version we discussed?”

“Thanks for moving the hallway entryway. I know you wanted to accommodate the corner booths, but in a way, I like that the design has flipped where they’re on the other side. What if we moved the raised VIP level over here, too?”

I love watching Troy work. Somehow we have managed a flawless working routine after our midnight pow-wow. He’s calculated and methodical. His piercing eyes, for once, are not on me, but on my graph paper, measuring for errors and design.

“Where?” I ask as I stand and move around my desk to stand next him.

I lean over the design, and shake my head. “We can’t. If you want the media area to be more prime and centrally located it needs to be there. Plus, I have a plan for a lounge area right in front. The only thing I can suggest is to switch the place of the bar with the VIP section, but then we have to battle for plumbing and all that. It’s an old building from the 1920’s. We have to at least attempt to be gentle with it.”

He snickers. I look up from the paper and his eyes are already on me. He’s much closer than I realized. I hold my breath.

“Nothing. The way you talk about the integrity of the building, it’s just …”

He stands up straighter, no longer concerned with the piece of paper. He towers over me. I have the sudden urge to tug on his tie and I don’t even have an ounce of liquor in me.

My lips squirm, trying to find a way to wrap around words, but they fail because the temperature in the room has just skyrocketed, and I’m more embarrassed by the burning blush on my cheeks.

He licks over his bottom lip, his eyes darting all over my face again, and that damn smirk seems like he’s privy to his own joke, but I catch his eyes falling on my mouth every time.

I release the breath I was holding and he has the nerve to chuckle.

“There are many versions of Julia that I’m getting to know, and, unfortunately, downright adorable is one,” he pauses chewing the inside of his cheek, as if treading cautiously but decides to go for it as he adds, “sexy as hell is another, and sometimes you’re just surprisingly agreeable and almost friendly.”

There’s no stopping my grin, and I want to hate myself for it, but it feels too good as it stretches across my face.

His eyes fall back onto my mouth, and without hesitating he says, “I’m trying really hard to be a gentleman, you know that?”

“This is your version of a gentleman?”

He sucks in a breath, “I said I was trying. I’m showing some serious restraint here. I deserve a medal or something.”

When I giggle, his eyes fling themselves back to my eyes.

“What do you mean?” I ask, knowing this is me walking straight into quicksand.

“You know what I mean, Jules.” He leans in a little bit closer.

Two days of normality and this is how long we’ve lasted.

As if impatient and battling himself he speaks; his eyes etching themselves with a look of pain. “Do you have any idea how much I want to kiss you?”

With my heartbeat sounding off like a rapid bass drum in my ears I reply, “I think I have some idea.” 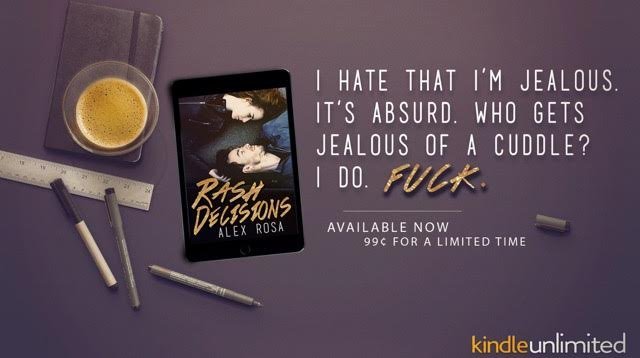 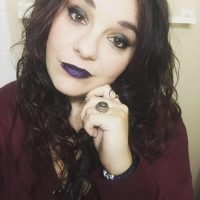 About the Author
Alex Rosa lives in San Diego, California. When she isn’t scouring city parks or cafe’s to write she is more than likely trying to convince her friends to join her on her next adventure. A sufferer of wanderlust, she is always looking for a new mountain to climb, a canyon to hike, or a plane to board. Her resume consists of coroner, to working at a zoo, and most recently as an executive assistant, but finds her home amongst words, whether it be in books, or in film. Her obsessions are on the brink of bizarre, but that’s just the way she likes it.
.