Welcome to the blog tour for SPECULAR, the first  book in the young adult science fiction/superhero adventure series, IXI Comics, by L.K. Brooks-Simpson. See below for information on the book, buy links, an exclusive excerpt, and details on his giveaway. 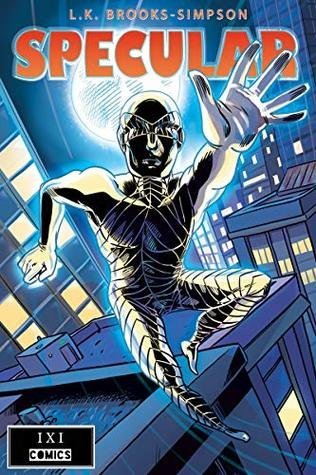 Synopsis
The first installment of the IXI COMICS series by author L.K BROOKS-SIMPSON

This novel is of the fantasy/superhero fiction genre and tackles some important implications of mental health and Dissociative Identity Disorder (DID).

Imagine being afraid to fall asleep in fear that you will not wake up to the life you know. This is exactly what Tre Moon experienced at nine years old. He awakes to his second dissociative identity having set his house aflame. With his home ruined and his parents murdered at his own hands, he is sentenced to trial for a life sentence. Young Tre Moon is forced to walk a path that will change his life forever.

When seventeen year old Tre comes into contact with a prohibited substance called Colloidal Supersilver his life will change forever when he finds out he has the ability to change how light refracts from his body. His new powers come with new challenges to an already complicated life, having battled Dissociative Identity Disorder for the majority of his youth.

Follow the origin story of IXI COMICS first hero as he becomes Indiana’s newest vigilante, Specular! In a city full of crime, recession, drug underlords and other mysterious vigilante’s, the legend of Tre Moon will unfold, all the while, his dark past tries to catch up with him…

Excerpt #1
Word of the murder of Natalie and Cecil Moon quickly went around the city of Signot, Indiana. Word started in the Hive Borough, where the Moon residence was situated, and continued to the outer reaches of the huge city. Inevitably, word of the incident also reached local news, then the legal system. With no lawyer, witness or irrefutable evidence to defend him, in June of the year 2003, Tre Moon was convicted of murder on two counts and given a mandatory life sentence. He was to serve his sentence in Signot’s Juvenile Detention Centre until he was eighteen years of age. When he became of age he was to be transferred to Hallows Island; an isolated, maximum security prison for America’s worst offenders. At the age of nine Tre had everything taken away from him. His mother. His father. His best friend. His home. His hopes. His freedom. His innocence.

Throughout all his loss, one thing did remain however, the voice inside of his head. The voice provided him with constant company during the first year of his sentence, a feature that he reckoned, ironically, kept him from falling further into insanity. Besides, he knew for a fact that no one else inside the detention facility had an ominous counsel or a savage alias to handle the rough aspects of Juvenile Hall. And it got very rough. During the first five years of his sentence, Tre became very familiar with the offenders’ lifestyle. On any day he was liable to see: fistfights followed by revenge in the form of knives formed of whatever abrasive material one could find. Gym practice and betting championships with all types of tactics and juvenile algorithms employed to get the advantage. Religious sessions and prep talks were held in improvised lecture halls. Readings and plea deals, which led to weaklings, robbed of their free meals. Tre Moon was not like the offenders around him and so he tried to keep to himself, however he found it increasingly hard to do this. His reputation as a cold murderer preceded him and ego grown individuals began to pick fights with him to establish the pecking order. The aphorism ‘you are a product of your environment’ proved to be true time after time. The pecking order changed, Tre picked up weights and developed popping pectorals to handle whatever problem came his way, or in the case of his phantom, to compensate for the inmates that short-changed them back in the day. Tre was not always alone though. In the third year of his sentence a boy one year older than him came into the detention centre. The boy’s name was Chevron and allegedly was a part of the Block Boys Tre once new, who were now a full-fledged gang. He immediately gravitated toward Tre, giving the young boy some further reputability inside the detention centre. Though Block Boy Chevron’s sentence was a feeble year compared to Tre’s lifetime sentence, even when he left, word of Tre’s associations remained. He was not proud of it, but he took advantage of the respect nonetheless. With this new freedom, Tre was able to reform back to his former ways somewhat. He took intensive studying sessions in his free time and though he always knew he had a fascination for science, he discovered that he had a pension for physics in particular. His academic progress became hard to ignore and so he was given his age range exams to take, only to pass them all. This was a notable and uplifting achievement for the young teenager who was conditioned to believe his life would play out in the darkness from the fading light of his former life. 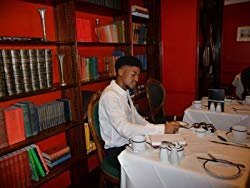 About the Author
L.K. Brooks-Simpson is a native of London, England. He is an English Literature graduate and Film Production student.

Aside from his creative ventures, he is a strong supporter of philanthropy. He cites his biggest influences as J.R.R. Tolkien, Sanyika Shakur, J.K. Rowling, Tsugumi Ohba, Stan Lee and Maya Angelou, among many others.

Three sentences he would use to describe himself – A book is for the mind. Travel is for the heart. Family is for the soul.

Lara has always considered himself a student of literature and story form and for this reason, his taste is eclectic. Ranging from novels to manga – poems to screenwriting and even comic book story boards. Just as genres define certain works, there are a lot of elements that define his creative process. He has aspirations to write in many different genres..