Welcome to the blog tour for UNSTOPPABLE, the third book in the adult contemporary romantic suspense series, Untouchables, by Cindy Skaggs. See below for information the book and series, buy links, an exclusive excerpt, and details on her giveaway. 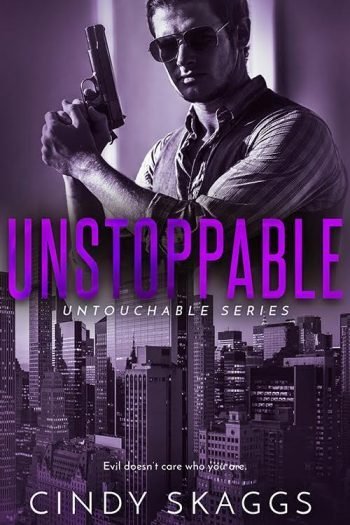 Synopsis
Bad boy Mick Donovan has dedicated his life to avenging his brother’s death, even aligning himself with an FBI Task Force to achieve his ends. Which leads him to the mess he’s in now–undercover as the husband of the woman he’s been fantasizing about, despite knowing how off-limits she is, to protect an innocent child.

After an ambush, Destiny Harper is on the run and out of places to hide from a ruthless drug lord hellbent on claiming his son. Charged with protecting the boy, Dez lands in the mountains on a collision course with Mick, a blizzard, and a past she’d rather forget. But even as the close quarters ignites the passion between her and the sexy biker, she knows there’s no future with him. Mick will sacrifice everything for revenge—even her.

Excerpt #1
Mick released her wrists to settle his large hands at her waist. “Put your hands on me, Destiny. I’ve dreamed about it long enough.”

Nerves fluttered through her chest like hummingbird wings. Had he really dreamed of this? Of them? Knowing he wanted her—had fantasized about her—grabbed her by the throat. She tilted her head to look him in the eye. His eyes were varying shades of amber, like a polished piece of tiger’s eye. Hard, like the stone, but with hidden pockets of dark and light. How had she never noticed before? How had he never drawn her in with the mesmerizing depth? The pupils were enlarged with desire and his lids dropped low. He licked his lips and her body clenched in response.

Screw it. Sometimes on a mission you had to improvise.

Decision made, she made the first tentative swipe across velvet skin. Muscle bunched and twitched beneath her fingertips. The Celtic sleeve wrapped around his shoulder and swooped down to circle one side of his massive chest. The dark ink lifted the skin slightly like reading braille. Dez paused, rubbed her thumb over the dips and ridges. It was exactly like reading braille. Mick’s emotions were literally on his sleeve, penetrating his skin like an ancient text. The man didn’t talk much, but his body art spoke for him. He had untapped depths which drew her as much as the muscles and the ink.

His body was every girl’s wet dream, but his heart was raw emotion. The tattoo was intricate, symbolic, showing anyone who dared to look close enough the soul of this interesting, complex man. She trailed her hands down his sides; let her thumbs smooth across his abs. They jumped beneath her caress, feeding a compulsion she couldn’t deny. Her hands weren’t enough. She wanted to climb inside his skin; wanted him under her skin, inside her in every way she could take him.

Drawn, she leaned close and pressed her lips to the tattoo that knotted over his heart. The heavy beat of his pulse thumped under his skin, against her lips, jumping to a faster tune as she tasted and explored. His hands skated under her sweater to brush bare skin. The touch was light, a contrast to such a hard, rough man. The caress moved up her sides, down her spine, to repeat, each sweep grazing closer to her breasts, building want like a hunger inside her. Her tongue grew more demanding against his flesh, until she nipped the skin and his muscles jerked in response.

It was heady stuff for such a strong man to quiver at her touch. Intoxicated by the power, she grew bolder; clamped her lips around his nipple and pulled. He sucked in a breath and yanked her close so his erection flexed against her stomach. In a swift move, he yanked the sweater over her head, had her bra off before she’d registered the cool air against her back. She’ll do whatever it takes to find her son – Lie. Cheat. Steal. Seduce…

As the former wife of an infamous crime boss, Sofia Capri is untouchable. She exists outside of the law…and outside of the criminal world. When her son is kidnapped, Sofia’s desperate to find him. She’ll do anything. Lie. Cheat. Steal. Anything but trust. But it’s a strikingly handsome FBI agent who’s her only chance to get her baby back…

Something about Sofia’s fiery beauty must be hitting all of his weak spots, because suddenly Mr. Law And Order Logan Stone finds himself bending the rules. When they’re implicated in the kidnapping, Logan and Sofia discover a horrifying reality – they have less than 72 hours to find the boy and clear their names.

Now the heat is turning up…and time is running out…for everyone..

Synopsis
Sofia Capri survived life as a mob wife, but living with drop-dead gorgeous FBI agent Logan Stone has its own challenges. Step one? Host his family for Christmas dinner.

Rescuing Sofia from her former mob life and saving her kidnapped son was enough to earn Logan a place in her life, but a mysterious phone call before dinner threatens the security he’d give anything to provide.

When Sofia’s son and Logan’s nieces disappear from the festivities, the illusion of a normal Christmas shatters, hurling Sofia back into her nightmares.

Synopsis
Vicki Calvetti made it out of the mob—or so she hoped. But when the old family hitman, the FBI, the Justice Department, and a smoking hot man from her past crash land on her doorstep, she learns she’s not quite done.An undercover cop chasing revenge, Blake Reilly gets the shock of his life when Vicki walks back into his life and into his club full of more drug dealers than a pharmaceutical convention.

Catching up doesn’t take long, and their undeniable chemistry is full-speed-ahead until someone ends up dead, putting both their lives at risk unless Vicki can remember the secrets she paid to forget.

About the Author
Cindy grew up on stories of mob bosses, horse thieves, cold-blooded killers, and the last honest man. Most of those stories were even true. She has ten siblings, some of whom are older than her mother, has nieces and nephews older than her, and once went to a horse auction with John Wayne. Well, with him in the sense that he was there, and she was also… there. She was the munchkin in line for his autograph with tangled hair and bruised knees that liked to dance on her daddy’s dusty cowboy boots and listen to his tall tales.

With her love of storytelling and heroes, it’s no wonder she turned to books and stories after her father died. She skipped most of the eighth grade to bury herself in books while hidden in her closet, because she was still looking for the perfect story and the last honest man. Her search took her around the world with the Air Force as well as around the world with her education. She’s visited more countries than she can remember, nearly every state in the U.S., and has more degrees than the Tin Man.

As a single mom, she’s still gambling, betting on herself for the first time in her life, turning her lifelong love of storytelling into the one thing she can’t live without: writing. She writes 10,000 words a week in cafes and coffee shops, and some of those 10,000 words are even worth reading. She has an MA in Creative Writing, is working towards her Master of Fine Arts, and has three jobs, two kids, a Pushcart Nomination, more pets than she can possibly handle, and more works in progress than the crew filling potholes after a long Colorado winter..