Welcome to the book blitz for H.A.L.F. ORIGINS, the third book in the young adult science fiction romance series, H.A.L.F., by Natalie Wright. See below for information on the book, buy links for all three books in the series, an exclusive excerpt, and details on her giveaway. 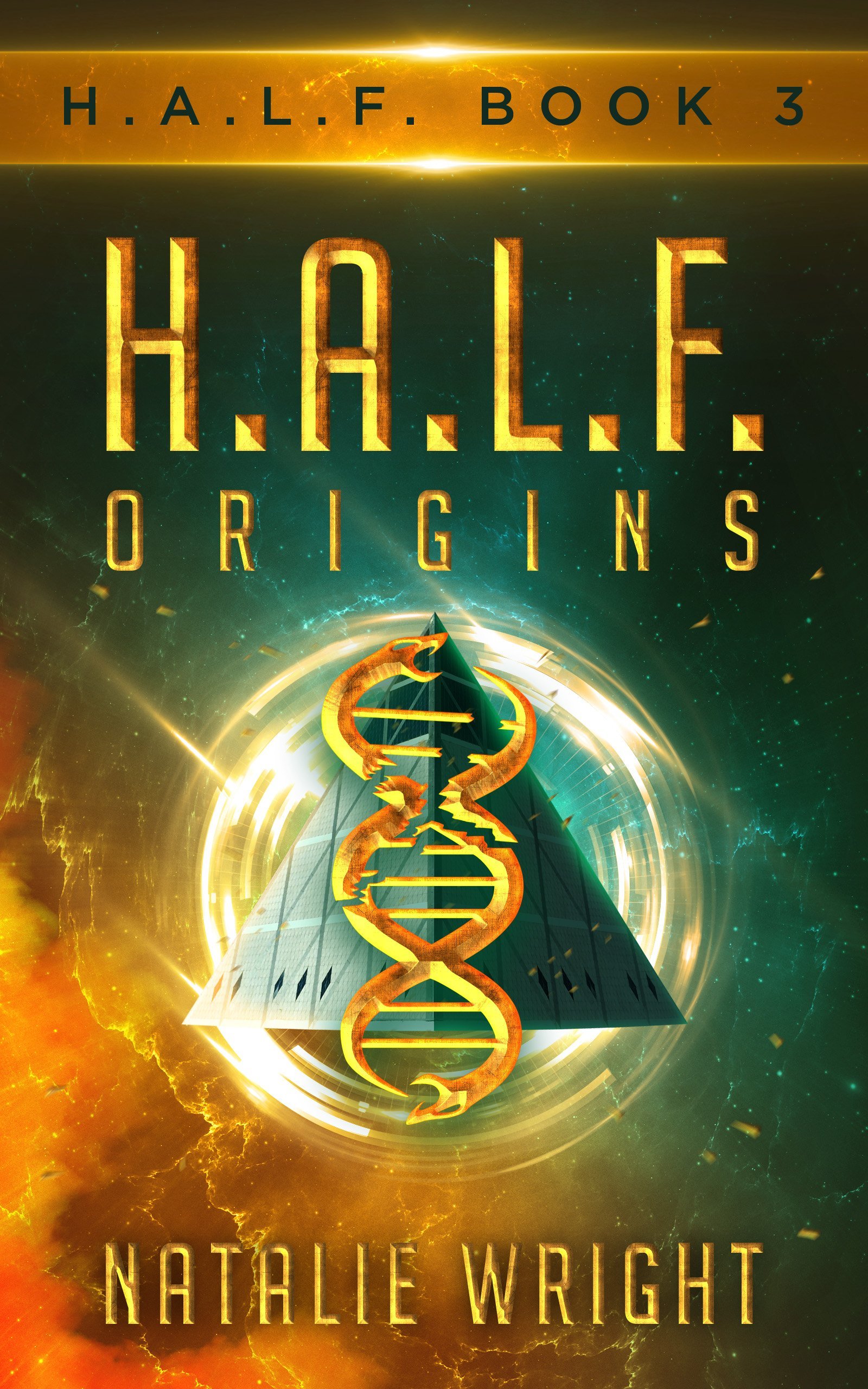 Synopsis
Alien predators attack Europe. A deadly virus spawns an epidemic. And a clandestine organization conspires to profit from chaos and forge a New World Order.

In this heart-pounding finale of the H.A.L.F. series, Tex, Erika and the rest are in a race against time. In books one and two they fought for their lives. Now they battle to save us all.

Tex and Erika are again fugitives and running for their lives. But when Tex falls gravely ill, a Navajo healer is his only hope for survival. Tex emerges changed in mind and body but with vital information: how to stop the predatory M’Uktah from destroying those he has come to love.

Erika Holt seeks a respite from the threats to her life but hasn’t given up. As she and Tex launch a mission to shut down the galactic highway used by the invaders, she grows closer to her troubled human-alien hybrid companion. But what about her on-again, off-again boyfriend Jack?

Jack Wilson, along with his new friend Anna Sturgis, is determined to put an end to the Makers’ schemes for world domination. Complicating matters, the valuable medicine to counter the alien virus has been stolen.

As both alien and human forces line up against them, the destiny of all mankind is hand the hands of these young warriors. And time is running out.

“The latest satisfying addition to the H.A.L.F. series has something for everyone: exciting action scenes; great love stories; fascinating new aliens; and relatable characters fighting to save the world and find their places in it.” ~Alyssa H., Red Adept. Raindrops pelted the windshield of the rust-bucket truck Erika had borrowed from Ian’s dad. Nearly an hour had passed since she’d seen the lights of the last police car recede in her rearview mirror, but her fingers still shook as she turned on the windshield wipers. They were little help. The spittle of rain turned the dusty windshield into a muddy mess, and the sun-rotted rubber of the wipers streaked the glass.

The jacked-up truck tackled the harsh terrain of the desert like a pro. The police cars were no match for barrel cacti and creosote bushes as large as small cars. The local Ajo police that had tried to stop them likely didn’t know that they were chasing a human-alien hybrid that had escaped, again, from a secret underground lab controlled by the clandestine organization known as The Makers. The Makers had surely spun the lies necessary to convince local law enforcement that Tex was a dangerous fugitive. Ironic. The lie had become the truth. Erika and Tex were, in fact, fugitives on the run and again fighting for their lives. It was like déjà vu all over again.

Erika’s bottom was bruised from bouncing on the seat. Her wrists ached from gripping the wheel. After nearly an hour of rough riding, they hit a two-lane road going east. Erika was heading to New Mexico, where her Aunt Dana, her father’s sister, lived. Without complications, they would get to Aunt Dana’s in about eight hours. If she’ll have us.

Tex had been quiet but awake as Erika navigated the bumpy ground. Once they reached the smooth pavement, he tucked his knees to his chest, hugged his arms around his legs, and became a silent egg-shaped blob on the seat next to her. Erika had seen him withdraw into himself before, but he was even more quiet and still than usual.

Erika wished he’d have stayed awake longer. She wanted to pry answers out of him. She had questions about his time with the Conexus, when he had been linked directly to their hive-mind collective. Ever since Dr. Randall had unhooked Tex from the Conexus, he was acting distant and short-tempered. Erika wondered what had really happened to him during his time with the Conexus. And what did he mean when he spoke of struggles for humans to come and the knowledge he got from the Conexus? She hoped he would answer these questions and more when they got to Aunt Dana’s.

The dribble of rain became a hailstorm. Peanut-sized ice balls pinged the metal roof of the truck. Within minutes, the hail turned into a deluge. Erika turned the wipers to full blast, but that only smeared the windshield faster. The Tex blob remained eerily quiet and unperturbed.

Erika’s swollen right eye, a gift from one of the Makers’ guards during their escape from the school, made it difficult to see. Both eyes were heavy with fatigue. She blinked rapidly and shook her head, trying to clear the drowsiness. She switched on the radio, and raucous Tejano music blasted. She wasn’t a fan of the accordion-heavy genre. The ancient truck speakers distorted the sound, making it nothing but noise to her ears, but at least the booming music helped keep her awake.

Erika had never been much of a life planner. Her current situation of living day-to-day did not bother her as much as it might have irritated some people. She was focused on her current task, getting Tex safely to a location where he could heal. She’d help him find a place to stay hidden from the Makers and Sturgis. She wasn’t sure what came after that. Just stay awake. And alive.

Tex didn’t stir or acknowledge the radio. Is he dead? She poked at him with a finger. “Tex? You okay?”

With his head still to his knees, his voice was muffled but cool and even. “I am alive if that is what you mean.”

“You’ve been so quiet. With the escape back there at the school, the dogs, and now the rain… I was just hoping that you’re all right.”

Tex raised his head slightly and turned toward her, his large eyes peeking over his arm. “I have been through worse.”

The understatement of the century. She’d been through worse, too: the days of fever she endured after the Conexus gave her the virus, the long hours of watching Ian wracked with pain when she could do nothing but watch him inch toward death, weeks of hunger and thirst. She had been forced to take the lives of others or lose her own, and she had watched her mom breathe her last breath. They’d all been through hell and back.

Tex’s indifference was still better than silence between them. The tinny horns and the beat of the music stopped abruptly.

The radio announcer broke in, speaking in Spanish. “There has been a massive terrorist attack in Europe. The entire continent is without power. Communication systems are down. Though reports are sketchy, US authorities state that the attacks appear to be focused on London and Paris.”

Erika’s chest tightened. For a moment, she forgot to breathe. “He said that communication systems are down in Europe and there’s been a massive terrorist attack. The terrorists hit London and Paris.”

Tex unwound his arms from around his legs. “I understood what he said.” He sounded condescending, as though everyone could understand Spanish as well as English.

“You assume a great many things.”

Erika didn’t know what he meant, but she was more worried about what the heck was going on in Europe than her traveling companion’s surly attitude. The radio announcer spoke of the apparent sophistication and coordination of the attacks. He stated that the terrorists had clearly used an advanced technology that took out the power grid across Europe. Terrorists with advanced technology? Could the Makers be behind this?

Continuing in Spanish, the announcer said, “The US has raised the terrorist alert level to high and has closed all borders, effective immediately. There are reports of disruption to GPS and cellular service in the United States, indicating possible destruction or interference with multiple satellites.”

“Just what we don’t need. First the virus to deal with, now terrorists run amok.”

“It is not a terrorist attack,” Tex said with total conviction.

“You just heard the guy say it’s a terrorist attack. He said the report came from NORAD.”

“Then this NORAD fellow is wrong… or lying.”

During her time at Casa Sturgis, Erika had lost most of her faith in the authorities. Getting locked up in an underground city run by crazy government scientists and black-budget military would do that to you. Even if The Makers were behind AHDNA, that didn’t negate the fact that, somewhere along the line, some important people were very corrupt. Maybe even a lot of people.

Even after all she’d seen, though, she still believed most of the people working for the government weren’t crooked, self-serving traitors who would sell out the lives of millions just for their own little piece of the post-virus pie. People like Dr. Montoya worked for the government. Dr. Montoya had risked her life to help them to keep the antivirus out of the hands of the Makers so it could be synthesized to help the masses rather than the elite few chosen by William Croft and company.

“Why would the military lie about terrorists?” she asked. “And if it’s not terrorists, then who would cause a massive power failure?”

“Something far worse than extremists with a vendetta. Pull over. I will drive now.”

“Have you ever driven before?”

Tex shook his head. “Pull over,” he repeated.

“Erika, I tire of questions every time I ask something of you. There is a helicopter on its way. You did not think that the Makers would send only a few local law-enforcement vehicles after me, did you? Shall we argue further? Or shall I attempt to lose those that tail us?” 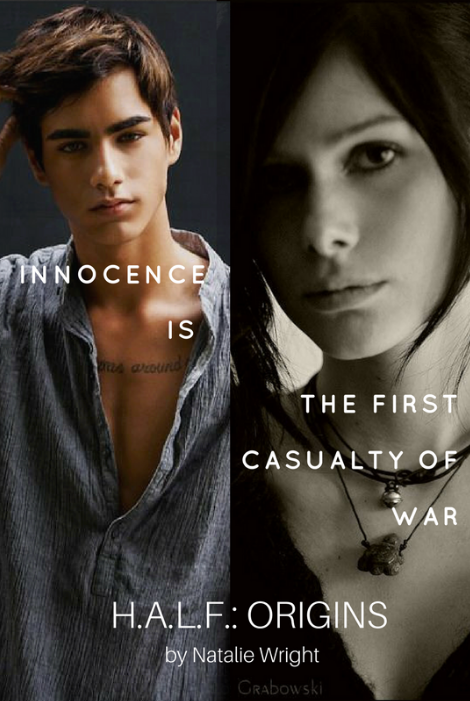 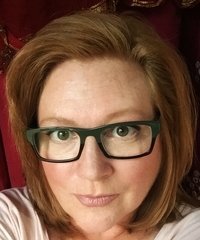 About the Author
Natalie writes adventurous fantasy and science fiction for teens and adults including her award-winning H.A.L.F. series and The Akasha Chronicles. Her first novel, Emily’s House, has been read over 2 Million times on Wattpad!

When not writing, reading or questing in Skyrim, Natalie meets readers and appears on writer panels at comic cons and book festivals throughout the western U.S. She and her mascot baby alien traveled over 10,000 miles in the past year!