Welcome to the book blitz for HUNTED FATE, the third book in the young adult fantasy/mythology romance series, Threads of Moirae, by Jennifer Derrick. See below for information on the book and series, buy links, an exclusive excerpt, and details on her giveaway. 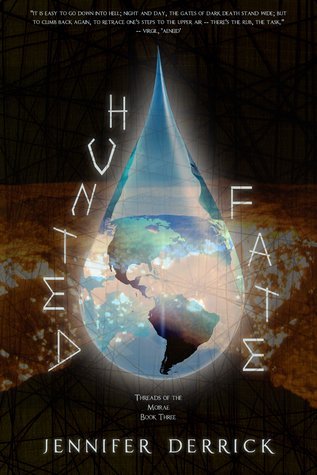 Synopsis
Still reeling after killing the man she loved, Atropos turns her attention to the twin tasks of avenging his death and freeing humanity from the deadly grip of the Keres. When she sets out on a murderous mission to retrieve her shears, her only aide is her temperamental ex-boyfriend, Ares. He is fickle at best, traitorous at worst, and assistance from him may be worse than none at all.

Along the way, she allies with a group of powerful supernaturals and learns that the crimes of the gods are more twisted and far-reaching than she realized. What begins as a quest for vengeance becomes a journey through betrayal, loss, love, and hope. It ignites a war that will pit Atropos against the gods in a battle for the freedom of humanity.

Avenging Fate is the second book in The Threads of Moirae Series by Jennifer Derrick.. 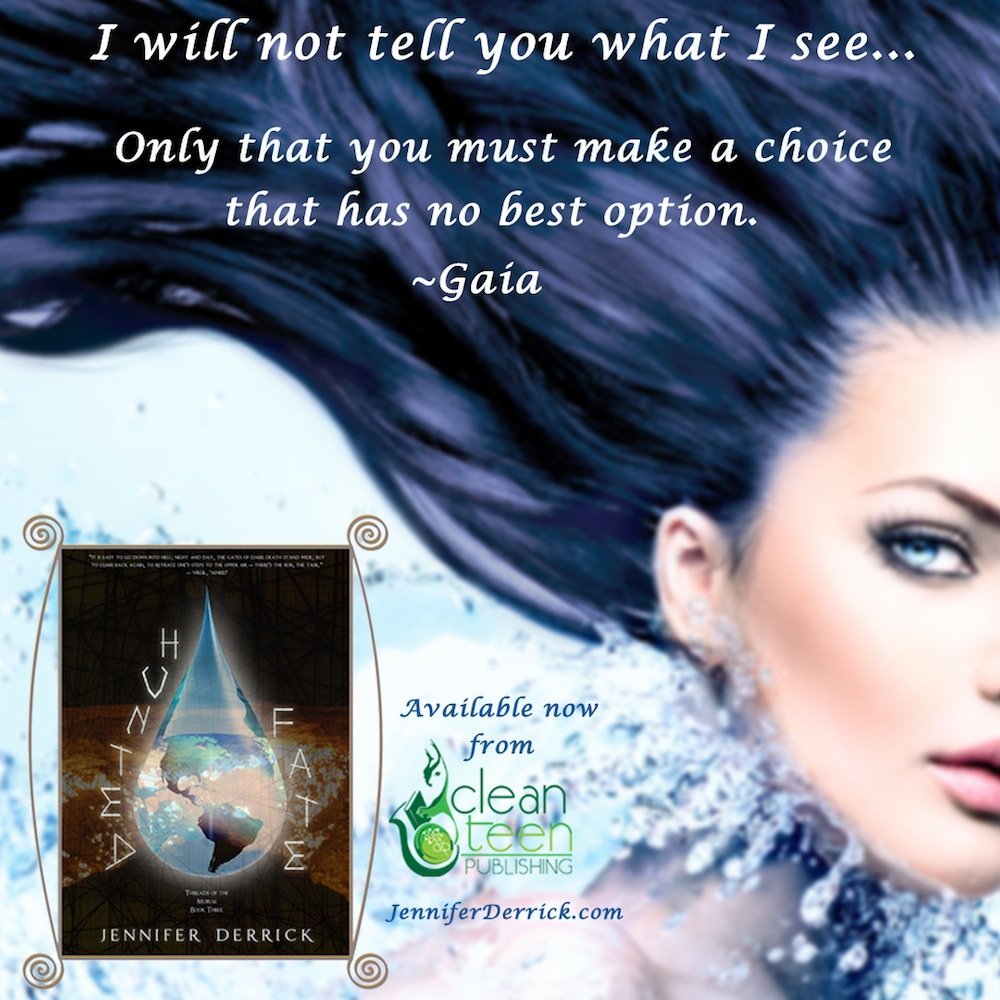 Excerpt #2
“We need whoever provides security around here. Or Hades. They’re bound to be the ones who can open this. If we can find them, we can drag them down here and slap their hand on this thing to get it open,” Alex says.

“We need another way,” Sara says, shaking her head. “We haven’t seen a single person since we got here. It’s too time consuming to track them down. And we’ll never get Hades.”

“Anyone know of any other ways to crack a palm plate?” I ask.

“Short of finding a valid fingerprint and going through an awful lot of steps to create a fake finger, the only other way is to break down the software controlling it,” Alex says.

“Are any of you hackers?”

“I’m not. But there isn’t a lot to do when you’re stuck at home with a terminal disease or trapped in a crappy boarding school. I taught myself a few things, made a few online friends who were a little shady. Depending on how sophisticated the software is, I might be able to crack it.”

“Would it be controlled from the computer out front?”

“It might be. Or it might be controlled from a central server that’s who knows where. No way to know without looking,” he says.

“That computer is password protected. If you try to force it, you may set off alarms.”

“Then I’ll have to be careful,” he says, heading back to the lobby.

We follow and gather around the desk while he works. The keys clack under his fingers as he mutters instructions to himself.

“Okay, I’m in the system,” he says. “While I’m here, I’m going to shut down those security cameras. No need for everyone to know where we are.”

The TV feed blinks and is gone.

He keeps typing and clicking and muttering. The rest of us sit down on the floor and wait. There’s nothing we can do.

“Huh. That could be tricky,” he says.

“What?” I ask, getting up and going around the desk so I can see his screen. Not that the gibberish there means squat to me.

“The system that controls the fingerprint scanners also controls the card locks. Worse, it’s not separated by floor. I’m not good enough to bring down only one piece of the system. It’s all or nothing.”

“It means that the only thing standing between us and whatever is behind those cell doors is the hope that none of them try the doors. If the inmates figure out the doors are open, then security will be the least of our problems. All of them could walk right out of here.”

“Do it,” I tell him. “It’s not like we’ll be broadcasting the locks are down. No one will notice. Hopefully.”

“Okay,” he says and goes back to pounding on the keys.

After a few minutes, the computer beeps and Alex pushes away from it.

The words are barely out of his mouth when a series of small pops echoes around the room. They sound like they’re both surrounding us and simultaneously heading away from us.

“Aw, shit,” I say. “The locks. We forgot they make noise! We are idiots. Come on,” I say, racing for the doors on the right.

We slam through the doors and pull up in front of door number four. No one is coming into the hall yet. I’m hoping the inmates think it’s a trap and are too intimidated to try their doors. Either that or they didn’t hear the locks release. Please, just let me get out of here before hell literally opens, I think. 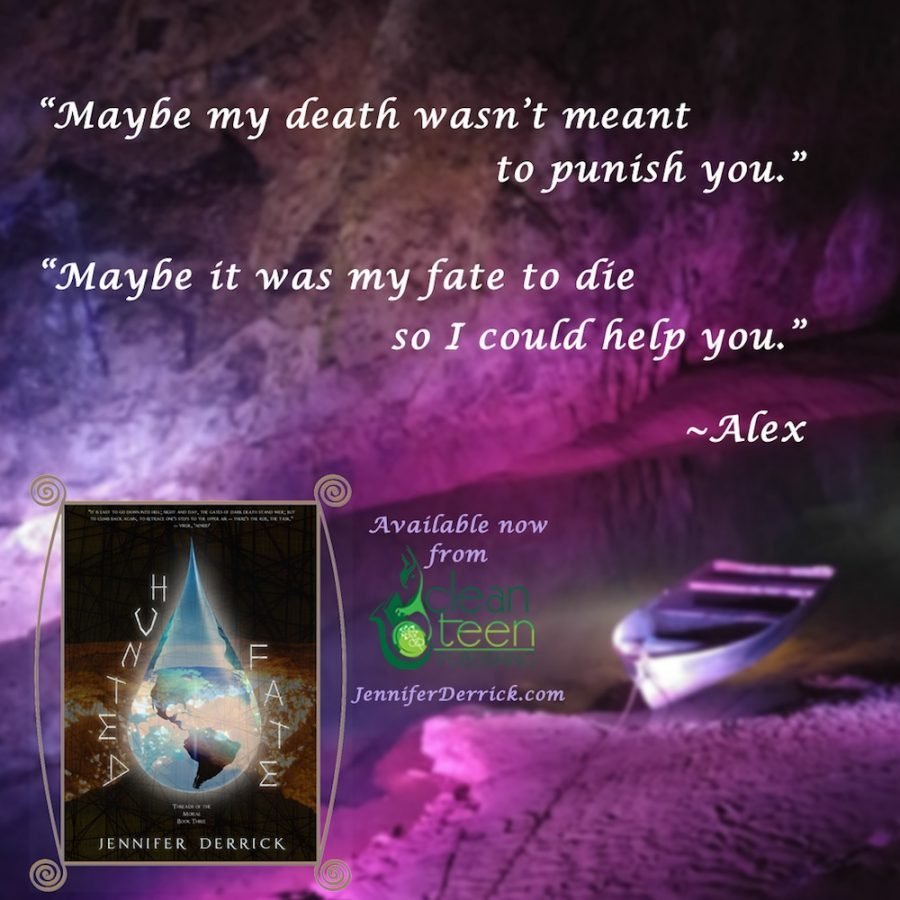 About the Author
Jennifer is a freelance writer and novelist. As a freelancer, she writes everything from technical manuals to articles on personal finance and European-style board games. Her interest in storytelling began when she was six and her parents gave her a typewriter for Christmas and agreed to pay her $.01 per page for any stories she churned out. Such a loose payment system naturally led to a lot of story padding. Broken Fate, her first novel, earned her $2.80 from her parents.

Jennifer lives in North Carolina and, when not writing, can often be found reading, trawling the shelves at the library, playing board games, watching sports, camping, running marathons, and playing with her dog.