Welcome to the book blitz for PRINCES OF LOWER EAST SIDE, the second book in the adult historical thriller series, Scalisi Family, by Meredith Allison. See below for information on the book and series, buy links, an exclusive excerpt, and details on her giveaway. 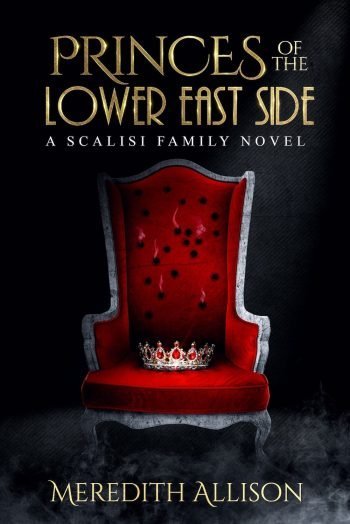 PRINCES OF LOWER EAST SIDE (Scalisi Family #2) by Meredith Allison

Sicily is a paradise on earth Mia Angela Scalisi doesn’t want to leave, but after over a year of peace, obligations—like being Hyman Goldberg’s It Girl at his new nightclub—call her back to New York City.

But everything she’s known in New York has changed…and that might even include the men she once thought were her friends.

When a new, ambitious gangster threatens to take over the old neighborhood, bringing devastation to the poor families who live there, Mia can’t ignore the bonds that tie her to the underworld way of life that killed her brother and set her upon a merciless, bloody path of revenge.

With her brother’s widow, her niece, and a mysterious, devoted bodyguard at her side, Mia must reclaim her position as head of her dead brother’s business, establish herself as the reigning queen among the princes of the Lower East Side, and make the ultimate decision: who lives, and who must die.

Excerpt #1
Gloria said, hands on her hips. “You promised my husband to watch out for me and Em, but he would want me to watch over you, too. You need someone to look after you, Mia. To care for you. Even if you don’t think you need anyone.”

“I have Paolo.” Mia had asked him once if he’d known what she’d done in America. He understood English, so she spoke both Sicilian and English to him. Paolo had responded with a single, firm nod. And that had been the only time they had discussed it—as much of a discussion as could be had with a mute man.

When she’d announced to her family two weeks ago that she was returning to New York, there seemed an unspoken understanding Paolo would also make that trip. Nevertheless, Don Catalano, who had made the arrangements for her, had told her in no uncertain terms the fierce Sicilian man would be accompanying her as her bodyguard and remaining by her side in New York.

She had come to appreciate his silent presence, his protective hovering. It was hard to understand why he had chosen her to devote himself to, but it wasn’t a gift she was interested in questioning.

“I find him the most trustworthy of men for that reason alone.”

“You can’t travel and live on your own with a man you’re not married to,” she insisted. “You’re still just a young girl, after all.”

“I’ll be twenty-three in September.”

“You are a child,” Gloria repeated softly.

Mia smiled, a little bitterly, down at her small case of cosmetics, dropping the envelope on top. When she was a child, she’d lost both of her parents—her father to a heart attack when she was just a toddler. Her mother had died in a terrible fire at the Triangle Shirtwaist Factory, leaping from the top of the building in order to avoid being burned by the flames. Mia and Nick had been forced to hustle the streets, begging for handouts, learning poker to swindle the gangsters, stealing food, freezing nearly to death in their filthy tenement. She’d become a vaudeville performer, because young girls telling raunchy jokes to older men made money. When Nick had been drafted to the war, she’d worked a dozen hours a day for an abusive woman in a dress factory, just to keep a little food in her stomach. She’d known more about being an adult at twelve than most women her age knew now. Once she might have been proud of that, but now, it only made her sad.

Finally, she looked at Gloria. “I haven’t been a child for a very long time.”

About the Author
Meredith Allison has embraced her nerdiness from youth, with minor jaunts of attempting to be “cool” during high school and college. Spoiler alert: she was unsuccessful at fooling anyone. After this dark period, she returned to the light, embracing her bookish nature and penchant for action and horror films, bloody survivalist video games (she’s looking at you, Resident Evil and Call of Duty) interspersed with the occasional sweeping fantasy adventure RPG (Final Fantasy, anyone?). Along the way, she developed her knack for storytelling, which began when she was a mere child-person many moons ago.

Meredith is a writer (and reader) of many kinds of fiction, but in particular spy thrillers, military-esque suspense, and historical crime. A native of Lincoln, Nebraska, she is by proxy a Huskers fan (GO BIG RED!), as UNL is her undergraduate alma mater, and moonlights as an obligatory Blue Jays fan due to completing her graduate MFA studies at Creighton University in Omaha, Nebraska.

When she emerges from her writing cave, blinking in dismay at having to be exposed to the cruel light of day yet again, she can be found romping with her two Pomeranians, serving her overlord cat, hanging with her husband, battling it out with the undead or practicing a new kind of magery on her PlayStation, or simply huddled in a dark corner somewhere with just enough light to read a favorite book. Other interests include baking, cooking, and blogging about new restaurants.