Welcome to the book blitz for THE MOVE, the second book in the adult contemporary romantic comedy series, Creek Water, by Whitney Dineen. See below for information on the book and series, buy links, an exclusive excerpt, and details on her giveaway. 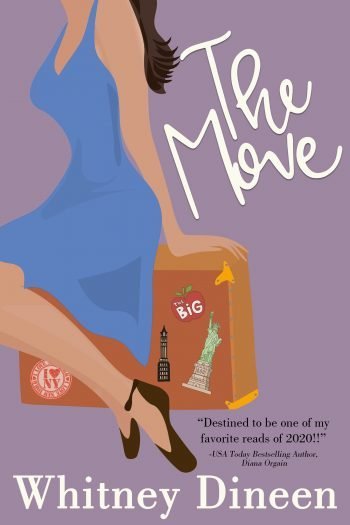 In your thirtieth year, once the dog jumps over you, your life will change in the most unexpected ways.

Lexi is thirty now and the following unexpected things have occurred:

•While walking through Central Park enjoying a beautiful fall day, Lexi eats dirt when a careless dog owner throws a frisbee at her head. A dog jumps over her.
•Lexi gets a promotion that pays less than her current job.
•Her crush announces that he’s engaged.
•Her apartment turns condo and she can’t afford the down payment.

In order to escape her bad luck, she takes a vacation to visit a good friend in Creek Water, Missouri. But as it turns out, fate has a lot more in store for Lexi Blake.

Will a good friend, an unexpected love interest, and a historic house have her scrapping her plans and moving to a small town on the banks of the Mississippi River? Find out in the delightfully funny rom-com that’s sure to make you believe in happy endings! I ignore his question. When we reach the third floor, I say again, “No need to walk me to the door.”

He ignores me now and trails after me. Once we get to Bertie’s door, I thank Beau for what I hope is the final time. “Goodnight, and thanks again.” I sound more annoyed than grateful.

He still doesn’t seem to be ready to walk away. Instead, he turns me so I’m facing him. What I see in his eyes makes my knees go so weak I almost keel over. He pulls me closer, and as his mouth hovers a mere whisper above mine, he tells me in a low voice, “I had a wonderful day, Lexi. Thank you very much.”

Then, hand to God, the man leans down and kisses me so tenderly, so heart-meltingly, I forget to be outraged and pull away, or smack him for his impertinence. Instead, I lean into him and encourage him. It is the best, most tantalizing kiss I’ve ever been party to in my whole life, and it’s all I can do not to jump into his arms and devour him whole.

The encounter lasts for a very long time. It begins as a peck, turns the corner on a respectable first date smooch, and quickly enters territory that I’m sure is full of signs that read Danger! Violators Will be Towed! and Trespassers Will be Shot! On and on it goes and I do nothing to stop it. In fact, it’s Beau who finally pulls away.

When he does, we’re leaning on each other with both of us panting for more. He finally manages to say, “Come down to the office at nine in the morning and we’ll drive over to the house together for the inspection.”

I make this sort of grunting, growling sound that’s meant to mean, “okay,” but I’m not sure it’s successful. Beau takes the keys out of my hands and opens the door for me. Then he kisses me again, quicker this time, before turning to walk back down the hall.

I have no idea what just happened. Well, I mean, I know what happened, but I don’t know why I allowed it to happen. I don’t believe in fooling around with someone who’s already taken, so I need to make sure whatever it was, there isn’t a repeat performance.

If Regina’s taught me one thing, it’s that women are a sisterhood, and we owe it to one another to have each other’s backs, no matter what kind of temptation Beau Frothingham is. And while I know this in my bones, my imagination takes flight, and it only occurs to me later that I am not angry at Beau one little bit. What does that mean? More destiny at play in the universe or just my fantasies taking flight? 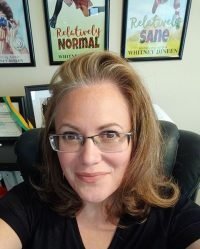 About the Author
Whitney loves to laugh, play with her kids, bake, and eat french fries — not always in that order. Whitney is a multi-award-winning author of romcoms, non-fiction humor, and middle reader fiction. Basically, she writes whatever the voices in her head tell her to.  She lives in the beautiful Pacific Northwest with her husband, Jimmy, where they raise children, chickens, and organic vegetables.