Welcome to the book blitz for THE PRINCESS OF BAKER STREET, a stand-alone young adult LGBTQ+ contemporary romance, by Mia Kerick. See below for information the book, buy links, an exclusive excerpt, and details on her giveaway. 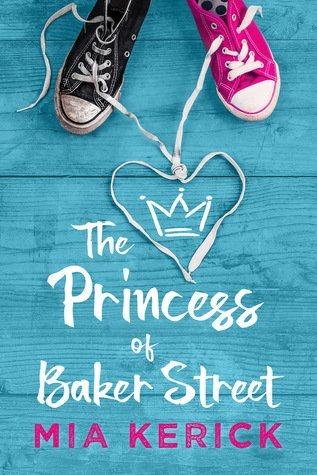 THE PRINCESS OF BAKER STREET by Mia Kerick

Synopsis
Always wear your imaginary crown” is Joey Kinkaid’s motto. For years, Joey, assigned male at birth, led the Baker Street kids in daring and imaginative fantasy adventures, but now that they’re teenagers, being a princess is no longer quite so cool. Especially for a child who is seen by the world as a boy.

Eric Sinclair has always been Joey’s best friend and admirer—Prince Eric to Joey’s Princess Ariel—but middle school puts major distance between them. As Eric’s own life takes a dangerous turn for the worse, he stands by and watches as Joey—who persists in dressing and acting too much like a Disney princess for anybody’s comfort—gets bullied. Eric doesn’t like turning his back on Joey, but he’s learned that the secret to teenage survival, especially with and absent mother, is to fly under the radar.

But when Joey finally accepts who she is and comes to school wearing lip gloss, leggings, and a silky pink scarf, the bullies make her life such a misery that she decides to end it all. Eric, in turn, must decide who he really is and what side he wants to stand on… though no matter what he chooses, the consequences will be profound for both teens, and they’ll face them for years to come.

Is there a chance the two teens can be friends again, and maybe even more?

Excerpt #2
“Joseph Kinkaid, your study buddy is Eric Sinclair. Eric, please join Joseph at the desk beside his with your belongings.”

“Damn it to hell and back,” I mutter, but not loud enough for Ms. Paloma to hear. And for the record, I don’t feel as guilty for swearing as I used to because Grandma’s gone, and she was the only one who cared. And if there’s ever been a good time to say “damn it to hell and back,” it’s right now. But I’m the kind of guy who follows the rules, so I toss my backpack over my shoulder and head to the front of the classroom where Joey’s sitting with the other brainiacs and their new dumb partners.

“Hi, Eric,” he says. I look away but can feel Joey gawking at my face. He’s probably hoping to catch my eye and use his bewitching blue-eyed stare to hypnotize me into longing for the stellar best friendship we used to have.

And the sad fact is I haven’t really talked to Joey since two summers ago. “Hey, Joe,” I mumble. I call him Joe, even though in my head, he’s still Joey. Joe sounds more grown-up. And less girly.

Princess! You used to call him Princess! my insides scream, but I tell them to shut the hell up.

“So I guess we’re study buddies now,” he says. I can hear the smile in his voice. My belly tightens into a ball and rolls over. This situation is risky.

“Looks like it.” I’m fairly sure he’s still watching me, but I decide it’d be better for both of us if I don’t make eye contact with him at all. As in never during this entire semester. Because when I see those sparkling blue eyes, I feel guilty and rotten… and some other stuff. Whatever.

About the Author
Mia Kerick is the mother of four exceptional children—one in law school, another a professional dancer, a third studying at Mia’s alma mater, Boston College, and her lone son, heading off to college. (Yes, the nest is finally empty.) She has published more than twenty books of LGBTQ romance when not editing National Honor Society essays, offering opinions on college and law school applications, helping to create dance bios, and reviewing scholarship essays. Her husband of twenty-five years has been told by many that he has the patience of Job, but don’t ask Mia about this, as it’s a sensitive subject.

Mia focuses her stories on the emotional growth of troubled people in complex relationships. She has a great affinity for the tortured hero in literature, and as a teen, Mia filled spiral-bound notebooks with tales of tortured heroes and stuffed them under her mattress for safekeeping. She is thankful to her wonderful publishers for providing her with an alternate place to stash her stories.

Her books have been featured in Kirkus Reviews magazine, and have won Rainbow Awards for Best Transgender Contemporary Romance and Best YA Lesbian Fiction, a Reader Views’ Book by Book Publicity Literary Award, the Jack Eadon Award for Best Book in Contemporary Drama, an Indie Fab Award, and a Royal Dragonfly Award for Cultural Diversity, a Story Monsters Purple Dragonfly Award for Young Adult e-book Fiction, among other awards.

Mia Kerick is a social liberal and cheers for each and every victory made in the name of human rights. Her only major regret: never having taken typing or computer class in school, destining her to a life consumed with two-fingered pecking and constant prayer to the Gods of Technology. Contact Mia at miakerick@gmail.com or visit at www.miakerickya.com to see what is going on in Mia’s world.