Welcome to the book blitz for HEALTH NUT CAFE, the first book in the adult contemporary romance series, Shadowing Souls, by Rhonda Frankhouser. See below for information on the book, and an exclusive excerpt. 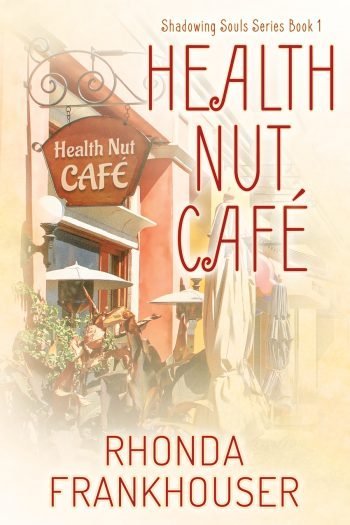 Becka Clemmons’ one true passion is running the Health Nut Café. Awakened every morning by the same nightmare, Becka sees the world through tainted eyes. She’s never believed in fairytale romances until Jonathan Parker walks through the café door one cool, foggy morning. She struggles to understand why this familiar stranger makes her crave things she’s never craved. Solving the mystery of Jonathan is the first thing that has ever taken her focus away from her cafe.

Jonathan Parker is the idealistic son of old money who knows exactly what he wants. Day after day, he searches to find the missing connection that eludes him, until the morning he lays eyes on Becka. He knows his search is over but the struggle to make her believe has just begun. From that moment, he works to prove to Becka that they belong together.

Will Becka let herself believe? Will Jonathan’s family ruin their chance at love?

Excerpt #1
I cupped the cool, clear water in my hands, letting it filter through the tiny crevices between my fingers. I watched a brilliant colored spider make her way across her water-jeweled web toward an unlucky fly. Above me, the sun shone across the mist, creating a rainbow that rippled in three directions. Lying now on a rock at the edge of the pool, I closed my eyes and dreamt of a time when my life would make more sense.

I must have fallen asleep because I jolted awake when I heard a voice from the landing just above where I lay.

“Becka,” the call echoed off the water and walls. At first I thought I was dreaming, so I lay still and let it come. The familiar voice became clearer when my name was called again, this time from a point closer than the last.

“Becka, are you all right?” The deep baritone whisper was so sensual it made me smile. I didn’t open my eyes until I felt a hand caress my shoulder. Even then, I couldn’t believe I was awake.

“Are you all right?” Jonathan removed his pack and sat next to me on the rock, touching my cheek with the palm of his hand.

I gathered everything inside my heart and soul and tried to move away, feeling caged by the intimate way he leaned over me. The concern in his eyes held me down until he saw that I was okay.

“Thank goodness.” He didn’t move away. “I thought you’d passed out again.”

“What the hell?” I sat up straight and scooted back. My voice was controlled, though my question was demanding. “Did you follow me here?”

“I followed you and Annie from the resort, yes. It was your mother’s idea for me to come to Hawaii. She told me where to find you.”

“Why would she do that?” I stood up and took a step away.

“She thought I should come here and talk to you.” He watched me as I slowly put distance between us.

I remembered my mother’s coy smile when she gave me the airline tickets, and I knew in that instant that he was telling the truth. My mother’s meddling frustrated me. “That figures.”

I gazed over his slightly squared, handsome face. Not handsome in the pretty sense, more the serious, rugged sense. His wavy hair was tucked behind his ears, the mist brightening the lighter strands. The eyebrows of a slightly darker shade were manly, but not too bushy. His skin was bronzed with a fresh tropical tan, and those kissable lips were shadowed by a day-old beard. A satisfied smile broke when he noticed my perusal, but I didn’t stop staring until I caught those eyes, the color of the deepest part of the ocean.

“How old are you?” I asked, finding no noticeable wrinkles. The oddness of the question at that particular moment surprised us both.

“Twenty-nine.” He slowly stood up and moved toward me.

“Oh.” I watched him carefully.

“Does age matter to you, Becka?” He raised his hand.

“Does it matter how old I am if you want me and I want you?” He took another small step, closing the distance. “Besides, your mother already told me you’ve only got me by a few years. I like older women.” He winked and flashed that disarming smile again.

Whoa. I swear Silvy. I held up my hand as I took another step back away from him. He watched this with curiosity, not really seeming to take my retreat as a negative response.

Stepping into the cool water up to my knees, I could think of nothing but escape. Even water was better than the lethal energy vibrating around Jonathan. “Do you always blurt out what you’re thinking?”

“You don’t like to answer questions, do you, Becka?” He moved his pack farther up on the rock, slipped off his hiking boots and socks, and followed me out into the pool, wading closer with every step.

“Your questions have no answers, Mr. Parker.” I watched his taut body press against his T-shirt and cargo shorts. “I have a question of my own, if you don’t mind,” I said, forcing my eyes from his body. “Why are you here? Why did Silvy think we should talk?”

“Because your mother thinks we belong together, and you’re just denying it.” Once again without pretense.

“Oh.” My breath caught. “So the two of you decided ambush would be the best way to convince me of this?” My stomach clenched.

“She just wanted you to stop running for one second and listen to what I have to say. She thought Hawaii would be the perfect place for us to have some time alone together without any distractions.”

“Why wouldn’t she let me in on this grand plan of hers?” I wanted to see how he would explain it though I knew this was how Silvy works.

“Because she figured you wouldn’t approve. She told me that you’re not a believer, that you’d be tough to convince.”

“A believer in what?” I knew exactly what he was referring to, but I wanted to hear him say it. I couldn’t believe Silvy had created another disciple so quickly.

“Doesn’t matter. We’ll talk about that later. Right now, I’d like an answer to the question I just asked you.” He stood directly in front of me.

“I don’t remember the question,” I lied, looking away, unable to move when he tilted my chin up with the touch of his finger. My knees threatened to give out from beneath me as he searched my eyes.

“I know you feel it, too. I can see it.” He whispered the words just seconds before sweeping his lips across my forehead. “It almost hurts, the way it feels.” He spread light kisses over my face, first around my eyes, then along my cheekbones, finally capturing my lips gently, tasting them with the tip of his warm tongue.

At that moment, I was frozen in a fantasy dream, being taken by Prince Charming in a tropical paradise. I could do nothing but respond to his wishes. The taste of him was salt and spearmint, his scent an intoxicating manly smell of soap and sweat. I realized I’d closed my eyes, but I wanted to see. I wanted to be sure this was really happening to me, Becka Clemmons, celibacy’s woman-of-the-year.

When I finally found the courage to open my eyes, I saw him then, for the first time without fear in my heart. This gentle man, whom I knew nothing about, had me completely enraptured. I decided to let it happen, to try and satisfy this desperate feeling inside so it would leave me in peace.

I drew my hands up over his strong shoulders, feeling the hardness of his body against mine. I ran my fingers through his hair as though I’d done it a thousand times before. My breasts now melted against him, hard and demanding.

My mouth opened and I willingly participated in our first real kiss. The kiss sent shocks of excitement through every limb of my body, landing a current squarely at the pit of my stomach, where an incredible ache began to grow. I was prepared to drag him on that rock and ravage him. I’d never had desire affect me the way it did with this man. It made no sense to me, but clarity wasn’t important at that moment.

“Becka.” He pulled away suddenly, leaving me desperate to have him back in my arms, desperate to have him. “Can you feel it? This is not the first time we’ve been together. It feels too natural and real.” His hands held my face between them, his eyes nearly wet with pain.

“Please don’t make this more than it is. It’s just desire, nothing more.” Tears ran down my cheeks for no reason I could grasp. I felt the fear coming back to me, replacing the need with its fury. “I…. I can’t, Jonathan. I don’t understand this.” I took his hands from me, biting back regret as I did so – my stomach sick with emotion.

From above I heard Annie calling, the voice of rescue just in time. I backed away slowly, leaving him there once again, alone to face our connection without me, too afraid to face it with him. It was just too much for me. 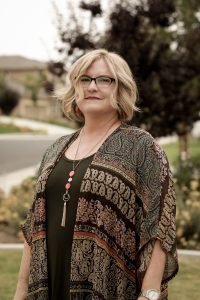 About the Author
Rhonda Frankhouser has been an author with SoulMate Publishing since November of 2016. Her debut novel, Return to Ruby’s Ranch, earned and InD’Tale Magazine RONE Finalist award, and Uncaged Magazine Raven Finalist, and a Books and Benches Reviewer’s Top Pick, Seal of Distinction. Her second release, Health Nut Café, is due out in Fall of 2017. Rhonda lives with her own knight in shining armor in central California, with her two pug puppies, Geddy and Ruby, and their beautiful Labrador, Dutch.