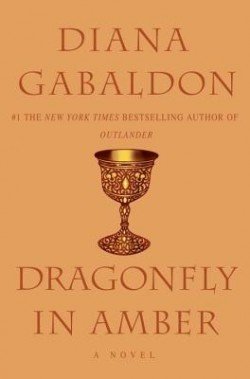 Synopsis
For twenty years Claire Randall has kept her secrets. But now she is returning with her grown daughter to Scotland’s majestic mist-shrouded hills. Here Claire plans to reveal a truth as stunning as the events that gave it birth: about the mystery of an ancient circle of standing stones … about a love that transcends the boundaries of time … and about James Fraser, a Scottish warrior whose gallantry once drew a young Claire from the security of her century to the dangers of his….Now a legacy of blood and desire will test her beautiful copper-haired daughter, Brianna, as Claire’s spellbinding journey of self-discovery continues in the intrigue-ridden Paris court of Charles Stuart … in a race to thwart a doomed Highlands uprising … and in a desperate fight to save both the child and the man she loves.

My Review
Dragonfly in Amber flashes us forward 220 years, introducing us to Jamie and Claire’s adult daughter, Brianna, before sending us back to pick up where Outlander left us. This second installment in the Outlander series has the same intense passion, adventure, danger, and heartache we’ve come to expect from Diana Gabaldon.

Once again, this is amazingly well researched and transports the reader not only through time, but also across the Atlantic to 18th century Scotland and France as well as 1968 Scotland. About the only thing that annoyed me is the bouncing around from Claire’s first person point of view to third person for various characters, and back to first again for Claire. It’s an odd way to tell a story and I found it annoying, and I don’t know that it was necessary to tell the story.

Plot
The storyline is strong and the history insanely accurate. Claire and Jamie attempt to rewrite history and stop the massacre at Culloden in 1745. Even though the reader knows what happens historically, it doesn’t keep us from rooting for them to succeed anyway. The plot is intricate and layered and keeps the reader engaged, although it did sag in a few spots.

The story jumps around from 1968 to the 1940s and back to the 1740s as Claire tells her now grown daughter, Brianna, about her real father, Jamie Fraser, and how she was conceived in 1745 Scotland. It’s a tough sell, as you would expect, not something even a 1968 flower child would easily buy into. Dragonfly in Amber unfolds epically, keeping us on the edge of our seats most of the time.

Characters
The characters we already know and love are back for more and are as three-dimensional as ever. The new characters introduced, including Brianna and Roger, only add to the story. While I found Roger to be irritating, I don’t think that was a problem. Not every character can be perfect, and he does evolve over the series, so I think it’s okay that he starts off less than loveable.

Bottom Line
Dragonfly in Amber is an engaging, well told, and beautifully set story and it gets five out of five stars from me.