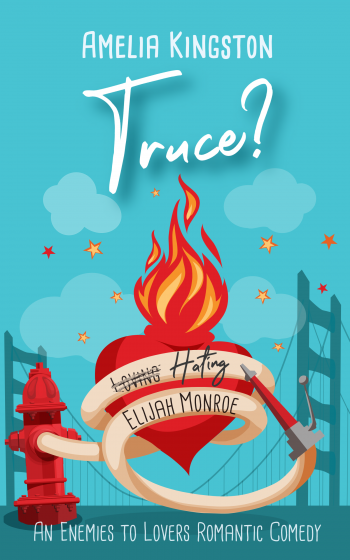 Synopsis
Harper Delaney is a newly certified elementary school teacher with the mountain of student loan debt to prove it. Moving back to her claustrophobically small hometown is about as tempting as two week old sushi, but the allure of free rent and a guaranteed summer teaching job are undeniable.

On the hunt for her dream job in San Francisco, Harper just needs to survive the summer without murdering Elijah Monroe. He may have grown into a scorchingly hot fireman, but he’s still her nemesis. Harper gave Elijah her heart when she was sixteen, and never forgave the jerk for not wanting it. Probably for the best, since he’s also her stepbrother.

Elijah still makes Harper’s blood boil and heart race. And he knows it. She’ll wipe that smug smirk off his gorgeous face before leaving town. The only question is if she wants to do it with a kiss or a slap.

My Review
I love a good enemies to lovers story, and this was that on steroids. The emotions are intense from the moment Harper meets Eli, the teenage son of her father’s soon to be wife. Sixteen-year-old Harper is uprooted from her beloved San Francisco to a small town in the northern part of the state, where the trees are taller, but the people are more infuriating than what she’s used to. When Harper first lays eyes on Eli, she’s head over heels in love. Before he utters a single word, she determines that he is “the one” for her. Her everything. Until he opens his mouth. The hate/love/hate relationship begins with sparks that fly through the entire story. Eli’s father died before Eli was born and Harper’s mom abandoned her and her father, leaving both teens with massive scars. Harper suffers from serious insecurities to the point that all Eli has to do is smile at her and she’s suddenly in love with him all over again. Eli is brooding and moody, running hot and cold. The relationship is so fraught, that Harper flees back to San Francisco as soon as she graduates. After college, she returns to the small town, and temporarily moves back in with her dad, stepmom and step-brother, albeit reluctantly, to take a short-term teaching job while she waits to hear about her dream job at a private school in San Francisco. Because, let’s face it, you cannot afford to wait out a job in San Fran without a well-paying job. Not even with a roommate. When Harper returns, old wounds are still festering, and sparks fly even higher when a now grown Elijah is hotter than ever.

Plot
The plot is primarily the relationship between Harper and Eli, told both in current times as well as flashbacks to when the two first meet. These two timelines are interspersed, allowing the reader to learn the history of their animosity as the anger and resentment continue to unfold in current day. Underlying the main plot is Harper’s future and whether she’ll stay in nowheresville Weaverton or return to her beloved city by the bay. The romance aspect is very back and forth and became like watching a tennis match after awhile. The conflict is not only driven by intense emotions by both characters, but also the “forbidden” nature of their stepbrother/stepsister relationship.

Characters
Even adult Harper suffers from the same insecurities as teen Harper, although she has a better handle on her emotions. Eli is far less brooding, but he’s still got issues and he knows how to get under Harper’s skin, and it soon becomes clear he has insecurities of his own. The characters are the best part of the book, though. They are well-conceived and well-executed, with depth and complexity. My only real complaint is some mild slut-shaming of a young character in the early part of the book. Harper’s internal comments on Athena made it a lot harder for me to warm up to Harper, although I did get there. Part of her judgment, I’m sure, came from her insecurities and seeing this girl as a romantic rival.

What I Enjoyed About TRUCE? HATING ELIJA MONROE
1. The Flashbacks. The history of Eli and Harper’s relationship was key to me understanding who they are now, and why they say and do the things they do. Without those scenes, I wouldn’t have been able to get into either of these characters.

2. Enemies to Lovers. One of my favorite tropes.

3. The Parents. Eli’s mom and Harper’s dad are the sanest people in this story and they are needed to ground their kids and reign in their over-the-top emotions.

4. The Setting. I’m like Harper in that I’m a city girl, but escaping to the small town of Weaverton was a breath of fresh air. The author provides stunning details that makes this fictional town someplace I’d love to visit.

5. Romantic Gestures. I won’t give it away, but there is a scene at the very end that was just so wonderfully romantic it melted my heart. Yay Eli. 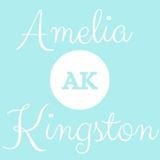 About the Author
Amelia Kingston is many things, the most interesting of which are probably California girl, writer, traveler, and dog mom. She survives on chocolate, coffee, wine, and sarcasm. Not necessarily in that order.

She’s been blessed with a patient husband who’s embraced her nomad ways and traveled with her to over 30 countries across 5 continents (I’m coming for you next, Antarctica!). She’s also been cursed with an impatient (although admittedly adorable) terrier who pouts when her dinner is 5 minutes late.

She writes about strong, stubborn, flawed women and the men who can’t help but love them. Her irreverent books aim to be silly and fun with the occasional storm cloud to remind us to appreciate the sunny days. As a hopeless romantic, her favorite stories are the ones that remind us all that while love is rarely perfect, it’s always worth chasing.