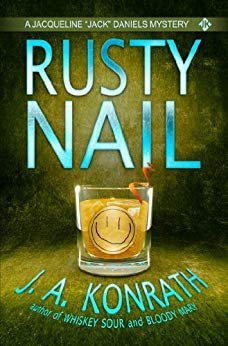 Lt. Jacqueline “Jack” Daniels of the Chicago Police Department is back, and once again she’s up to her Armani in murder. Someone is sending Jack snuff videos. The victims are people she knows, and they share a common trait — all were involved in one of Jack’s previous cases. With her stalwart partner hospitalized and unable to help, Jack follows a trail of death throughout the Midwest, on a collision course with the smartest and deadliest adversary she’s ever known.

During the chase, Jack jeopardizes her career, her love life, and her closest friends. She also comes to a startling realization — serial killers have families, and blood runs thick.

Rusty Nail features more of the laugh-out-loud humor and crazy characters that saturated Whiskey Sour and Bloody Mary, without sacrificing the nail-biting thrills.

This is Jack Daniels third, and most exciting, adventure yet!

My Review
RUSTY NAIL is my first book by J.A. Konrath, and I now consider myself a fan. This is the third book in a series, and it builds upon characters and events in the first two books, but the author weaves in just enough information that I wasn’t lost without recapping everything. Part thriller, part mystery, Detective Jacqueline (Jack) Daniels is faced with a cruel serial killer who has ties to previous cases of hers. As she attempts to track down this new killer, she must determine if it was an accomplice or a copycat of the original. She works with her partner, Herb, a handful of FBI agents, and a collection of officers in various jurisdictions. Interspersed with this is the marriage of her former partner, Harry, a romance with an ex, and coping with her feelings surrounding her mother who is in a coma in a skilled nursing facility.

Plot
The main plot is the mystery, told in first-person POV from Jack’s perspective, as well as various third-person POVs, including the killer. The story moves at a steady pace, building to a pulse-pounding climax. Humor is woven throughout to keep it from getting too dark, and this really helps an otherwise gruesome story from getting too morbid. I prided myself on figuring out who the killer was only to be floored when I was wrong. But in retrospect, everything I needed to know was skillfully placed throughout the story.

Characters
I had some difficulty connecting with Jack at first. She’s rough, tough, and really hard around the edges, but as the story unfolded, I saw softer sides of her, including her visits with her unconscious mother, the way she cares for her mother’s cat, who clearly can’t stand Jack, and even her broken heart. Herb, Harry, and even Harry’s fiancee, Holly, were all fascinating characters that helped make Jack that much more human when she tried her best to be inhuman.

What I Enjoyed About RUSTY NAIL
1. Plotting. Great plot with lots of twists and unexpected surprises.

2. The Ending. I love the way the author wound up the story in a way I didn’t expect.

3. Jack. It took me a bit to warm up to her, but once I did, I loved her more than just about any detective I’ve read in a long time.

4. Harry. Jack’s former partner, Harry McGlade, is a soft, pasty, gross mess of a man, but he has some of the best lines in the book.

5. Evil. The villains on Criminal Minds ain’t got nothin on Konrath’s bad guys.

Bottom Line
Gripping thriller/mystery with great characters and a plot that never lets up. 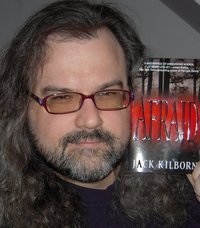 About the Author
J.A. Konrath is the author of eleven novels in the Jack Daniels thriller series. They do not have to be read in chronologically to be enjoyed, but the order is: Whiskey Sour, Bloody Mary, Rusty Nail, Dirty Martini, Fuzzy Navel, Cherry Bomb, Shaken, Stirred, Rum Runner, Last Call, and White Russian. More coming soon.

Other novels include the thrillers Origin, The List, Disturb, Timecaster, Afraid, Trapped, Endurance, Haunted House, Webcam, Grandma?, Holes In The Ground, and Draculas. Other novellas include Fix, Hit, Naughty, Exposed, Rescue, and Wild Night is Calling.

He also writes the Stop A Murder mystery puzzle series, where you become the sleuth and solve brain teasers to try and catch a killer.

And, finally, he writes erotica under the pen name Melinda DuChamp.

Joe writes a lot. You should probably read everything.