I was lucky enough to be able to read and review both of these wonderful new adult contemporary romance novels by author Theresa Paolo. What I love about the series is that both of these books are so different from one another. I look forward to see what else this author has in store for us. 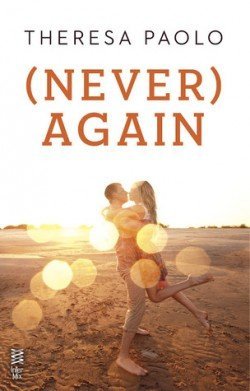 Synopsis
Just when she had finally moved on… …He moved back.

When college freshman Liz Wagner hears her ex’s voice for the first time since he moved clear across the freaking country, she does what any respectable girl would do: Dive into the girls’ bathroom.

Zach Roberts—the Zach Roberts—is back. And he’s everywhere Liz looks—infiltrating her friend group, buddy-buddy with her brother. It’s enough to ruin college altogether. But what choice does she have but to put on a happy face and pretend he didn’t leave her vulnerable and alone in a pile of emotional wreckage?

Pretending works, until tragedy strikes and the only person available for comfort is the one person she wants to stay away from. When Zach turns out not to be the jerk she convinced herself he was, but the boy she used to love, Liz needs to decide whether to open her heart again to the boy who tore it out.

My Review
(Never) Again is a sweet romance that has some intense, serious moments. When Liz runs into ex-boyfriend, Zach, on her college campus, she panics. After all, he’s the boy who broke her heart. Her first love, the boy who left town and stopped calling. She’s understandably pissed and wants nothing to do with him, except he keeps showing up everywhere. He doesn’t seem to care that she has a boyfriend. A boyfriend she loves. Except her love for Joe is vanilla compared to the double-dutch chocolate goodness that was her love for Zach. Was being the key word. She’s over him, right?

Yeah, not so much. Zach is always there for her when she needs him, annoyingly so. It’s clear these two belong together, but Liz isn’t sure she’s willing to take a chance on Zach again. She isn’t sure she can survive another Zach-induced heartache, and she really, really loves Joe. She thinks.

Plot
I love romances about lost loves and second chances, and (Never) Again has all of the ingredients of a really good one.  Liz was devastated by Zach’s leaving and she doesn’t understand why he just suddenly stopped calling her. Zach tries to pretend nothing is wrong, but Liz isn’t afraid to let him have it every chance she gets. Liz knows she never really got over Zach, but she’s sure he’s over her. Why else did he abandon her? It’s obvious to everyone but Liz that Zach still has it bad for her. I knew these two would end up together, I just wasn’t sure how it was going to happen. I definitely enjoyed the story and it’s a fast read.

World Building
Set on the campus of a small college, I felt the world-building was solid. The characters acted and spoke like college students and the settings were authentic.

Characters
All of the characters were very likeable, even Joe. There was minimal growth by Liz and at times, I thought she was being stubborn for the stake of stubbornness, but overall, all the characters were well developed for the roles they played.

Top Five Things I Enjoyed About  (Never) Again
1. Liz’s love of baking. It’s definitely something I can relate to.

2. The bromance between Zach and Liz’s older brother, Josh.

3. The party from hell. It was pretty much every bad party I’ve ever had, rolled into one.

4. The tragic event that brings Zach and Liz together. I won’t spoil anything, but it was really well done and I never saw it coming.

5. Tanya. She could easily have been portrayed as the stereotypical bitchy girl, but I love that she was much more well-rounded.

Disclaimer
I was given a copy of this book by the publisher in exchange for an honest review. 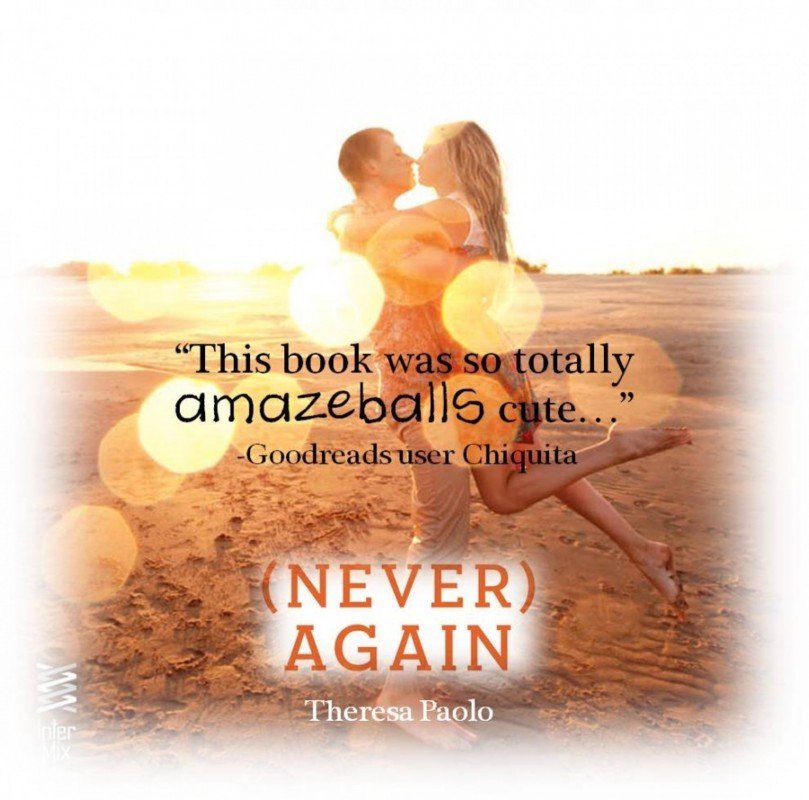 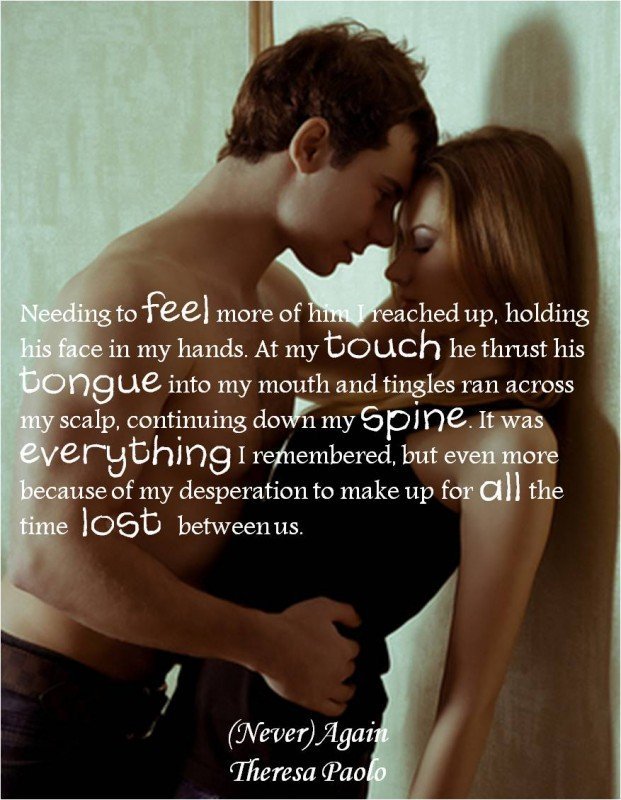 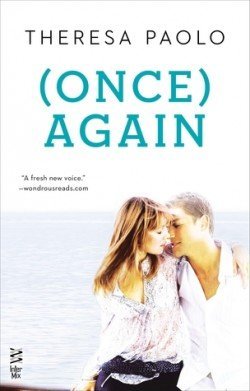 Synopsis
Josh will have to reconcile his past… In order to make Kat his future.

After surviving a real-life nightmare, Josh Wagner is sent home from his dream college on crutches. Bedridden and tormented by flashbacks, he’s just seen his world shattered and his baseball scholarship go up in smoke. Josh’s family hires a health aide to help take care of him, but when he opens the door, the last person he expects to see is his biggest regret…

Katherine Singleton is the only girl Josh has ever loved. Now, even though she’s only taking care of him because it’s her job, Josh is determined to win her back. But Kat had to move on after their breakup two years ago, and despite her feelings for Josh, a lot has happened since he left…

When Kat’s past comes back to haunt her, Josh decides it’s his turn to take care of her. But protecting her—and redeeming himself—will put Josh in the line of fire again. Will he survive this time?

My Review *** Warning *** Spoilers for (Never) Again. Do not proceed if you haven’t read (Never) Again ***
(Once) Again picks up where (Never) Again left off. This time, we follow Liz’s older brother, Josh, as he recovers from a gunshot wound to the thigh. He’s lucky to be alive and knows it, but he’s haunted by what he witnessed when a deranged gunman killed six of his classmates and wounded seventeen, including Josh. His baseball scholarship hanging in the balance being the least of his concerns.

He returns home to recuperate and a home nurse is hired to help out. He’s shocked to discover the nurse is Kat, a girl from his past, the only girl he’s ever loved. In some ways, the themes parallel (Never) Again with Josh being the one that moved on, leaving the girl behind. But there are differences, too. He told Kat to ask him to stay, but she didn’t. He tried to move on, but couldn’t. She’s not willing to let him back in, even though that’s all he wants.

Plot
This story is a lot darker than it’s predecessor. Josh is dealing with PTSD big time and author Theresa Paolo does an amazing job of making the reader feel it. We get deep inside Josh’s head and relive the horror of that day over and over again. Kat is dealing with her own issues. Part of the reason she let him go was because her mother was sick, and she was wrapped up in her own family drama. But it’s more than that, she harbors dark secrets of her own that haunt her dreams. These two have a lot to overcome if they’re going to have another chance. It all builds to a pretty intense climax that is very well done.

World Building
The PTSD was incredibly well done. The author did an amazing job of getting me inside Josh’s head and making me feel his panic, anxiety, and overwhelming intensity.

Characters
Aside from Josh being too emotionally feel-y, the characters are solid. Kat comes across as completely believable in her role, and Josh’s parents are spot on as concerned parents. I love the scene where his mom tells him to “keep it in his pants.” Such a great mother-son bonding moment and I laughed out loud.

Top Five Things I Enjoyed About  (Once) Again
1. The delicate, but emotionally real way that PTSD is dealt with.

2. The continued bromance between Josh and Liz’s boyfriend, Zach.

3. How much Josh loves Kat from early on, the way he pursues her, and is there for her.

4. Watching Kat come alive and stand up for herself at the frat party.

5. The scene with Mia’s mom. So heartbreaking and beautiful.

Bottom Line
(Once) Again is intense, well-written, and touches on a difficult subject with grace and honesty.

Disclaimer
I was given a copy of this book by the publisher in exchange for an honest review. 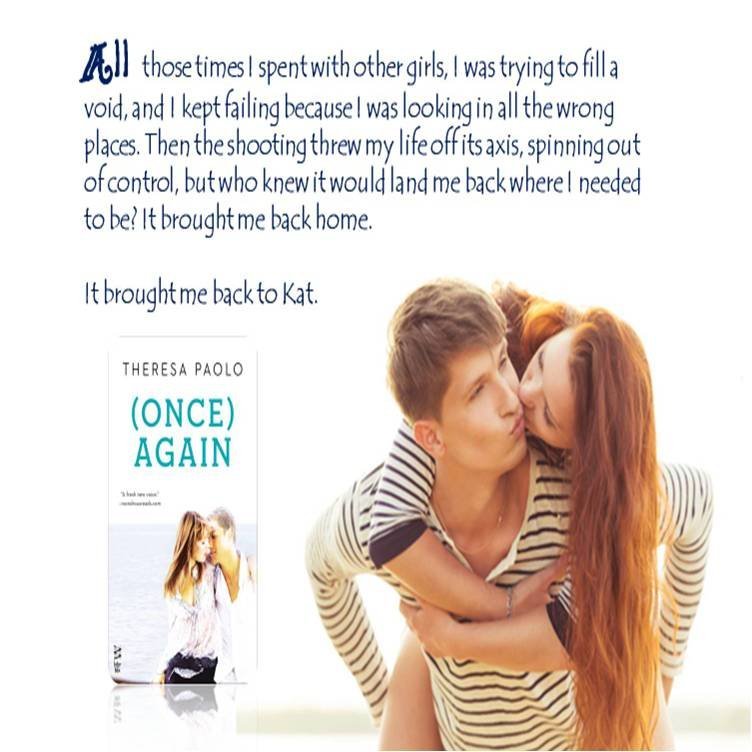 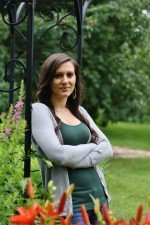 About the Author
Theresa Paolo lives in the same town she grew up in on Long Island, NY with her long time boyfriend and their fish. Her debut novel (NEVER) AGAIN, a NA romance, released in Fall 2013 with Berkley (Penguin). (ONCE) AGAIN release in the summer 2014.

She is also the coauthor of the Amazon bestseller KING SIZED BEDS AND HAPPY TRAILS and BEACH SIDE BEDS AND SANDY PATHS, a YA contemporary series, under her pen name Tessa Marie.

She has a hard time accepting the fact she’s thirty, and uses her characters to relive the best and worst years of her life. She put her love of writing on hold while she received her Bachelor’s Degree in Marketing from Dowling College. When she’s not writing, she’s behind a camera, reading, or online.